June 11, 2012
Today, I welcome historical fiction author N. Gemini Sasson, whose latest release, The King Must Die, the sequel to Isabeau, is out now. As part of the Goddessfish blog tour, she is also giving away a $25 Amazon gift voucher to one random commenter on the tour!

But first, to find out more about her, I've asked her some questions. I hope you'll enjoy the excerpt below, too.

Welcome to my blog. What inspired you to write about this particular period?
Jean Plaidy’s books, which I devoured during my teenage years, introduced me to the Plantagenet kings of England. She and other writers like Sir Walter Scott and Alexandre Dumas were definitely early influences, but the story that inspired me to explore the 14th century and eventually write about it was the film Braveheart. I know, I know, there’s a lot of fiction to it, but it was a very dramatic and moving story. After seeing it, I knew I wanted to write something epic like that. I started out writing about Robert the Bruce and his loyal commander and friend James Douglas, then added Edward II of England. That eventually led me to research and write about Edward’s wife, Isabella of France. Her life had more drama than a daytime soap opera.

How do you weave fact with fiction to create such a fascinating plot?
In historical fiction, the line between fact and fiction is always blurred. To what degree each reader will tolerate is a matter of personal preference. There are some people who want only documented facts in their novels. In reality, that’s impossible to achieve. Every time a writer creates dialogue or peeks behind closed doors, they’re incorporating conversations and personal events that never really happened. Those elements, however, are necessary to effective storytelling. What I do is start with known facts for the framework of my story. Then, wherever there are gaps or if I need to explore a character’s emotions or provide a basis for their motivations, I incorporate a fictional scene. Only rarely do I alter dates, names or facts for effect.
For example, there are several theories as to what really happened to Edward II after he was imprisoned and then forced to abdicate in 1326. I anguished over which theory to embrace when writing The King Must Die, but let’s just say that sometimes what seems obvious isn’t necessarily so. Ultimately, we may never know the full truth, but the past is full of mysteries waiting to be explored.

What is your next writing project?
Right now I’m working on a novel about Owain Glyndwr, the last Welsh Prince of Wales. It’s set in early 15th century Wales and picks up with the deposition of King Richard II of England, grandson of Edward III who’s one of the viewpoint characters in The King Must Die. No title yet, but there are quite a few parallels between Owain’s story and that of Robert the Bruce, who featured in my Bruce Trilogy. One major difference, though, is that Owain was initially a pacifist and thus a reluctant leader, whereas the Bruce was ambitious from the beginning.
After the Welsh novel, I’ll revisit my roots. One of my Scottish ancestors died in the Battle of Flodden Field in 1513 against the English. Now there’s a story waiting to be told.

What are you reading at the moment?
Blind Your Ponies, by Stanley Gordon West. It’s about a high school basketball team in rural Montana and the small town of Willow Creek in which it is situated. Not just about basketball, it’s a very layered book with a big and interesting cast of characters, each with his own story. I tend to read more literary-type fiction than anything, mostly contemporary but sometimes historical, because I like stories that focus on the characters, rather than just whip you along in a frenzied succession of events. 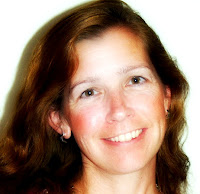 You can’t see me, but I’m chuckling. It’s not very glamorous. The centerpiece of my ‘space’ is a desk made out of a hollow core door propped up on plywood shelves. It’s stained a pretty mahogany color, but the whole thing probably cost about $40 over 25 years ago, when my husband made it during his college days. It’s crammed into a corner of what used to be our dining room. For wallpaper, I tape up e-mails and Facebook fan page posts from readers. Those motivate me to keep writing.
Oh, I also work with a TV on my desk, a view to my garden, two dogs at my feet and a fish tank gurgling behind me. Yet I can’t write a word if someone in the family is looking over my shoulder at the computer screen—go figure. To chase away a nosy spouse or intruding children, I draw a screen between my ‘office’ and the living room. I’m not sure how it happens with all the distractions, but words do appear on my computer screen. Eventually, I have enough of them to make a book.
Thanks for having me, Cathie! It’s been wonderful to visit.

THE KING MUST DIE
by N. Gemini Sasson

BLURB:
What is done cannot be undone.
England, 1326. Edward II has been dethroned. Queen Isabella and her lover, Sir Roger Mortimer, are at the pinnacle of their power.
Fated to rule, Isabella’s son becomes King Edward III at the callow age of fourteen. Young Edward, however, must bide his time as the loyal son until he can break the shackles of his minority and dissolve the regency council which dictates his every action.
When the former king is found mysteriously dead in his cell, the truth becomes obscured and Isabella can no longer trust her own memory . . . or confide in those closest to her. Meanwhile, she struggles to keep her beloved Mortimer at her side and gain yet another crown—France’s—for the son who no longer trusts her.
Amidst a maelstrom of shifting loyalties, accusations of murder propel England to the brink of civil war.
In the sequel to Isabeau, secrecy and treason, conspiracy and revenge once again overtake England. The future rests in the hands of a mother and son whose bonds have reached a breaking point.
~~~~~~~~~~~~~

The Wedding of Edward III and Philippa of Hainault
Edward III – York, January 1328
While a howling wind lashed the snow into knee-high drifts, we proceeded to the castle. Philippa and I rode abreast of one another, our horses caparisoned in heraldic silks, the silver bells attached to their bridles and reins tinkling gaily amid the clamor. It may well have been the coldest and snowiest day in years, but it did nothing to dampen the spirits of England’s people. We dismounted before the steps to the great hall, the bells of York’s churches pealing in celebration. She slipped her hand from beneath the warmth of her miniver-edged cloak. I grasped her fingers and pulled her closer.
“I regret to say,” I whispered rapidly, before anyone could close in and overhear, “that my mother has raised objection to our wedding night being so close to Lent. She thinks we should forego, ah, a certain ‘rite’ in the hopes of receiving God’s blessing upon our union.”
Philippa clasped her other hand over my forearm. “I had not thought of that. Will we not ...?”
Casting a glance around, I guided her up the steps. A pair of porters opened the great doors before us. I shrugged. “Do you want to?”
“I do.” Lowering her chin, she shrank inside her hood to conceal her blushing. “That is, if it would not trouble your conscience.”
“Mine? No.” I scoffed. “Christ himself could not keep me from you tonight.”

AUTHOR Bio and Links:
N. Gemini Sasson is also the author of The Crown in the Heather (The Bruce Trilogy: Book I), Worth Dying For (The Bruce Trilogy: Book II), The Honor Due a King (The Bruce Trilogy: Book III) and Isabeau, A Novel of Queen Isabella and Sir Roger Mortimer (2011 IPPY Silver Medalist for Historical Fiction). She holds a M.S. in Biology from Wright State University where she ran cross country on athletic scholarship. She has worked as an aquatic toxicologist, an environmental engineer, a teacher and a track and cross country coach. A longtime breeder and judge of Australian Shepherds, her articles on bobtail genetics have been translated into seven languages.
Links: 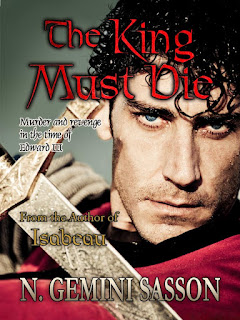 Your chance to win: The author will be awarding a $25 Amazon GC to one randomly drawn commenter during the tour.