A Day out in the Scottish Borders

September 12, 2010
We have been very lucky recently - after a dismal, grey August we are experiencing a lovely, sunny late summer. ~bounce~

So, to enjoy this rare phenomenon, hubby and I took the car for a countryside ride down into the Borders. We came through Roslin, home to Rosslyn Chapel, where we thought briefly of stopping to have lunch but decided against it. Couldn't see many coaches so I guess the main season is over. We haven't been to the chapel in four years - prices are too steep nowadays.

After driving through rolling hills and green fields, passing sheep, cows and a herd of Highland coos we finally stopped off in Peebles, a market town in the Borders. 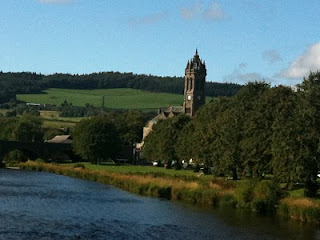 We had been before and liked it as it's a picturesque town, surrounded by green hills, with the river Tweed separating the main hub from a residential area. We enjoyed a pint with a pub meal of generous portions at the Country Inn on the High Street - a cosy, dark pub with wooden panels. Given the size of the portions - hubby had two fishes with his fish and chips and my lasagne, with garlic bread and salad - we passed on the tempting desserts.

Following such culinary exertions we took a stroll through the town. A Walking Festival took place on that day and we spotted a large group of hikers getting onto a bus. Hmm, unless their route took them to the places to walk I found that most peculiar... 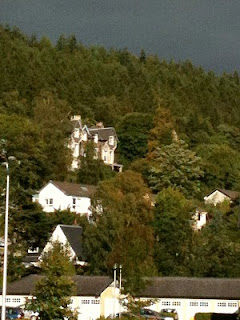 Whilst we were wandering around, the sun went and a downpour started so suddenly, we had barely time to scramble for cover. Two minutes later it stopped. April weather in September. The sun was beating down again and we continued on our walkie. An hour later we paused again at another pub with a large terrace facing west - so we sat in the low sun, enjoying the last warm rays while having a drink. The terrace overlooked the river and beyond you could see the hills in the distance. Absolute bliss! 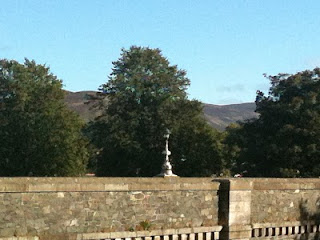 Much later we took the scenic route back, via Midlothian and South Lanarkshire, just to make the most of our drive. It was so relaxing. 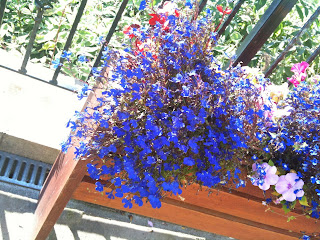