May 21, 2011
Today, while the rain threatened above the Pentland Hills, hubby and I hiked past them to a nearby area called Old Pentland. On his last walk there, hubby spotted an old graveyard, tucked away from the road. Blink and you'd miss it. 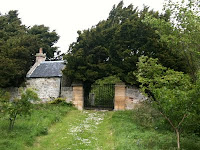 So today we headed there (and onwards to Roslin - yes, that's the village with the famous Rosslyn chapel - for lunch). Having fortified myself with chocolate (what else?!), we finally veered off the main road along the hills towards said area. The area, only a few hundred yards, maybe a mile, from the Edinburgh city bypass, is covered in lush green fields. Happy horses and sheep grazed, dozed or munched as we wandered past them. I could easily live on that side of the city (well, outside the boundaries, strictly speaking). 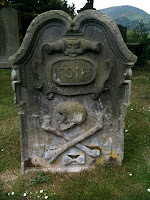 Eventually we got to a small entrance, a gate covered by a tree. The iron gate was heavy so hubby had the pleasure of opening it for me. We walked into another world. Gravestones dating back to 1624 but mostly from the 18th & 19th centuries dotted the grass. Old trees surrounded the outer wall.

A gatehouse stood nearby, where two slabs are kept under lock - deemed to be 13th C! Legend has it that an area of the graveyard not covered by graves used to hold a chapel dating back to that time and apparently used by nearby Knights Templar. Nothing remains of it but there is still the question why a part right in the middle of the graveyard should not contain graves. Intriguing!

We found lots of gravestones with skull & crossbones, and others with trowels and other masonic tools carved on them, the oldest going back to 1624. A fascinating gravestone of a 'tenant of Pentland'. Why were all those tools carved on his stone then if he was 'just' a tenant?? Hmm! 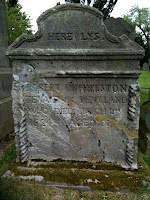 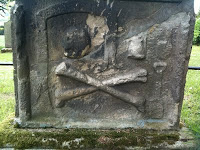 The trees open to one side, revealing stunning views over the Pentland Hills in the distance, probably a couple of miles away, and the meadows before them. What a wonderful place. I should go back, taking more notes. Who knows...

Reluctantly we walked onwards, past some small towns, along a path through lush forests (bleedin' midges!), to Roslin where we had our lunch in the Roslin Hotel. Almost thought we were the only 'locals' there as we heard all sorts of languages around us, including Canadian and Russian.

A quick bus ride later brought us home just in time before the heavens opened. No, not judgment day but plain Scottish rain! ;-)