November 20, 2011
This Sunday I welcome Cynthia Owens to My Place. Cynthia writes wonderful romantic fiction set in Ireland. I have read In Sunshine or In Shadow and loved it.

Over to you, Cynthia!


I believe I was destined to be interested in history. One of my distant ancestors, Thomas Aubert, reportedly sailed up the St. Lawrence River to discover Canada some 26 years before Jacques Cartier’s 1534 voyage. Another relative was a 17th century “King’s Girl,” one of a group of young unmarried girls sent to New France (now the province of Quebec) as brides for the habitants (settlers) there.
My passion for reading made me long to write books like the ones I enjoyed, and I tried penning sequels to my favorite Nancy Drew mysteries. Later, fancying myself a female version of Andrew Lloyd Weber, I drafted a musical set in Paris during WWII.
A former journalist and lifelong Celtophile, I enjoyed a previous career as a reporter/editor for a small chain of community newspapers before returning to my first love, romantic fiction. My stories usually include an Irish setting, hero or heroine, and sometimes all three. My novels, In Sunshine or in Shadow and Coming Home, are set in post-Famine Ireland, and are available from Highland Press.
I am a member of the Romance Writers of America, Hearts Through History Romance Writers, and Celtic Hearts Romance Writers. A lifelong resident of Montreal, Canada, I still live there with my own Celtic hero and our two school-aged children.
My Place:
Welcome to Ballycashel, the wind-swept, West of Ireland village where my Irish historical romance novels, In Sunshine or in Shadow and Coming Home take place.
Ballycashel (in Irish baile caisleán) means “town of the castle.” It’s located nine miles from Galway City on Ballycashel Bay. The main village includes Ballycashel House, where Rory O’Brien, hero of In Sunshine or in Shadow, and his family live, many small tenant farms, and Donahue’s Pub.
Myths and legend abound in Ballycashel. Ballycashel House sits on the castle ruins of the ancient Celtic King, Sean Donnelly. It’s said that the ghost of that chieftain appears to forewarn of a death in the family.
That’s not surprising. Situated as it is near the Atlantic Ocean, Ballycashel can certainly seem haunted on a dark night, when the wind sighs through the trees and a cold mist blows in off Ballycashel Bay.
But it’s that very bay, and the sea that feeds it, that was the salvation of the village. During the Famine, the people of Ballycashel were able to harvest the fruits of the water, from oysters to mackerel to the dulse (seaweed), dragged in by the frequent storms.
“The town, with all its residents, was at times like one character in itself.” ~ Kenda Montgomery, Author, on In Sunshine or in Shadow.
Ballycashel is, of course, a fictitious village, but it’s based on many such villages in salt-sprayed western Ireland.

This is Dunguaire Castle, the model for my Ballycashel House.
Blurb:
“A woman’s love is strong, more powerful than all the ghosts in Ireland…”
Daughter of an Irish village girl, step-daughter of the landlord, Ashleen O’Brien has lived between two very different worlds. But after a year in America, she yearns to return to the green land that is her heart’s home.
War and betrayal have taken everything from Cavan Callaghan – his home, his family, and the woman he loved. A hero of the Irish Brigade at Antietem, he’s searching for the family he never knew.
Love and deception await Cavan and Ashleen along those emerald shores, as the ghosts of a past that can never quite be forgotten rise to threaten their newfound happiness.
Excerpt:
The Atlantic Ocean, 1867
He was going home.
Home. Such a simple word. And for so long now, such an unattainable dream.
Yet as he stood on the deck of the Mary O’Connor, he thought maybe he’d finally find a real home once again.
When Johnny comes marching home again . . .
He looked seaward. The salt wind tugged at his hair. Spray stung his eyes. Gulls wheeled and shrieked overhead. Open water lay beyond the horizon, and beyond that still, his new life. In a few weeks, the Mary O’Connor would dock in Galway Bay, and from there he’d head for the small village his parents had spoken of with such love. He felt a stirring of emotion, the first spark of excitement since—
Deliberately he cut off the thought. He was no longer a soldier. There would be no more Rebel yells, no more guns, no more battles. He was no longer Captain Callaghan, so-called hero of the Irish Brigade.
He was just plain Cavan Callaghan, an Irishman searching for peace.
What would Ireland be like? For as long as he could remember, he’d heard his parents speak wistfully of the country they’d left behind. The green fields and sea-swept coast. The heather-strewn countryside filled with wild strawberries and prickly gorse. They’d spoken of the people, too, but especially of his father’s brother.
The last of the Flynns now, except for himself.
His mother had said the village of Ballycashel lay some nine miles from Galway City. What would he find there? He knew about the Hunger, of course. Had any of his family survived?
Or would he find the same devastation he’d confronted on his return from the war?
A ripple of sound floating on the briny breeze told him he wasn’t alone. Recognizing the delicate notes of a penny whistle, he glanced around. One of his fellow passengers, obviously an Irishman, lowered the instrument from his lips and smiled, his foot tapping in jig time.
The piper began playing anew, and a raw slash of anguish ripped through Cavan’s gut. He knew the words well, and the tune the man played so effortlessly and with such emotion.
He’d prayed never to hear them again.
The minstrel boy to the war has gone,
In the ranks of death you’ll find him . . .
He squeezed his eyes shut, the ‘ranks of death’ marching through his memory.  So many friends,  his comrades-in-arms, who would never return . . .
His brother.
With a hard shake of his head, he strode away from the haunting melody.
He was going home. And there he would find peace.
There would be no more war.
Author Links:
Cynthia's blog:  http://cynwrites1.wordpress.com/
Cynthia's website: http://www.authorcynthiaowens.com
Cynthia on Facebook:  https://www.facebook.com/AuthorCynthiaOwens
Follow Cynthia on Twitter:  @Cynwrites1
Buy Links:
Amazon: http://www.amazon.com/Coming-Home-Cynthia-Owens/dp/0983396000/ref=sr_1_1?ie=UTF8&s=books&qid=1303209296&sr=1-1
Indigo: http://www.chapters.indigo.ca/books/Coming-Home-Cynthia-Owens/9780983396000-item.html?ikwid=cynthia+owens&ikwsec=Books 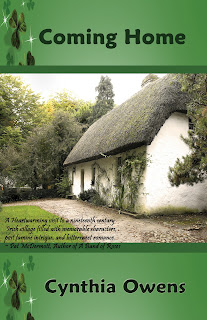