The making of Dark Deceit

January 18, 2012
Dark Deceit has come a long way since its inception.

The initial story began in south Wales, at Taffs Well train station, to be precise, in the autumn of 2003. As I waited for the train to Cardiff, the outline of a story set in medieval England and Normandy first struck me. Scribbling frantically into my notepad throughout many such waits, the story developed nicely. 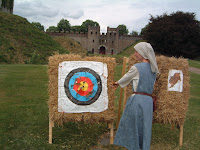 Of course it helped that I spent my weekends in the company of a well-travelled re-enactment group. Clad in a handmade (not by me, I must admit) shift and dress, leather shoes and belt, a pouch hanging from it, and hair covered by a plain wimple, I enjoyed explaining historical points to visitors. Learning to be an archer - easy peasy for a Sagittarian like me - and watching the others cook (yumm, roast pork!), bake (griddle cakes, anyone?), doing needlework (I'm useless!) and making braces (necessary for an archer) brought with it a sense of an experience of a different life. People really used to live like that. Well, ok, perhaps without the large quantities of cider we consumed during our nights spent inside castle grounds. Or perhaps...

During my two years in Wales, I took many opportunities to explore not just the stunning Welsh countryside, but also what used to be known as the 'Marches', the borderlands between Wales and England. Intrigued by the picturesque landscapes of Herefordshire and Gloucestershire, I knew where I had to base Dark Deceit. Bellac Manor is imaginary, but I saw many small hamlets, with small old churches and a cluster of cottages, and even market towns like Hay on Wye and Hereford to get a clear picture in my head.


In 2007, we went on holiday to Normandy, an utterly inspiring place for any historical novelist. We stayed in Argentan, to date still one of my favourite destinations. I have vowed to return! Visiting places like Falaise - home of William the Conqueror, Caen - sadly much reduced to rubble in WWII, Bayeux, and Mont St Michel provided me with much unexpected inspiration. We also took the car to Mortagne, the old home town of Geoffrey de Mortagne, my MMC. Local histories, stunning landscapes and fascinating real-life characters make these places perfect for a novel.

Over the years, the early chapters were critiqued, re-written during my Creative Writing studies, taken apart and re-assembled. Then, halfway through, I hit the brick wall. And no plotting, editing, research or looking at photos could revive it. It gathered dust for six years. One day, having completely edited Highland Arms for publication, I decided to give it a go again. The result was encouraging - ideas flowed, the storyline shifted, and suddenly Dark Deceit turns out to be the first in 'The Anarchy Trilogy'.

Dark Deceit tells the story of Geoffrey de Mortagne, under-sheriff of Gloucester and spy for the Empress Matilda. When he witnesses an attack on a knight, his life changes beyond his imagination. Originally meant to be a medieval mystery, I later changed Dark Deceit to a generic historical with mystery and romantic elements. As with Highland Arms, Dark Deceit does not fit into a specific box. Nope!

Blurb:
On his return from battle at Lincoln, Geoffrey de Mortagne, under-sheriff of Gloucester and spy for the Empress Matilda, assists a dying knight caught in an ambush. Promising to look after the welfare of the knight’s only daughter, Geoffrey stays at her manor while he investigates the murder. Keen to join the Empress on her progress through England, he is torn between his oath and his duty.

Left to defend her manor following her father’s death, Alleyne de Bellac at first accepts Geoffrey’s support. As she doesn’t trust the taciturn stranger, she asks Will d’Arques, an old friend, for help. But loyalties change. Her life in danger and her inheritance at stake, Alleyne must decide which man to trust.
Discover England and Normandy divided by a brutal civil war, where vows are broken as allegiances waver.

Dark Deceit is due out on 10th February 2012 from Crooked Cat Publishing. I'm counting down...