My Place - Kat Henry Doran with Mad Dog and the Archangel

January 15, 2012
I'm a busy bee today as I also have a fabulous visitor at My Place: Wild Rose Press author Kat Henry Doran! Her romance, Mad Dog and the Archangel is part of the Class of '85 series. Check out her fabulous setting!


Handing over to Kat:
Over the years I've had the honor to work at a number of occupations: operating room nurse, malpractice insurance investigator, forensic nurse examiner, victim advocate, wife and mother. Five years ago I became Nana for the first time and, believe me, it’s the best job ever!


Even if I sometimes wish they'd remain in the closet, the years I spent in the OR and labor floor, and later advocating for victims of sexual violence, contribute significantly to the voice of my writing. You don’t  spend thirty years playing loyal serving maid and mind reader to egotistical surgeons, then twelve years haunting police stations, Emergency Rooms, and criminal courts without developing an internal alarm system for covert misogyny, rampant apathy, and overwhelming bigotry.
I retired my stethoscope and speculum a few years ago but continue to advocate quietly for marginalized populations through Amnesty International and Doctors Without Borders.

Summerville, NY, a fictional city on the shores of Lake Ontario in western New York State is the location for Mad Dog and the Archangel, one of the last of the Class of ’85 reunion series to be released [January 12, 2012]. Summerville is based on a real life neighborhood of Rochester, called Corn Hill. It is old and lovely and interesting with twisty narrow cobblestone streets, ivy covered mansions, small enclosed parks, one of the oldest Catholic churches in Rochester.
The setting was the same for the Class of ’85 series, 24 in total. Several of the books feature real life locations on the cover “An Inn Decent Proposal” shows the [fictional] Summerville Inn but is in reality a huge old three story colonial mansion. “Star Power” features the famous two hundred year-old Charlotte-Genesee Lighthouse which still stands, overlooking the Lake and Ontario Beach Park.
I drive through Corn Hill every week and when I have time I love to “get lost”, giving me a reason to discover small isolated streets, some with only two or three brick cottages on them, and imagine placing a story there. Corn Hill is known for being a stop on the Underground Railroad and each July hosts a famous arts Festival which attracts hundreds of thousands of visitors and crafters alike from all over the country and Canada.
Blurb:
Rafael Archangeli returns home to Summerville to bury an old friend, collect his inheritance, and then return to the only life he knows—conning wealthy women out of their money. In Rafe's world, money not only equals success, it goes a long way to obliterate the stigma of his past.
Grace Dunavan, former nun turned community activist, gave up worldly goods a long time ago with no regrets. But she's never known a man with the raw appeal of the Scourge of Summerville: Rafael Archangeli.
Their first meeting is like an errant strike of lightning, fierce and stunning in intensity, and takes both by surprise. Has Grace turned Rafe into a changed man? Or is he using his inheritance to pull off the biggest scam of his life?

Excerpt:
Safety First.
A personal motto that served Grace Dunavan well for the past thirty-something years. She never picked up strange men. In fact, she rarely dated men, strange or otherwise. And wasn't she the first to preach the wisdom of obtaining a detailed history—family, medical and sexual before contemplating a walk on the wild side? With any man, including the brother of her best friend.
Especially one whose thick mop of jet colored hair, hooded black eyes and razor-sharp cheekbones, all of which held undeniable appeal for a good girl who always did what the nuns and her parents dictated. With a name like Archangeli he should be a protector, not a walking advertisement that proclaimed: I've Been There, Done That; Let Me Tell You All About It.
As he helped her into her coat, Grace heard Gaby murmur something about an attorney who was trying to track down Rafe. None of it made sense. What woman in her right mind could think straight when faced with a man who redefined potency?
It was a night of firsts for Grace: leaving a party with a man she'd never met before; admitting how and where she'd learned to drive; breaking the land speed record for contemplating her first one night stand.
Author Links:
Website:  www.Kathenry.com
Blog: www.wildwomanauthor.blogspot.com
Buy Links:
Kat Henry Doran on Amazon
Kat Henry Doran on The Wild Rose Press 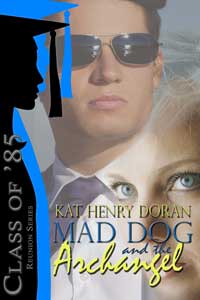