February 05, 2012
Please help me welcome mystery writer Carola Dunn to My Place. I do love a good English mystery, and hope you'll like the sound of Gone West, her latest release.

Over to you, Carola!

Hello, everyone. I'm the author of the Daisy Dalrymple series and the Cornish Mystery series, as well as over thirty Regencies. Almost all my books are set in England. That's where I was born and grew up, though I've lived in the US for a long time, presently in Eugene, Oregon.
All my books are historical. The Daisy mysteries are set in the 1920s, Regencies in the Regency (surprise! That's strictly speaking 1811 to 1820, when George III was mad and his son was Prince Regent), and the Cornish mysteries about 1970, which some people don't count as historical. To me, the time is as important to the setting of a book as the place.
My Place:
My latest book is GONE WEST, the twentieth in the Daisy Dalrymple series. I wanted to set it in an isolated farmhouse, and I decided to place my farmhouse in Derbyshire, a rugged county north of London but not too far north, so that Daisy could drive there in a day in her new car, a 1925 Gwynne Eight. Studying the map, I chose the Matlock district as being just what I needed. It's in the Derbyshire Dales, an area of steep, nearly treeless hills with narrow wooded valleys.
Eyrie Farm is up in the hills several miles from the small town, hidden in a shallow vale with a stream running through it. It's a Victorian house, built of local stone by farmers who wanted to get far away from the coal and mineral mines of the lower valleys. No electricity, just oil lamps and candles, and a coal-fired range for cooking, but Daisy's very relieved to find they have indoor plumbing!
I've been to Matlock and the Dales, but I'm not very familiar with  the area, so I started reading about Matlock and looking at pictures (thank you, Google!). As always when I study a place, whether in person or via the web, I found all sorts of fascinating information. Some of it fitted my planned story and some suggested new directions for the story.
The most interesting and useful discovery was Smedley's Hydropathic Hotel. The building dominates the town, so Daisy couldn't help noticing it. And lo and behold, there on the web was Smedley's visitors' handbook for the mid 1920s. I couldn't resist using some of the wonderful information, and the hydro ended up playing an important part in the story, though I hadn't ever heard of it when I began planning the book. 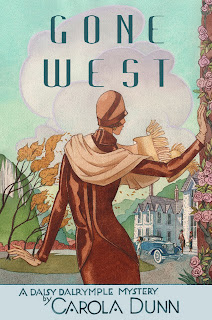