My Place - in Yorkshire with David W Robinson

March 04, 2012
This first Sunday in March sees not only winter returned after weeks of mild temperatures, but we also discover a new holiday destination (for a slightly warmer season): Filey in Yorkshire, England.

Let's head over to the seaside with David...

My name is David Robinson, and I’m the author of the Sanford 3rd Age Club Mysteries. I have a long and varied track record as a writer, turning out everything from short works of non-fiction to hardline psychological thrillers, sci-fi and horror, and all of them have an element of mystery
The Sanford 3rd Age Club Mysteries were a departure for me. I’ve never written traditional British cosy crimes before, but I’m a great aficionado of the whodunit. From Sherlock Holmes to Poirot and Miss Marple, I love a good mystery, and from a writer’s point of view, I enjoy the intellectual challenge of creating a complex yet airtight plot.
I’ve travelled extensively throughout the UK and wanted to draw upon that experience, so I needed an amateur detective who lived a life where lot of travel was possible. Who better than a 3rd ager. With no family ties, but others to take over the running of his business, Joe Murray and his mob of 3rd age rockers would be free to travel the country as they pleased, and if I gave Joe a home and business in the industrial heartland of West Yorkshire, it was for no other reason than I came from that same area.
Light-hearted in tone, there is no graphic sex, violence or bad language in the Sanford 3rd Age Club Mysteries, and despite the umbrella title, they are designed to tax the deductive skills of anyone of any age.

My Place:
Filey is the location for the first title in the series and it was chosen with great care.


Unlike so many of my novels where the area is unnamed or fictitious, Filey is a real English seaside town, nestling in its own bay on the Yorkshire coast, 7 miles south of Scarborough, 10 miles north of Bridlington.
It has a fine, sandy beach, and at the northern end, the waters are safe for swimming and splashing in the sea. On the northern boundary is the greed/red cliff known as Carr Naze. It drops off quickly, several hundred yards out to sea, and becomes a flat spar over which the waters can often be seen breaking. Filey Brigg. 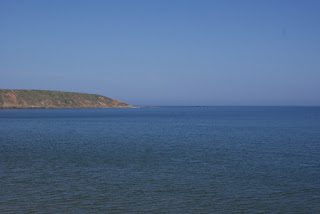 You can walk out on the Brigg at low tide, and take the views or study the sea life which gathers in the rock pools. A word of caution, however. It can be slippery and treacherous underfoot, so you need sensible walking shoes.
The Brigg acts as a natural breakwater which keeps the more vengeful power of the North Sea at bay, and there are times, on a still, summer’s day when the waters beneath Carr Naze are almost mirror-calm.
Although the Beachside Hotel as mention in The Filey Connection, is fictitious, many of the locations are real. The Three Tuns on Murray Street, for example, and the delightfully tended gardens around the bus station. 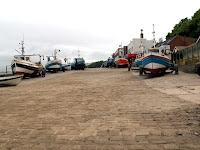 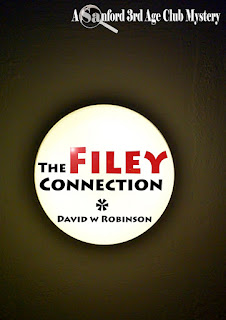