Author Barbara Edwards at My Place

April 01, 2012
Another sunny Sunday - a rarity in Scotland! With Easter just a week away, the daffodils in full bloom, the air crisp from cool nights despite the mild days, we emerge to enjoy time out again.

Let's go on a journey to Rhodes End with Barbara:

I’m Barbara Edwards and a native New Englander. I’m a graduate of the University of Hartford with a Master’s degree in Public Administration. I write poetry for myself and novels when I need to tell a longer tale. I’m fascinated by the past so naturally turned to writing historical romance. The dark paranormal stories evolve from nightmares. The romance comes from my belief in people’s basic goodness and longing for love.

I lived in Florida for several years and am past president of the Central Florida Romance Writers and a member of Romance Writers of America.
When I returned to Connecticut, I founded the Charter Oak Romance Writers, a Chapter of Romance Writers of America, along with several close friends.
My husband is a retired Police Sergeant. We share an interest Civil War re-enacting and travel the Eastern states to participate in events. I love visiting museums, galleries and battle sites, gathering information for my stories.
I taught Romance Writing at Manchester Community college for three years.
I’m fond of gardening and growing antique roses with limited success.
Most of my exercise is when my Belgian Shepherd, Dixie, demands a walk.
My Place:
This is a good time to introduce you to my favorite New England town. Rhodes End is located on a confluence of ley lines that draws magic and paranormal activity. Dog-legging the corners of Connecticut, Rhode Island and Massachusetts, it fails to appear on many maps due to various boundary and settlement disputes. This isn’t far from Hartford. Major highways to both Boston and New York City cut through the hills less than a mile away. It exists in my imagination and is the setting for my paranormal series: Finding Rhodes End, available from The Wild Rose Press. 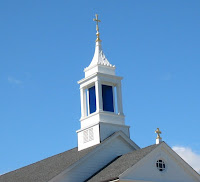 The Congregational and Catholic churches bracketing the old town green are typical of New England. A charming main street is lined with craft stores and boutiques for the occasional tourist’s enjoyment.
The normal exterior hides Rhodes End’s secrets. It is the confluence of ley lines, a hub of paranormal activity, magical or mythical power. As I revealed in Ancient Blood, werewolves live here.
The town draws people with paranormal powers and those powers are enhanced. Lily’s ability to see auras strengthens.
Since power also draws evil, villains are stronger. Mason, the villain in Ancient Awakening, wants immortality and gathers tainted items from every age and ancient culture to find their ultimate secrets.
Rhodes End has its happy side. Normal people live, work and play here without awareness of the psychic influence.
Weird things happen. Modern electronics are useless as cellphones fail and GPS can’t find an address.  The heroine in my next Rhodes End book, Rainie, keeps getting lost as the place rejects her. 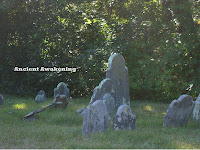 Here is a Short description from Ancient Awakening by Policewoman Mel Petersen:
This stretch of woodland and water along River Road was her favorite. Moonlight sent slivers of silver across the rippling water. A raccoon washed a bit of food from a perch on a fallen tree. The frost had emptied the footpath of joggers. “I’m near the North Bridge and heading back through the center. The moon’s barely risen, but the starlight’s so bright I can see frost along the riverbanks. I expect to hear a wolf howling.”
The Chief of Police has no paranormal ability but:
He had a lot of experience keeping things under wraps. Certain things happening in Rhodes End never became public knowledge. Some people made it their business to keep it that way.
The location for the next murder sounds so normal:
Old houses lined the walks like dowagers settled in for a cozy chat. The grass was brown and leaves were piled high in the corners. In a few hours children would be passing on their way to elementary school.
I’d love to have you Find Rhodes End and have tea with me on a sunny afternoon.
Blurb:
In Ancient Awakening, Police Officer ‘Mel’ Petersen investigates a death only she believes is murder. By disobeying direct orders from the Rhodes End Chief, she risks her career to follow clues that twist in circles to her backyard and lead the killer to her.
Her neighbor Stephen Zoriak is a prime suspect. Steve worked for a major pharmaceutical company where he discovered a weapon so dangerous he destroys the research. He is exposed to the dangerous organism. He suspects he is the killer and agrees to help her find the truth.
In the course of their investigation Mel and Steve find the real killer and a love that defies death.
Excerpt:
Legend gave him many names, but the wide halls of his mountain retreat no longer echoed with countless worshipers. He could have ruled the world had his ambition not died with the passage of time. The endless whispers were from the cold winds and the few praying priests. He didn’t care that he couldn’t remember his real name or birthplace.
For an eon he’d regretted the loss of softer emotions. Love had been the first feeling to die, along with the woman who had insisted he would never harm her. He couldn’t recall her features just the merry tinkle of her laughter and the bright smile she had greeted him with every morning. He licked his lips. She’d tasted sweet.
Fierce need flared in his gut and he sniffed the air. Outside his chamber a single acolyte in long brown robes waited to escort him. His mouth curved with a mirthless smile. The silent servants had ignited the flickering wall torches. Shadows jumped and shivered in the drafty halls like nervous virgins.
Author Links:
Please visit my Website: http://www.barbaraedwards.net
Blog Site: http://barbaraedwardscomments.wordpress.com
Facebook: http://facebook.com/BarbaraEdwards.Author
Ancient Blood http://on.fb.me/naHRY5
Twitter: http://twitter.com/barb_ed
Amazon author Page: http://www.amazon.com/author/barbaraedwards
Email: author@barbaraedwards.net
Buy Links:
Buy hyperlink Ancient Awakening: http://www.wildrosepress.us/maincatalog/index.php?main_page=product_info&cPath=177_136&products_id=4511
Kindle: http://www.amazon.com/dp/B002TG4NFG
Buy hyperlink Ancient Blood: http://www.wildrosepress.us/maincatalog/index.php?main_page=product_info&cPath=177_136&products_id=4511
Kindle: http://www.amazon.com/Ancient-Blood-Finding-Rhodes-ebook/dp/B0052NUR12/ 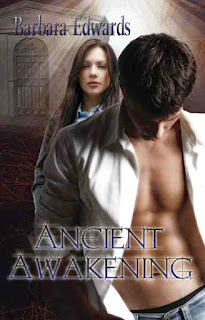