April 20, 2012
Today, I want to share an incredible building in one of my favourite towns: La Tour Marguerite in Argentan. 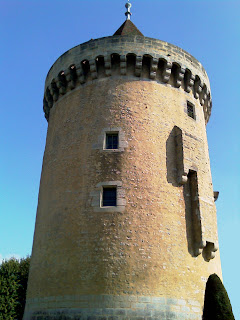 Back in October 2007 (that long ago, sob!), hubby and I took the car to Normandy, France, and stayed in a farm B&B on the outskirts of the pretty, old market town of Argentan. It was one of our best ever breaks, full of touristy stuff, historical visits, relaxation, walks, good food and friendly people. You can find photos of our trip on Flickr.

Argentan is first noted officially in the 11th century, and it was an important town during the day of the early Norman dukes, then the Plantagenents, and later the French. Not far from Falaise (William the Conqueror's home town), it played a strategic role. Eleanor of Aquitaine stayed for a while and talks were held here to reconcile Henry II with Thomas Becket.

Argentan is full of historic buildings - churches, houses, a donjon. Folk were very friendly, especially as we spoke in broken French rather than English. When in Rome, erm, France...

La Tour Marguerite (Margaret's Tower), one of 20 turrets built into an impressive town wall over several centuries, dates back to the 14th century (although some sources place it into the 12th century). Originally called Grosse Tour (Big Tower), it's not until the 17th century that the name Marguerite is linked to it. Historians mull over two options: One is Marguerite de Lorraine, founder of a nunnery at Argentan, the other a young orphan who was apparently imprisoned here by her evil uncle. Plenty of inspiration for a historical novel, don't you think? If your French is up to scratch, you can see the details here.

Sadly, we couldn't go in (it's closed Sept-May) but I was fascinated by this building.

During our visit, I collected not only useful local leaflets, but also a fascinating history book, La Normandie des ducs aux rois Xe-XIIe siècle. Although I'm not fluent in French, I can make out fascinating tidbits.

As a medievalist, I wanted to see how Normandy was before it was torn to pieces in WWII, and fortunately, there are many remains across Normandy still here today. From our base in Argentan, we travelled to Falaise, Bayeux, Caen, Mont St Michel, passing picturesque villages too numerous to stop. We also stopped off at Mortagne-au-Perche which I'd already chosen as a home town for my fictional character, the under-sheriff Geoffrey de Mortagne from Dark Deceit. Talk about combining research with touring. Fun! Sadly, we missed out on Rouen due to car problems, so that's one place to visit next time.

Normandy is a beautiful and fascinating county with loads of history, nature and delicious food and drink (proper cider, anyone?). I could easily live there, but I would have to brush up on my French for that.