Today, Rose McClelland celebrates the release of her novel, The Break-Up Test, from Crooked Cat Publishing. At her home in Belfast, Rose is busy writing novels, alongside reviewing books for Judging Covers. A theatre play she wrote has also been shown in a production at a theatre in Belfast.

So, to find out more about her, I've asked her some questions. Here she goes....

1) Tell us about The Break-Up Test! What inspired you to write this story?

I was having one of those hour long conversations with my sister one night.  I was telling her that I had a set of mid-year resolutions which I had devised to massively cheer myself up. After I listed them off, she said, "that sounds like a book to me". And I said, "Oh yeah, so it does".  So I decided to go off and write it. It was a fun journey to take with the characters.

2) How did you get into fiction writing?

I attended a creative writing course when I lived in London. I attempted a novel but alas, it lived in my bottom drawer and refused to come to play (I think it was a bit scared).  Later, when living in Brighton, I came across 'The Artists Way' by Julia Cameron.  I started a 12 week course to 'unblock creativity'.  By week eight I had started my first novel and couldn't stop.  I am now on book number four.

3) Are you working on another novel at the moment? If so, what is it about?

Yes, I am writing a novel which is set in the theatre world. It's about all the sizzling chemistry that goes on behind the scenes and I love writing it!

Blurb for The Break-Up Test:

Meet Amy, Beth and Sarah. All intelligent women with one thing in common – a bad taste in men!
Amy receives seductive texts from Gav and promptly skips round to his house for a mid-afternoon romp. She never planned it that way. Maybe one day he’ll actually fall in love with her?
Beth sits at her desk, her mobile phone propped up in front of her keyboard. Anytime soon it’ll light up like the Blackpool Illuminations, and Karl will finally get in touch about that drink. It’s been five days…
Sarah is seeing Stephen, trying to believe his claim that although he shares a bed with his ex, Kat, they aren’t sleeping together. She can’t believe it’s turned into one of THOSE stories you read about in women’s weeklies.
Then Jamie comes along with his Break-Up Test and turns their lives upside down.
Will Gav, Karl and Stephen suddenly sniff the competition and clean up their acts?
And what exactly is in it for Jamie? 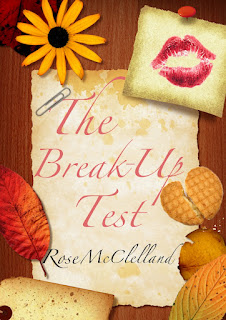