Jacquie Rogers at My Place

April 22, 2012
It's time to welcome another fantastic author to My Place. Please say 'hi' to the lovely Jacquie Rogers.

Handing over to Jacquie: 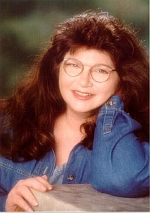 I'm a former software designer, campaign manager, deli clerk, and cow milker, but always a bookworm. Reading is my passion--westerns, fantasies, historicals of any era, and all with a dash of romance. If an author can make me laugh, I'll buy every book he/she ever wrote.

While I'm a country girl by birth, I currently live in suburbia with my very patient husband (important point: we are the staff of one cat) I don't think you can ever take the country out of a girl's heart. That's probably why my stories often take place in Idaho where I grew up. (Hearts of Owyhee series and some of my short stories, too.)

I’d love to introduce you to God’s Country today.  I’ve since found out that many places on this planet are truly marvelous, but as a chilld, I was told and firmly believed that there was no better place on earth than Owyhee County, Idaho.  A dozen years later, it occurred to me that of 7 billion people, only 7,000 lived there.  Hmmm, maybe other places were better—maybe Owyhee County isn’t God’s Country after all.


So I moved to the big city.  And since then, I’ve written about Owyhee County.  Weird how that works. 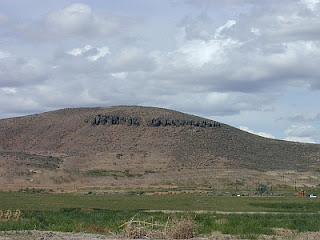 Owyhee County is in the southwest corner of Idaho, bordered to the north by the Snake River, the west by Malheur County, Oregon, and to the south by Nevada. We’ll start in the north of the county where our family farm was.  Here’s a photo of where we used to play—Graveyard Point.  The basalt outcroppings that adorn the top are each about 50’ tall.  This hill is in the foothills of the Owyhee Mountains, and our farm was in the valley right behind the camera. 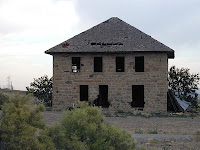 Once we got a little older and more interested in parties and the opposite sex, Jump Creek Canyon became part of our world.  I have a scene set here (yes, the love scene) in my next release, MUCH ADO ABOUT MAVERICKS.  That book is set in Henderson Flats, which is now Marsing, Idaho.  And near there is the Poison Creek Stage Stop, also in that same book.  (Um, but no book cover yet.)  About 10 miles to the east and across the Snake River is Lizard Butte, and extinct volcano that eroded away to the shape of a lizard.  Kinda cool looking. :) 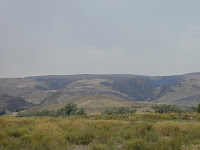 Farther south is the county seat, Murphy (population: 97, but I don’t know where they found those 97—I’ve never seen that many people there!) and not far from there is a really cool little place called Oreana, where MUCH ADO ABOUT MARSHALS is set.  There’s the coolest old stone church there, Our Lady Queen of Heaven Catholic Church. But it’s actually a new church, built in the 1960s.  Before that, it was a general store, and that store is what sparked my imagination for Gardner’s Mercantile, the store that my heroine’s family owns. 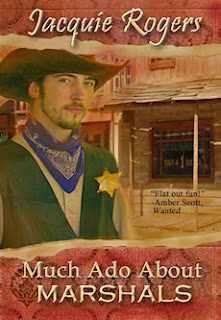 Laugh out loud funny plus plotting so clever and seamless makes Much Ado About Marshals my favorite new recommended read.
~~Amber Scott, author of FIERCE DAWN
Daisy Gardner wants to be a detective just like dime novel heroine Honey Beaulieu.  To her delight, her sister shot a bank robbery and he got away, so now she even has a crime to solve. But her parents insist she marry a man whose farm is miles from town.  She can't solve crimes stuck out there. What better solution than to marry the new marshal!
Rancher Cole Richards saves his friend from robbing a bank, but is shot for his efforts, and now is a wanted man.  His friend takes him to Oreana to see the doc, where Cole's mistaken for the new marshal.  Now he faces a dilemma few men have to face--tell the truth and hang, or live a lie and end up married. Either way could cost him his freedom.

Excerpt:
Copyright © 2011 Jacquie Rogers
Oreana, Idaho
"Yes, he's definitely the one." Her sweet tone belied her accusation. Most robbery victims wouldn't be so cheerful. Was he in jail? The aroma of sagebrush and alkali had been replaced by tincture of iodine, so he could be in the doctor's office.
"Fits the description exactly."
Cole's hopes sank at the lady's certainty. While he'd never had a doubt he and Bosco would be caught, he'd hoped to make it back to the ranch to set things right. And the lady didn't have to sound so damned happy about it.
"You're sure about that?" a man's voice asked.
"Well, Doc, he's tall, so he matches the six-foot-two height, he has dark brown hair, brown eyes, and he's wounded on the right leg just like the wire said."
Cole hoped that at least Bosco had made it to the ranch. He was goodhearted, a loyal friend, but not all that quick on the draw.
"Yes," the lady continued, "he's our new marshal, all right."
New marshal? Hell, he was wanted for bank robbery! This didn't seem exactly the right time to mention it, though.
"Good," the man named Doc responded, "then I'll bill the city for his care. The wife will be happy to hear I finally have a cash customer."
"You don't have a wife."
The doctor chuckled. "No, Miss Daisy, but I'd sure like you to change that." "Not a chance," she teased.
They both laughed, but Cole knew how the doctor really felt. Some men were born to be alone.
A cool cloth smelling of borax mopped his forehead. He forced his eyes to open. He blinked a couple of times and focused on a beautiful woman, her brow wrinkled with concern. "Come here, Doc," she said with quiet enthusiasm. "He's awake."
Cole heard water pouring as he stared at the lady who belonged to the sunny voice. Her green-eyed gaze bathed him with compassion and reminded him of sunset on Sinker Creek, where the rays glanced off the rapids, and the rippling of the water made a man's heart feel pure.
He wondered what she'd look like if he loosened her auburn hair that was pulled tightly into a bun. She was a beauty, all right.
A slight man dressed appropriately for a doctor, or an undertaker, rubbed his brown handlebar mustache while he mulled over Cole's condition. "His color's much better, Daisy, don't you think?"
"I'll go tell Dad that he won't have to rush over here for the marshal's last prayers." She pulled on her gloves and tossed a cloak over her shoulders.
Damn, a preacher's daughter. What a waste of womanly flesh.
"Look for him at your Aunt Grace's house," the doctor advised. "When I picked up the wire telling us the new marshal was riding in, Rayburn told me that your sister had just come home. Seems like some yahoos tried to hold up her bank--put quite a scare into her, too."
Daisy clapped her gloved hands to her cheeks. "Oh, no! Is Iris all right?"
"She's fine," replied the doctor, "but I hear one of the would-be robbers is somewhat worse for the wear. She claims she shot one."
"Oh, my!" Daisy picked up her parasol and reticule. "I'll get over there right away. She may need me!"
Cole's throat tightened as Daisy hurried to the door. She'd put two and two together as soon as she talked to her sister.
"God works in wonderful ways," she exclaimed triumphantly as she unlatched the door. "It's a miracle that our new marshal showed up when he did." She swept out of the room like a queen.
Stay calm and think. So Daisy's sister was the woman who'd shot him. What lousy luck. He had to get the hell out of here.
Especially since Miss Daisy thought he was the town's new marshal.
He didn't even know what town. 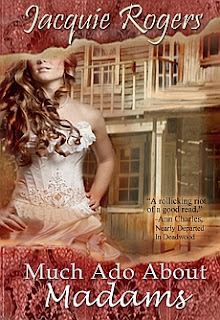