April 15, 2012
On this sunny but chilly spring Sunday, I welcome another fabulous multi-published author to My Place: Lyndi Alexander. Welcome!

Without further ado, I'm handing over to Lyndi:

Lyndi Alexander dreamed for many years of being a spaceship captain, but settled instead for inspired excursions to fictional places with fascinating companions from her imagination that  she likes to share with others. She has been a published writer for over thirty years, including seven years as a reporter and editor at a newspaper in Homestead, Florida. Her list of publications is eclectic, from science fiction to romance to horror, from tech reporting to television reviews.  Lyndi is married to an absent-minded computer geek. Together, they have a dozen computers, seven children and a full house in northwestern  Pennsylvania.


When I came up with my urban fantasy idea to have elves interacting with the modern world, a big city just wouldn’t do. Maybe it was my reading habits growing up, but I felt that elves belonged in the forests, like those of Tolkien’s Lothlorien. How appropriate, then, that my modern elves live in the deep forests outside the city of Missoula, Montana. 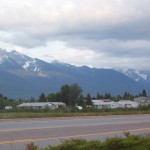 I lived here back in the late 1970s, when my first daughter was born, and I found the vistas beautiful on every side, no matter which one you choose. The setting here is one of beautiful summer greenery, Douglas fir and other pines on the slopes, and also austere frozen vistas in the winter. Wildlife is abundant among these trees, and the ecosystem there helps water and care for many of the populated areas in the surrounding valleys. When my heroine, Jelani Marsh, discovers she has the gift to help stimulate growth of the natural plants and trees around her because of her half-elven heritage, she actually comes to make the world a better place, even for the humans who unknowingly co-exist with the elf clan of the Bitterroot. 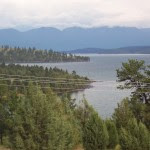 Other landmarks that figure broadly in the stories include Flathead Lake, which is the largest freshwater, inland lake within the United States, and runs very deep, deeper even than the Persian Gulf. These waters feed and nurture the clan as well as the rest of the ecosystem, in addition to being a beautiful reminder of the power of nature.

The series is now on book four, called THE ELF GUARDIAN, which will move a little further north into the area of Glacier National Park and Glacier Lake.

Said to have special effects on the human body and psyche, an area of earth energy, The Montana Vortex, in Columbia Falls, just west of Glacier, will figure greatly in book four as well. http://www.montanavortex.com/  Like Sedona, Arizona, this is touted as a mysterious place where people may interact with the invisible energies of the earth to strengthen their inner beings. Who knows what will happen when elves tap into those mysterious energies, too? Or when a paranormal investigator threatens to debunk them?

Lyndi's latest book in the Clan Elves of the Bitterroot series is THE ELF MAGE.

Blurb:
Daven Talvi made a choice a quarter-century ago to serve the Bitterroot Elf Clan, allowing the Circle of Elders to send him into suspended animation until the queen could be rescued. In doing so, he gave up his mate and his newborn son, sacrificing his own life for that of the clan. It had been a mistake. With the clan now in chaos and the young queen in hiding, Daven must acknowledge his own errors and take responsibility to set things right.
He teams up with Lane Donatelli, a human who has too long used food and computer gaming to feed his own insecurities. Together, they use Lane's beloved technology with Daven's innate magical abilities to wage battle against the evil elf mages threatening the clan.

Excerpt from The Elf Child:
“Lane!” A delighted squeal and a pair of arms pulling him upright told him exactly where he could find Jelani.
He swallowed any protest he was about to make. “Hey, Jelly Bean!”
“What are you doing here? I didn’t know you were coming!”  She slipped her arm through his. “Come on, let’s go back to the house. It’s cold out here in the woods! I’m so glad you came.” She leaned close to whisper, “Did you bring me coffee?”
“You wanted coffee?” he asked, plugging an innocent note into his words.
“You forgot!” Her resulting pout was a familiar sight, and one that reassured him that she hadn’t changed too much in her time away. He grinned.
“Of course I didn’t.” He patted his case. “Brought you a whole thermos, brewed and ready to go.”
“Lane, you’re the best! How’s Crispy?”
“Seems good. He said he’s been out here often. Have you seen him?”
“A couple of times, when Daven’s brought him by.” She looked at him, nose wrinkled in consternation. “But it’s a big forest, you know. Acres and acres of vegetation.”
Her answer ratcheted up his grumpy attitude. “Right. And what is it you do out here again? Hug trees all day?”
“Make them grow.” Her smile became something quite contented as she reached out a hand to pat the trunk of a sapling on the edge of the path. “Like what I used to do for your plants at the apartment? Somehow they listen to me, do what I ask them to do. Like this, look!”
She dragged him aside to a small area where huge trees had been snapped in half by the wind and snow, decapitated upper branches lying on the ground like a child’s pick-up sticks game.
“You break all the trees?”
“No, stupid. A lightning strike got them.” She punched him in the left arm. “Look closer.”
Lane surveyed the area, about the size of half a city block, and after a moment noticed that between the fallen trees, a myriad of young trees had pushed up through the snow, perhaps a foot to eighteen inches tall. Extrapolating that a few years out, the little glade would repopulate itself in fine form.
“You did that?”
“Yep.” Her face glowed with pride. Lane couldn’t remember seeing her look so happy in all the time he’d known her. “Come on!”
She dragged him, stumbling, through the snow, that seemed to get deeper as they went into the wood. At that point, all the trees looked the same to him, and he was glad she’d found him. He’d never have been able to pick the right one on his own. It wasn’t like it had windows and sat thirty feet across at the base. Or a mailbox. Or hell, even a welcome mat.
She stopped suddenly and reached out to one of the tree trunks, placing her fingers on it. With a crack and a creak, the trunk slowly opened. He closed his eyes, still reluctant to believe this bit of magic, and she pulled him inside the two bedroom cottage—inside the tree.
“It won’t collapse,” she said, in the same tone he usually used for Crispy, that tone that meant, ‘I’ve told you this a thousand times already.’
“I don’t believe you,” he said, as he always did when she reassured him. He just had to find some way to turn off his mind. Then he could believe any silly crap that the elves wanted to feed him. People inside trees? Sure. Houses in trees? Sure. Flying dragons? Whatever…

Links:
Buy links and discounts here at Dragonfly Publishing: http://www.dragonflypubs.com/dfp/elfmage.html  or for your Amazon Kindle here http://www.amazon.com/dp/B0075HH72A/dragonflyzone-20
Learn more at http://clanelvesofthebitteroot.com and http://lyndialexander.wordpress.com 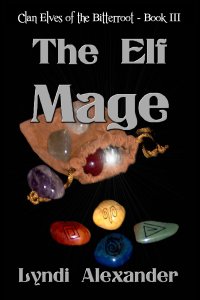