Today, I welcome non-fiction author Jo Sparkes, whose new book should be a must-read for emerging writers as well as reviewers:

Feedback:   How to Give It   How to Get It
A Writer's Guide to Spinning Gold

As I've been recommending new writer friends at CCP to look for critique partners or groups, Jo has offered to elaborate on this particular subject as part of her blog tour. So, handing over to Jo...

"Constructive Criticism - How to do it right!"

Hello everyone. Cathie, thank you so much for having me here today.

The very first step in any criticism is to ask yourself should you? Will it do any good for the person? Is this a book the writer asked you to read, that he wants your opinion? Is this an employee, a child, a student in your classroom? Or is this someone you think has made a mistake – someone you don't particularly like – and you can't resist getting in a little dig?

Make sure it is something you should be doing before doing it. 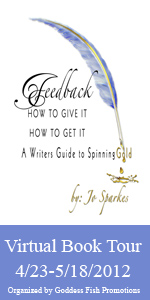 Assuming it is, your first step is to identify the problem to be solved. You've been thirty minutes late to work twice this week, or your book takes a hundred pages before we meet your heroine. Your teacher tells me you skipped a big test yesterday.

Always use facts, not emotions. If you tell an employee he's always late, he may well insist that's not true. He perceives that he is right, not you. But telling him he's been thirty minutes late twice this week is a fact. He can argue why, but he can't dispute that it happened.

Second, having presented the problem, allow the other person to solve it. Don't stomp in with your own solution. Listen to the person sitting across the table. There may be factors you know nothing about.

If this is an employee or child or such, the goal is to find a solution and get an agreement – or 'buy in' –  from the other person.

If it's art, such as writing, the same process still applies. Saying, “I don't like your character.” really says nothing. What about the character needs to be addressed? Give the writer facts.

You can find those facts by asking yourself why. Why don't you like the character? Why did you have a hard time reading the third chapter? Those are things the writer can understand and do something about. It's perfectly okay to say, “when it turned out the butler did it, I honestly thought there was something wrong. I mean, why would he do it?”

That sort of statement is something the writer can grab hold of and address. Maybe the story was changed in the rewrite, and the motive was omitted by accident.

The writer needs to understand from the reader perspective – but does not necessarily need your solving the problems for her. A flurry of “I think it ought to be the stepdaughter!” reasoning will probably be met with a brick wall, unless you are the editor. Let the writer solve the problem – you just let her know what the problem is.

Last, let the other person know about the good stuff he/she is doing as well. “Sharon, you're the best analyst we've got. But this late stuff is something my boss noticed.”

The idea here is to put it in perspective. Let the other person see all the great things he's doing right. Otherwise he may not be aware of them.

The same is true for the writer. “I was riveted by the chase through the Vatican underground! I kept reading after midnight, even though I had to go to work the next day.” Writers have a tendency to focus on the negative – it's nice to be told of the good stuff from time to time.

Please be sincere and accurate with the compliments. If you can't think of anything good to say, leave this step out. Somehow insincere compliments always sound insincere.

Feedback: How To Give It, How To Get It
by Jo Sparkes

Feedback … a kinder word for criticism, is an organic component to life.

When a toddler learns to walk, he falls. He screams, cries – and persists. What would happen to the human race if he gave up after a few bumps?

Here, at last, is a simple process for getting the most from all the feedback the world offers us.

Excerpt:
That toddler learning to walk is a great example to us all.

The child has no fear of failure, no concern over how foolish he may look to others. He never pauses to consider if it's worth the effort. And he pays no attention to anyone pointing out that seventy percent of his peers can already walk.

He wants it. He keeps trying until he gets it.

Somewhere along the path of life, we come to perceive mistakes as 'bad'. We're told 'don't make them; avoid them.' You don't get called in to account for yourself if you don't make a mistake. Some people actually avoid mistakes by not doing anything at all.

That's the reality. The only way not to make a mistake is not to do anything. Which means no real achievement, no real success.

I spoke to a friend who had achieved a very great deal – he'd made a huge amount of money as an entrepreneur. He was the type of person most would call wildly successful.

Yet it turns out that before he made money, he had lost money. He'd lost enough that those same people labeling him wildly successful now would term him an abject failure. It cost him two businesses.
But he believes if he hadn't made that mistake, he would have never found the key to success.

AUTHOR Bio and Links:
A well-known Century City Producer once said that Jo Sparkes "writes some of the best dialogue I’ve read." Not only are those words a compliment to Jo’s skills as a writer,but a true reflection of her commitment to her work.

Taking every class she could find, she had the good fortune to study with Robert Powell; a student of renowned writers and teachers Lew Hunter, and Richard Walter, head and heart of UCLA’s Screenwriting Program.

The culmination of those years was the short-film "The Image", which she wrote and produced single-handedly. And in so doing, she became fascinated with the dynamics of collaboration on a project. 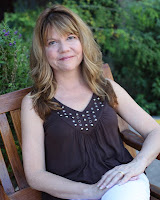 Since then, Jo hasn’t looked back. Her body of work includes scripts for Children’s live-action and animated television programs, a direct to video Children’s DVD, television commercials and corporate videos. She's been a feature writer on ReZoom.com and a contributing writer for the Arizona Sports Fans Network; where she was called their most popular writer, known for her humorous articles, player interviews and game coverage. Jo was unofficially the first to interview Emmitt Smith when he arrived in Arizona to play for the Cardinals.

She has adjunct taught at the Film School at Scottsdale Community College, has teamed with a Producer on a low budget thriller, and a Director on a New Dramady. She went in front of the camera for a video, “Stepping Above Criticism”, capturing a popular talk with her students.

Her new book, FEEDBACK:  HOW TO GIVE IT  HOW TO GET IT, shares her lessons learned with writers, and indeed everyone dealing with life's criticism.

When not diligently perfecting her craft, Jo can be found exploring her new home of Portland, Oregon, along with her husband Ian, and their dog Oscar.
http://www.feedbackthebook.com
http://josparkes.com/
~~~~~~~~~~~~~

“In her compact, wisdom-charged Feedback Jo Sparkes provides sharp, sharp, cogent, advice not only for writers but for all people who value creativity and seek to lead fulfilled, creative lives.
“This slender volume provides more bang for the buck than far longer, weightier tomes. It is a splendid resource to which writers will refer repeatedly.”
- Richard Walter  Chairman of Screenwriting, U.C.L.A.
“The lessons contained in “Feedback” are not for the writer who is merely looking for a compliment, but rather for those who are striving for accomplishment.”
Jo Sparks simplifies the feedback process in this concise easy to implement guide to giving and receiving feedback.  As an actress, I believe everyone can benefit from her experience, not just those in the industry.
~~~~~~~~~~~~~

Jo will be giving away a $50 Amazon.com gift certificate to one randomly drawn commenter during her tour, so feel free to follow her and make sure you leave a comment. :-) 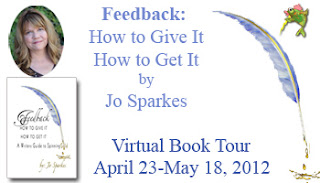