June 03, 2012
Today at My Place, I'm introducing the setting of my upcoming release: Cornwall!

I recently completed a historical romance novella, this time in the Victorian era. As I couldn't get through the edits in time for the deadline of the call for submission I wrote it for, I'm now going to publish Silent Deception independently.

I haven't completed all edits, and hubby's still busy finalising the cover. But... I have a blurb and an excerpt! ;-)

Cornwall is the south-western tip of England. Full of history, dramatic countryside and adventure, it forms the perfect backdrop for a romantic suspense set in Victorian times. Maybe even more than one... 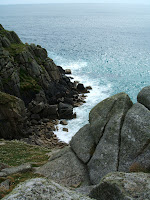 Trekellis, the fictional village and manor in Silent Deception, is set on the coast to the far south-west. I didn't have a specific place in mind this time, as I haven't visited Cornwall (yet) - the first location I wrote about that I haven't been to. Reason to rectify that omission and plan a holiday, methinks.


Trekellis Manor sits atop a steep cliff - the scene of a murder? Sweeping views over the sea from the house make the manor a fascinating place. That, and the locals' firm belief that it's haunted by the ghost of the last owner who shot himself nearly half a century before...

The grounds are overgrown, untended for decades; the manor's interior covered in dust and cobwebs. But none of that disturbs heiress Minnie as much as the whispers she keeps hearing. A male voice. 'Hettie...'

Still, Minnie is determined to uncover the past and restore Trekellis Manor to its former glory. But she needs help.


Having inherited a family estate she’d never heard of, Minerva Goodridge travels to Cornwall to take charge of her new home. But fatal memories lurk in the shadows of Trekellis Manor. As the locals keep away from the house, Minnie accepts the help of a stranger. Can she trust him?

Gideon Drake, 8th earl of Rothdale, is on a mission to uncover a family secret linked to Trekellis Manor. But the arrival of Minerva, the new owner, disrupts his investigation. Attracted to the headstrong heiress, he decides to take action - and ends up uncovering more than he expected.
Gideon must weigh up his family’s reputation against Minnie’s, but will the revelations tear them apart?


Minnie couldn’t tear her gaze away, entranced by the Gothic turrets flanking the entrance to the drive. As the cart rattled between them, a shudder ran down her spine. The three-storey buildings stood forbidding, the tiny windows covered in dirt and dust, rusty locks and chains on the narrow doors.
Hedges grew tall against the walls, with ivy covering nearly half the buildings, clearly left to grow unchecked. The lawn, no, what obviously used to be a lawn, lay overgrown, with wildflowers and weeds bursting through any gaps they found. Moss covered the gravel track beneath the wheels of the cart.
She looked ahead and held her breath. The manor loomed proud, with double doors in the center of the wing marking the main entrance.
The cart ground to a halt just outside the steps leading to the doors. The solid mahogany faded, cracks split the old wood. A sense of sadness washed over her. Why were people–Father one of them–so superstitious? Not once had he mentioned Trekellis Manor in her presence; even when she nursed him during his long illness.
“Here, miss. Let me help you.” Mr Drake held out his hand.
As she rose, the horses lurched forward. Minnie lost her balance, her arms flailing through the air. She toppled sideways, certain she’d land unceremoniously on the ground. Suddenly, strong hands encircled her middle and instead of lying on her face, she was pulled against a lean, hard body. Her face inches from his, she stared up, his dark eyes unfathomable.
Unable to pull her gaze–or her body–away from the man, her heart pounding in her ears, she swallowed hard. “Ups-a-daisy.”
A smile curved his well-formed lips. “Indeed.” He raised an eyebrow, not relinquishing his hold. “Are you quite all right, Miss Goodridge?”

Silent Deception will be available on Amazon from mid-June!