Manchester often gets a bad rap; London definitely gets the lion's share of attention, but even the BBC has moved most of its production offices to Manchester. Most people associate Manchester with music, and for good reason: "Madchester" gave rise to Tony Wilson's Factory Records which brought us Joy Division, New Order, Happy Mondays, and Orchestral Manoeuvres in the Dark. It's the home of my favourite band, The Fall, who often graced Wilson's club The Hacienda. "We do things differently here," Wilson said about his town, and Mancunians are proud to agree. 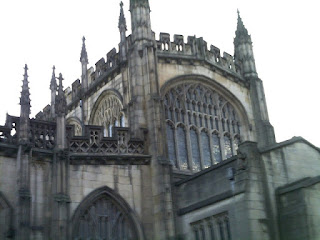 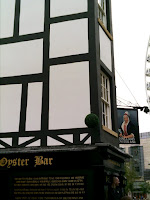 Manchester is home to one of the epic football rivalries, between Manchester United and Manchester City. Man U are the big corporate team and probably have the most fans and the most haters worldwide. Man City, however, were the big winners of this year's English Premier League, so hurrah! I like to think my story helped. ;-) I made a book trailer to celebrate the victory [see below].


It's a friendly city with plenty of that cheeky northern humour. Visit the museums, the cathedral, or Chinatown, but don't forget the music clubs. Your favourite new band may be waiting there. 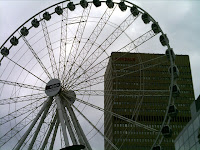 Footie brought two best friends together; no matter that one was Shai's ex and the other her current boyfriend.

When she flirts with Stuart on the bus ride home, Shai begins to formulate an idea to make match night more rewarding for all three of them.

A long moment later, Joe chuckled as he rested his hot face on her back, panting from his exertions.
"What brought that on?" Joe finally asked at last, straightening to refasten his trousers. "More tabloid stories about Johnny Depp?"
Shai blushed as she picked up her clothing but decided not to dress, enjoying the kitchen's warmth. Her skin still tingled.
"Oh, I blame Georgie," she quickly lied. "She was texting me all about the plans for her dirty weekend and I guess it just got me all hot and bothered. And there was this guy on the bus reading a dirty book in the seat in front of me, sporting a semi."
Better to be as truthful as possible.
Joe leaned over for a kiss before walking back to the chopping board. He put his apron back on and resumed his task—salsa for tonight’s match. "Maybe we need a dirty weekend. Fancy going up to Blackpool?" he asked.