June 17, 2012
Today, I welcome author Mark Patton to My Place. Mark's historical novel, Undreamed Shores, is a fascinating tale of discovery and adventure.

Handing over to Mark...


I’m Mark Patton, and I write historical fiction set in early periods. I was born in Jersey, studied archaeology & anthropology at Cambridge, and have since gone on to teach the subjects at several universities in the UK and continental Europe. I have published several non-fiction books on aspects of European prehistory, and my first novel, Undreamed Shores, is set in around 2400 BC, the period which saw the building of Stonehenge, and the appearance of the first metal objects in the British Isles. The novel is an epic journey narrative, taking in Southern England (Dorset, Wiltshire), the Channel Islands (Alderney, Guernsey, Jersey) and Northern France. It draws not only on my understanding of the archaeology, but also on my intimacy with the landscapes and seascapes, based on many years of walking and bird-watching, swimming, sailing and scuba-diving.

My Place:
Swept off course by the tides, and washed up on the shores of a land unknown to his people, my protagonist, Amzai, has to make sense of an alien land and culture. He is rescued and cared for by a young woman, Nanti, who teaches him her language, and with whom he walks inland to the settlement where her father lives. I call it Wiko-Elawar, but it appears on modern maps as Durrington Walls.

Bisected by the A345, it is a difficult site to appreciate nowadays, not least because the road cuts most of it off from the River Avon, probably the main reason why it is where it is. The easiest way to find it is to follow signs to Woodhenge (the “Shrine of Sawel” in the novel), and then wander along the road that leads downhill to the north. There is not much to see, but a bank and ditch can be made out, giving an idea of the vast size of the settlement. Recent excavations have shown that it was densely packed, too. This, almost certainly, was where the men and women lived who built Stonehenge.


My challenge was to imagine it as it was in 2400 BC, bustling with people, the biggest settlement that England had ever seen. In doing so, I made use of the archaeological evidence, of course, but that will never provide a complete picture. There was a great deal that I had to make up. I did look carefully at the flora and fauna of the area, and incorporated much of it into my descriptions of the place and its seasons, including species (the great bustard, for example) that are now extinct. I have done my best to make the place live again, as it must have done forty-four centuries ago, with as many of its colours, sounds, smells and textures as I could imagine. It was a place that attracted people from far away, a place, almost certainly, where several languages would have been spoken.

We will never know what these languages sounded like but, in the cadences of the dialogue, I have tried to depict their diversity.

Blurb:
Undreamed Shores is an epic journey narrative set at the dawn of the Bronze Age, a story of love and loss, jealousy and betrayal, against the background of a rapidly changing society. A stranger in an unknown land, one man embarks, with the woman he has come to love, on a voyage of discovery that will change not only their lives, but those of all around them, perhaps even the course of history itself. 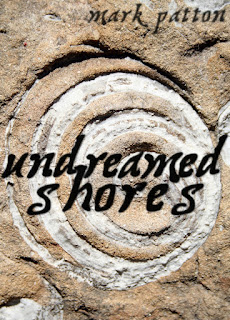 They walked on up the…path, passing row after row of tiny square thatched houses, with frames of wood and walls of wattle and daub. There were people everywhere. Old men sitting on logs in the door-frames of their houses; old women gossiping with one another; young men chopping wood with axes, or seated cross-legged on the ground knapping flint; women carrying water jars on their heads; children running and shouting, brushing past them as they picked their way between the houses.

Nor was it only people. There were dogs, mangy animals, running down the passages, fighting over pig bones, squatting to shit outside peoples’ doors, and lifting their legs against houses. There were pigs and piglets running along, snuffling between the houses in search of a meal, and goats wandering around, and even cattle lurching up against the wooden buildings.