Cathie, thank you so much for hosting me today. I’m thrilled to be talking about one of my favorite subjects: writing romantic suspense!

Here they are:  My Top Ten Tips for Writing Romantic Suspense

Immediate Action: Jump right into it on the first page. A romantic suspense is not the same thing as a mystery. It’s not a whodunit. The stakes are clear right from the beginning. The villain’s identity is not a secret. Suspense is created by letting the reader in on everything that’s happening and gradually raising the stakes and increasing the tension. There’s no better rollercoaster ride than the dips and highs of danger and hope building the suspense to a breaking point.

A villain worthy of the name. Whenever I think of great villains I think of Heath Ledger’s Joker. Or Cruella de Ville. You hate what they do but you can’t wait for them to show up. They do bad things. They have their own warped sense of honor. Reasons for doing what they’re doing. Passionate ones. They’re strong, they’re intelligent, and they’ll risk it all to win.

A Hero to die for. If I were to pick one must have trait for my ideal hero it would be a sense of honor. A strictly held to Code of Conduct. If honor is synonymous with honesty, fairness, and integrity in one’s beliefs and actions than the hero must be honest, fair, and true to his beliefs. And, above all, he had better back it up with his actions. Also a set of Core Values that speak to what the hero wants. To his motivation. These could be, but are certainly not limited to power, glory, freedom, or revenge.

Impossible Choices. Taking the hero’s code of honor and creating a situation in which he’s forced to choose between his beliefs and refuting them. Or, why Mr. Darcy can’t possibly marry Elizabeth Bennet. Can he? Of course, he can. But not before Jane Austen takes all that pride and his prejudices along with everyone else’s and shoves it all at him and tortures him first.

Setting: You need to own it. Make it come alive. It’s the details that bring a story to life. In my small town of Aspen Lake residents stop in at Mary’s Diner for her famous homemade Saskatoon berry ice cream. At the end of the day, patrons check in for a beer and a game of pool at The Back 40, the local pub. Most of us have been to Starbucks or McDonald’s. When I read I went local flavor, local culture, local angst.

Tone and Mood: Staying true to the overall tone of the story. It’s a romance but it’s also a suspense. You have to figure out how you’re going to balance the two. Does it lean towards light and humorous? Maybe it’s dark and gritty. That’s the overall feel. Mood is more emotional. It shifts as point-of-view changes. The story maybe dark but the mood of a particular scene can be hopeful.

Prolonging the moment: In regards to action scenes, recognize the important moments and make them last. Have them leave the biggest impression. It can’t all be physical. It starts with an action. Then you want to intensive the mood. Take a second to simplify what’s happened.  Maybe divulge something about the character. Before you move forward with a reaction. You don’t want to bog things down with too much introspection, just give the sense that what’s happening is an important turn of events.

Sexual Tension: Sexual tension parallels the external plot. It intensifies along with it. Use the vulnerability that comes with growing attraction to ramp up the strain and confusion. Use the old adage of sex being a great stress reliever. Give your characters (and the reader) a break from the tension. Then gradually turn it into something hopeful and purposeful.

Leaving it all on the page. Think it, write it. No holding back. 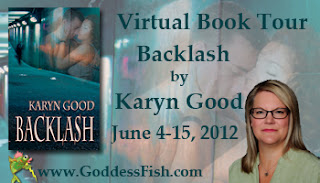 Backlash
by Karyn Good
BLURB:
What he’s sworn to protect, she’s willing to sacrifice to save those she loves...

When dedicated teacher Lily Wheeler interrupts a vicious gang attack on one of her students, she vows it won’t happen again. But her rash interference puts her in the path of a cold-blooded killer and the constable tracking him—a man she has little reason to trust, but can never forget.

Constable Chase Porter returned to Aspen Lake to see justice done, not renew old acquaintances. But when he rescues the woman he once loved from a volatile situation, he realizes his feelings for Lily haven’t lessened over the years.

Now, the dangerous killer Chase has sworn to capture has Lily in his sights. Can Chase and Lilly learn to trust each other again before it’s too late—or will old insecurities jeopardize their future?

“You’re being ridiculous, you know.”
Hell. On. Earth. It had to be. Where else would he find himself stuck in a confined space with someone who looked and smelled like candy coated chocolate and thought like a Rottweiler?
“And unreasonable.”
“If by unreasonable you mean right, then, yes I am.”
“Turn left here.”
“I know where to turn.”
“See what I mean.” 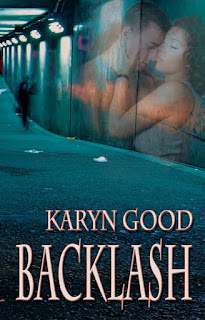 Someone shoot him. He knew from firsthand experience it was less painful. “So besides ‘female intuition’ do you have any other reasons why he might be hiding in the woods?”
“Not really. But it’s a small town and there aren’t that many places to hide. So, I’ve been trying to think of any abandoned buildings, that kind of thing.”
Her idea made sense, and it stung. Hell, he should have thought of it. Would have thought of it if lust and rational thinking made a compatible combination. “Okay, we’ll give it a shot.”
His old hideout in the woods was a bust. No sign of recent habitation, nothing but tall grass, wild bush, and bad memories. “Any other ideas?”
“One or two. There’s an old house, you might remember it, used to be the Danforth place. It’s close enough to town without being in town. It’s empty, has been for a while.”
“I remember it.” Without thinking he offered a smile and held out a hand to her like he had numerous times in this same spot. “Come on, let’s go check it out.”
She paused for a couple of seconds. Her thought patterns played across her face. He kept his hand out anyway. She ignored his offer and his hand. Instead, she walked past him to climb into his truck. He swiped his hand through a patch of thigh high grass. Message received.

I grew up on a farm in the middle of Canada's breadbasket. Under the canopy of crisp blue prairie skies I read books. Lots and lots of books. Occasionally, I picked up a pen and paper or tapped out a few meagre pages of a story on a keyboard and dreamed of becoming a writer when I grew up. One day the inevitable happened and I knew without question the time was right. What to write was never the issue - romance and the gut wrenching journey towards forever.

Karyn will be giving away a $25 Amazon.com gift certificate to one randomly drawn commenter during the tour. Discuss her writing tips her here or discover more about her at her other blog tour posts.