Sárka-Jonae Miller is a novelist and a health and fitness writer. She has more than 4,000 articles published online and in print. She is a graduate of the S.I. Newhouse School of Public Communications at Syracuse University. Before writing full-time, Sárka-Jonae was a personal fitness trainer and massage therapist. In her free time, Sarka-Jonae likes to do flash mobs and find her way into music video shoots. She has appeared in the Michael Jackson videos "Hold My Hand" and "Hollywood Tonight." She also practices kung fu and yoga. 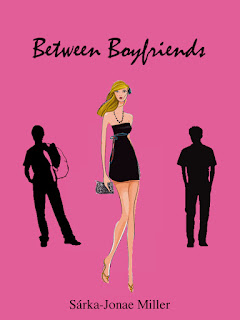 Jan Weston is boy crazy, emphasis on crazy. But when "The One" breaks her heart, Jan vows to change. She quits dating, starts exercising and tries to be a better friend.

Her progress is derailed when her mother finds out that she dropped out of San Diego State University to attend massage therapy school. Furious at being lied to, Mrs. Weston cuts Jan off. Now Jan is without a guy, her American Express card and a way to pay for school. She has to do something so despicable, so vile, so cruel, she almost cannot imagine it: Jan has to find a job. With the support of her real friends and the hottie from her massage class Jan is able to survive, barely. But can she really change, or is she temporarily between boyfriends?

As she snipped, sprayed, and fantasized about putting a voodoo death curse on her ex, she felt better. She smiled at the bits of hair falling about her like blonde snowflakes. At least she had control over her hair. Who cared if guys dumped her left and right? So what if she had wasted an entire weekend crying in bed?
This happens to everybody, Jan assured herself with false confidence. Right? Moving on.
A glance in the mirror revealed progress. The knots were nearly gone. She was about to congratulate herself when something in the reflection caused her stomach to knot worse than her hair. A look south confirmed she was indeed wearing a pair of Mike’s boxers. She gagged and put her hand over her mouth to discourage barfing up a Tic Tac.
She was about to run back into her bedroom to change when she noticed the comb in her hand.
This was Eric’s, she realized after she noticed the engraved initials E.T. on the wooden handle. She scoffed as she remembered the ex-boyfriend whose obsession with his hair had compelled him to carry a comb and gel everywhere, sometimes even to bed. Jan opened her seldom-used medicine cabinet – she preferred leaving everything on the counter where she could get to it easier – and found a travel-sized bottle of L.A. Looks Mega Mega strength hair gel on the bottom shelf. Lying next to it was a man’s razor. Jan took the razor out to examine it. Several thick black hairs protruded from the end. Chad’s maybe? Chad had been a surprisingly hairy ex. Or Fernando’s? Not so surprisingly hairy.
As she placed the razor back in the cabinet she noticed a stick of men’s deodorant and a pair of rusty toenail clippers on the top shelf. The clippers were a mystery, but she had a stinking suspicion to whom the deodorant had once belonged. She grabbed the stick of Autumn Breeze and pulled the cap off before taking a good whiff.
“Gross,” she cried and threw the pungent deodorant in the trash.
More like Autumn Sleaze. Definitely Steve’s. Jan looked around. What other smelly crap do I have around here?
A thorough search revealed a bottle of Axe body spray, four used toothbrushes, two bottles of bargain-brand shampoo, a half-used bar of soap that was stuck to the pipe under her sink, and some lame gifts she had forgotten about. A lemon-scented candle and some abrasive bath salts – not meant to be exfoliating – joined the ranks of junk on her counter. She was pretty sure both gifts had come from an international student she had dated freshmen year. She could almost remember his name.
The trip down memory lane was highly amusing. She snickered as she remembered all the losers she had dated during the three years she had lived in the apartment. Yet with each name that popped into her head as she touched a new item, a breakup memory popped in alongside it. She scanned all the items on her counter. Her legs buckled. She swayed and grabbed the counter for support. All of a sudden, it didn’t seem so funny anymore. None of the other guys had stayed around as long as Mike had and yet each parting had been painful in its own way.
Jan’s already fragile mental state nearly collapsed altogether when she realized that this weekend was not the rare occurrence she had shrugged it off as. She let go of the counter and sat down on the toilet seat. She put her head in her hands. The hollowness she had felt in her chest earlier seemed to have taken over the rest of her body.
I would give anything for someone to hold me right now. Jan realized that she would trade her Platinum Amex card, her MAC makeup, and all her shoes for a hug from one person who truly cared.

What Reviewers say:
"This story is about having the courage to change but, more important, the willpower to do so."

"This book reminded me a little of the characters from Something Borrowed, and a Bitch called Karma. Its a good beach read, or travel book."

"A good read that will be enjoyed by all. The characters are real and bring laughter to the reader on most pages."