July 05, 2012
Today, I refuse to comment about the poor weather. Long given up the hope for sunshine.

So, on a brighter side, I welcome fellow romance author, Lillie Spencer. I've set her a few questions to find out more about her writing life, and her romantic suspense, Manhunt.

1. How did you get into writing? Have you always wanted to be a writer?
My mom recently gave me a velvet covered journal of mine from elementary school that I had filled with poems and short stories, so I suppose it's always been in my blood.  It's my passion, my sanctuary.  I'd written countless stories before I worked up the courage to submit Manhunt.

2. Your release, Manhunt, sounds intriguing. What was your inspiration for the plot?
I know it sounds completely cliché, but it just came to me.  I was actually sketching out a paranormal romance at the time, and Manhunt popped into my head and wouldn't let go until I wrote it.  It was the first time I'd written romantic suspense, and I loved it.  It was so much fun weaving together the romance and murder mystery elements within a story that at its heart is about love and redemption.

3. What are you working on at the moment? Any new releases coming soon?
I'm working on a paranormal romance at the moment - the one I put on the back burner to finish Manhunt.  After that, I'm going to write a companion story to Manhunt about Michael and Nikki's best friend, Christian.

Thank you for having me!

Blurb:
Sometimes you have to forget it all to remember what really matters. 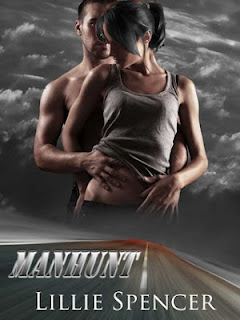 Michael Brennan's life and career come to an abrupt halt when he receives a phone call telling him the love of his life, Nikki Wright, is in the hospital after another attack by her ex-boyfriend Sebastian Cross. Rushing back to Hershey, PA, Michael turns up at Nikki's hospital bedside covered in Sebastian's blood and tells her they have to leave immediately.

Though her injuries have induced amnesia, Nikki inherently feels she can trust this man with her life. Soon, they find themselves on the run from both their own troubled pasts and authorities hunting for Sebastian's killer. With each new day and each touch drawing her further into Michael's embrace, Nikki remembers more about this fugitive she once loved, and who still loves her enough to risk everything to protect her and keep her safe.  But can she love a man who just might be a murderer?

Excerpt from Chapter 2:
Forty-seven minutes later, Michael ran into the emergency room, searching for Nikki, nervously tugging his shirtsleeves over his red hands as he ran. His father spotted him from down the hall. Aaron moved quickly, his eyes flickering around the room at a dizzying pace, and dragged Michael into the scrub room, throwing the water on as hot as he could before shoving Michael’s hands underneath. Upon closer inspection, Aaron could see that under the jacket and long sleeves, Michael’s forearms and hands were covered in blood, drying and coagulating in some spots, still glistening wet in others. There were dark, wet patches on the knees of his dress slacks. The implications made his stomach churn with dread.
“I don’t have time for this, Dad. Where’s Nikki?” Michael’s voice was frantic, his mind working a mile a minute.
“Like hell you don’t,” Aaron hissed. “Nikki’s awake, but she’s in a fragile state. No way am I letting her or anyone else see you until you have gotten every drop of blood off you. Seriously, Michael? What the hell were you thinking? I don’t know what you were trying to accomplish, but I assure you that while beating the crap out of Sebastian might have felt damn good for a second or two, the consequences will be far reaching. I’m not sure that’s something you took into consideration.”
“Where’s Nikki?” he repeated, drying his now clean arms off as he glared at Aaron, completely ignoring anything not related to the room number he sought. He was just about to go on a mad dash through the E.R., opening doors and throwing back curtains until he found her. “Exam Room 9,” Aaron whispered.
"Nikki!" Michael half-screamed, half-sighed as he walked in the room. On the hospital bed lay a vision of beauty, despite being gaunt from either a lack of food or sleep and covered in cuts and bruises, her entire torso wrapped up in gauze and tape.
“Who are you?” the girl asked, looking skittish.
“It’s me, Michael.”
She tilted her head and scrunched her eyebrows, the way she always did when she was trying to understand something that confused her.
Michael’s heart broke at the realization; she was suffering from amnesia. He shook his head to refocus on the task at hand and began searching through supply drawers for her clothes. Finding none, it occurred to him that they had probably been bagged as evidence. He quickly unbuttoned his dress shirt, which was far from clean but would have to do, leaving himself in just his white undershirt, and returned to the bed.
“No time to explain. I’ve got to get you out of here.” Without another word, he removed her IV, took her hospital gown off without a thought for her modesty and pushed her arms through the sleeves of his shirt as delicately as he could.
The injured girl tried to fight back, but didn’t scream. He took her face between his hands and pleaded with her.
“Nicole, I realize you have no idea who I am, and you don’t understand anything that is happening to you, but please believe me when I tell you that we need to get out of here. Right. Now. Please, trust me?”
She hesitated for only a moment before nodding slowly.