Elizabeth has kindly offered a free e-copy of Fatal Fortune to one lucky commenter. Simply leave your comment below to be in the draw.
Good luck!


Hi! I’m Elizabeth Delisi, and I write in several genres or a mix of more than one: mystery, paranormal, romance and suspense. You can find out more about my books at my website, www.elizabethdelisi.com. I live in beautiful New Hampshire with my husband and bossy parakeet.

My Place:
We’ve lived in many of the fifty US states in my life, which is a lucky thing for a writer. Lots of fodder for the imagination! I’ve lived in several of the plains states in the Midwest, and was fascinated by the flat landscape where you can see for miles in every direction. Really makes you feel small! And you get the most gorgeous, colorful sunsets and vibrant rainbows. Many of the towns are small and have a last-century feel, and the people are always ready to lend a hand when needed. So when I needed a setting for FATAL FORTUNE, I chose North Dakota as the perfect spot. 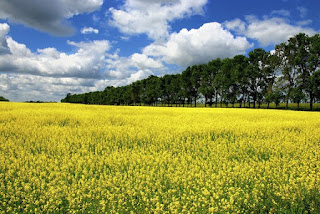 These images capture some of the feel of North Dakota: a cemetery with a water tower, a stretch of empty prairie, a suburban tree-lined street, and a field of flowers bordered by a windbreak of trees. 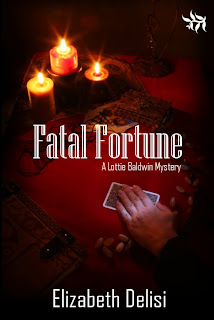 No one in Cheyenne, North Dakota believes in Lottie Baldwin’s psychic abilities; especially not Harlan Erikson, Lottie’s boyfriend and Chief Deputy in the Sheriff’s Office.
When a friend’s husband disappears, Lottie can’t leave it to Harlan to discover what happened to Harry.
Armed with her courage and her tarot cards, Lottie tries to solve the mystery herself, regardless of who attempts to stop her: Harlan, her friend—or the criminal.


Excerpt:
November 10, 1980
Harry Larson turned into the rough dirt clearing surrounding the old Cheyenne water tower. He drove in a wide, slow arc, facing the car in the direction he’d come. He wanted to be ready to leave in a hurry.
The headlights shone through the rust-covered legs of the tower, casting an eerie shadow like a huge, misshapen spider waiting to pounce on an unsuspecting victim.
He turned off the lights and killed the engine. Darkness enveloped him. There was no moon tonight.
As he waited for his eyes to adjust to the darkness, he strained to hear a noise. The roar of a motor, perhaps, or the crunch of tires. But there was nothing; not a sound.

At last he was able to discern vague objects: the silent water tower humped above him; the withered stalks of a November cornfield on one side of the tower; the nameless, leaning tombstones of an ancient cemetery on the other.
Then he saw something familiar in the far corner of the lot. A bulky shape, boxy and squat. It was a car. How long had it been sitting there? He hadn’t noticed it when he pulled into the cemetery or when he’d backed into the spot where his car now sat.
Harry squinted, trying to see better. He thought he could make out a dark figure sitting on the hood. His heart thumped in his chest.
He chuckled nervously, running his hands through his thinning brown hair. His errand was serious, no doubt of that; but he was letting the overgrown cemetery influence him too much. Next, he’d have the figure flapping a monstrous set of bat wings and flying off into the night. Ridiculous.
He opened the car door. The cold North Dakota wind rushed in and surrounded him. He got out and slammed the door, trying to retain some of the heat. His eyes never leaving the still figure, he walked away from his car, his cocoon of safety, into the overgrown back corner of the lot.
He felt the figure watching him as he approached, waiting for him to come close.
Harry was within fifteen feet now. Twelve. Ten. He could still turn and walk away—run, if he had to. He didn’t have to go through with it. If he didn’t say anything, no one else would ever find out.
He thought of Janet. Sweet wife. What would she think of him if she knew? Would she want him to close his eyes, to pretend he didn’t see what was happening right under his nose? Would she put personal safety above integrity?
Then, there was Laura. When she grew up, would she be ashamed to discover that her daddy had been a coward?
Harry squared his shoulders. He’d do what he’d set out to do. He would stop the thing before anyone got hurt.
He stopped in front of the car where the figure remained on the hood. Having decided his course, Harry plunged in. “I know what you’ve been up to. I know all about it. Did you really think I wouldn’t find out? You didn’t cover your tracks very well.”
The figure grimaced. “You have more intelligence than I gave you credit for, I admit.”
“You can’t believe you’ll get away with it. If I found out, then other people will, too. Sooner or later, you’ll be stopped.”
“I don’t think so.” The voice was thick with conceit. “I have, as the saying goes, friends in high places.”
“Do you think they’ll go out on a limb for you? Jeopardize themselves, their careers and reputations, to protect you?”
“Yes. They have to. They’re in no position to do otherwise. I have certain...information about them. Information that could be very embarrassing, to say the least, if it were to come out.”
“I see.” Harry rubbed his hands together in the frigid night air, stalling for time. “That still leaves me. You can’t possibly have anything incriminating on me, and I don’t intend to back down.”
There was a short silence. “We’re both reasonable people,” the figure said at last. “I can make it worth your while to keep this quiet. Think of all the things you could do for your family with a large ‘bonus.’ You’ll find I’m very generous with my friends.”
Harry waved his hand. “No deal. You can’t buy my silence.”

The dark figure clenched its fists, raising them to chest level. “Then, you give me no choice. You can’t stop me.”
“Oh, can’t I?” Harry shook his head in disgust. “When you asked me this afternoon to meet you here, I hoped you’d had a change of heart, and I was willing to support you. I would have stood by you all the way. Obviously, I was wrong. I’ve been a fool.”
He turned away and started back toward his own car. The night air was crisp in his nostrils; a light snow was beginning to fall. Though disappointed at the outcome, he felt shaky with relief that the ordeal was over.

He heard a sudden, furtive noise behind him. Harry jumped, started to turn. Before he could see the source of the sound, face his foe, he felt a crushing blow on the back of his head. A million hot sparks exploded behind his eyes as he sank down toward the frozen ground.
For a moment, Harry lay motionless. The quiet night air was full of unwonted sound: heavy footsteps; muffled rustling; the jingle of keys. The car door slammed and tires spun. Above it all, he heard his once pounding heartbeat slowing as his body relaxed. The last thing he saw was the car’s red tail lights fading into the distance. And then eternal blackness overcame him. 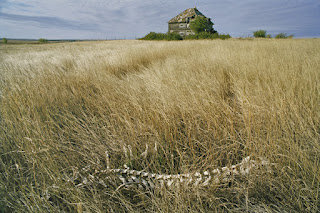