August 19, 2012
Today, I'm thrilled to welcome back my wonderful friend, Kemberlee Shortland, author of heartfelt romance set in Ireland. If you enjoy a dramatic setting with deep characters and a moving plot, try Kemberlee's stories. You won't be disappointed!

Today, she chats about the Irish city of Dublin, the setting for her latest release, Rhythm of my Heart. Handing over to Kemberlee...

Hi Cathie! Thanks for asking me to be here today to talk about the setting for my recent book, Rhythm of My Heart. This is part of the Irish Pride series.

This book is set between two primary locations, Dublin City, Ireland, and the mountains of West Cork in an area the locals call the County Bounds . . . because the county boundary joins with County Kerry. It’s the only place in Ireland, BTW, that calls their borders a ‘bound’. Only in Ireland!


Dublin City is Ireland’s capitol city. It’s full of history, varying cultures and loads of interesting things to see and do. Music plays a huge part in Ireland’s overall character so it seemed natural for me to write about a musician, blues guitarist, Kieran Vaughan, and a former blues singer, Eilis Kennedy. Blues in Ireland? You’d be surprised at how popular the blues are. There’s an annual blues festival in Cork that’s great fun.

Dublin, as most cities in Ireland are, has a north side and a south side which are separated by river. In this case, it’s the River Liffey. Traditionally, the ‘northside’ of Dublin is working class and the ‘southside’ is more posh. Certainly, the accents vary quite a bit, with the northside accent being grittier and rough around the edges. Whereas the southside accent can be very flat or sometimes sound pretentious. In my story, while Kieran’s family originated from Cork, he’s currently living in the northside and working in small pub which has seen better days. Eilis lives in the southside and currently working for Eireann Records. Kieran describes their differences as – “He was a Northsider and she was a Southsider. Two people couldn’t be more different. She had class to his brass, elegance to his simplicity, chic to his cheek.” Chalk and cheese maybe? But that’s Dublin for you.

The story visits one of Ireland’s most famous tourist towns, Killarney in County Kerry. Of course, we visit a pub, but the visit is short lived and Kieran takes Eilis to his restored family home in the West Cork Mountains. This is a traditional thatch cottage with whitewashed walls and yellow trimmed windows. Flower beds, woodland and a stream running through it . . . every Ireland-o-phile’s dream getaway! Rhythm of My Heart is full of bustling city streets, visits to some historical icons, and that great traditional Irish lifestyle. This book has it all, if I do say so myself! 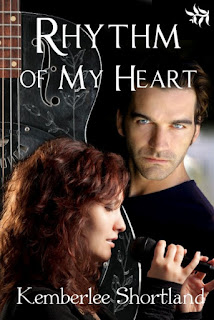 Artist Representative, Eilis Kennedy, gave up a singing career so that other women could have a fair chance at having their music heard. Having suffered rejection from callous men in the industry, she thought she would get away from ‘casting couch’ mentality. But when she finds herself in the office of Fergus Manley, all bets are off. Disgusted by his continual come-ons and lewd invitations, Eilis is looking for ‘the one’ who will take her career to the next level, getting out from under Fergus’s controlling thumb.

Aspiring blues guitarist, Kieran Vaughan, is looking for his big break. But after suffering near bankruptcy at the hands of an unscrupulous business partner, Kieran is left picking up the pieces. He’s unsure if the debts will ever be paid or if he’ll ever have a chance to do something with his music. At his whit’s end, he’s about ready to throw in the towel and find a full-time job with real hours.

When Eilis discovers Kieran playing in a seedy pub in Dublin’s Northside, she knows he’s the one rare talent she’s been searching for. With her know-how and his talent, Eilis will finally get everything she’s been waiting for. Neither of them count on the powerful attraction from first meeting. Eilis is so rocked by Keiran’s forthright words that it sends her running. Kieran risks being arrested as he chases Eilis across Ireland.

Seeing what’s happening between Eilis and Kieran, anger wells inside Fergus and he steps up his pursuit of Eilis. Refusing to let Kieran get in his way, Fergus vows to add Eilis’s notch to his bedpost, whatever it takes.

Will Kieran be able to protect her?

Excerpt:
When the laughing stopped, Eilis’s gaze never wavered as she said, “Well?”
“Well what, loov?” he asked, wiping the tears from his eyes with a dirty bar towel.
“Are you going to tell me where to find Kieran Vaughan?” He was trying her patience, but she did her best to keep the frustration out of her voice.
Then she sensed someone step up behind her and straightened instantly. Somehow she knew it was Kieran. The feral scent of him permeated her senses and quickened her pulse. Butterflies replaced the strange ache in her stomach that had been there just moments before.
She turned slowly and looked up at the most handsome man she’d ever seen in her life. She found herself instantly speechless.
She'd seen him on stage the night before and knew he was handsome. But this close up . . . Never before had she seen such blue eyes. And as she gazed into them, they changed from the light steel blue to the color of storm clouds heavily ringed with gunmetal. That he had dark brows and thick lashes only made his gaze seem more intense.
“Ye’ve found him, loov,” said the little man, taunting her. “Now what are ye goin’ ta do with him?”
The hammering of her heart and the pulsing blood in her temples blocked out the noise in the room as she looked into Kieran Vaughan’s eyes. To her dismay, her knees actually quivered.
Something in the pit of her belly ached. No, something else. It was like warm melting honey running through her marrow. In that moment she longed to touch him, to brush the unruly wave of his dark hair away from his face, to feel his lips against the pads of her fingers, to . . .
When he spoke she almost didn’t hear him.
“Like the man said, now that you’ve found me, what are you going to do with me?” His eyes sparkled with unabashed mischief.
“Anything you want me to.” 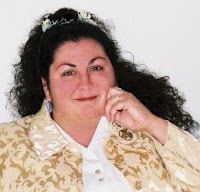