August 15, 2012
Today, Nickie Fleming stops off here on her tour promoting her latest release, The Gold Crucifix. I took the opportunity to ask her some questions.

Welcome to my blog, Nickie. I'm delighted to have you on board.


1.) At what point in your life did you realise you wanted to be a writer?
I realized I wanted to be a writer when I was reading books and already at an early age. Often I thought: hey, I can do this too! And as soon as I was old enough to think out stories, I began to note them down. I finished my first full length novel at 16 years of age, and this was the first draft of ‘Maria Gonzalez’. This version already tells about Maria’s adventures in Mexico, but I added the rest of the chapters when I ‘fished up’ the idea and wrote the book that was published a couple of years ago.


2.) What triggered your interest in writing historical fiction? 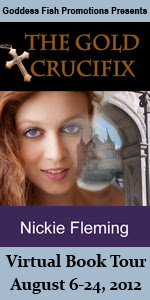 When I was a little kid, and was sitting on my grandfather’s lap (he and my grandmother minded me when my parents were working). He was a veteran of two world wars and he often told me stories about times past. He also was a keen reader and he read to me from his French books (his father was born in the French speaking part of Belgium), especially from Alexandre Dumas. When I grew up, he allowed me to use his Laroussse Encyclopedia which he himself herited from his father. Every time I read something, I looked up the event in the Larousse (of course, the event had to take place before 1876, the date of this editon). At school my favorite subject was history and it has always fascinated me.

3.) How do you conduct your research?
I must admit I don’t do a lot of research. As I told before, I was always nosing into books and encyclopedias and everything that interested me got noted down on little cards which I kept in empty shoeboxes. I still have a couple of them and they contain a wealth of information, often better than Google!

4.) What are you currently working on?
Currently I am working on a new novel, which I have given the working title “The Black Coach”. The idea is based on a short story which is in “Face in the Mirror and Other Stories”, a bundle of horror stories for Halloween. In one of them, people talk about a black coach that is driven by the devil and lures away girls. I thought this could be a full length gothic novel, and so I’m working on it. I hope to have it finished by the end of this year.

5.) Do you have a word of advice for new writers?
I often visit writers' forums and there are always a lot of newbies on them. Young writers who are not sure what to expect. My advice to them is first of all, write something (it doesn’t matter what) but see to it you have an eye for spelling and grammar. Polish and rewrite when necessary. Then don’t give up at the first rejection – remember that bestselling authors also got their fair part of them!

Thank you, some sound advice there! :-)

BLURB:
England, mid seventeenth century. When young Sarah finds out that innkeeper Amos Jennings is not her father, she feels uncertain and scared. Her problems grow bigger when she starts a job as housekeeper and gets involved with two men who both want her love: the earl of Linfield, and his younger brother Richard. To escape these problems, Sarah takes off to London to begin a new life as actress at His Majesty’s Theatre.

Richard cannot forget the young woman her met at his brother’s. He is determined to find Sarah and make her his own--even his wife, despite what his family thinks of it. But love never comes easy. Richard and Sarah will have to face many a storm--even the Great Fire of London--before they can become one.

EXCERPT:
It happened in the last bend of the lane, just before the clearing where the lawns and flower-beds of the manor became visible.
All at once Sarah heard the thundering of a horse in full gallop, and before she could even jump to safety, she was pushed off the road into the soft grass of the verge. She was so stunned she did not hear the curse of the horseman and how he pulled his mount to a standstill.
Slowly, she crawled to an upright position and immediately noticed the pain in her right knee. Neglecting the fact that her basket had fallen and its contents were shattered over the path--some of them trodden on--she started to rub her knee fiercely. Only then did she notice the man, who had turned his horse and who was now throwing disdainful looks in her direction.
Suddenly, she realized what danger she had barely escaped. This notion triggered a fit of anger, which became so violent she turned hot and enflamed. Returning his glances with eyes that shot fire, she snarled, "You fool! You could have hurt me!"
The look in his eyes remained cold, but the tone of his voice revealed a show of interest.
"In case you shouldn't know, let me warn you that you find yourself on private property," he said. 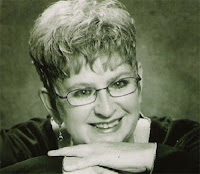 Nickie Fleming was born and raised in the historical town of Dendermonde, Belgium – home of the legendary Horse Bayard.
She read English Literature at the University of Ghent, and got her master’s degree in philology. Since then, she has been working as a high school teacher.
Her interests besides reading and writing are travelling, skiing in winter and enjoying fine food. 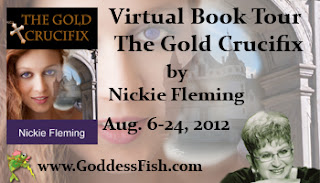