Today, I welcome author Sue Perkins who chats about her new release, The Sixth Key, as part of her blog tour.


Thank you Cathie for inviting me to your blog.

My latest  release is 'The Sixth Key' a fantasy romance suitable for anyone over the age of sixteen. Although I write novels for middle grade, young adult and contemporary romance, fantasy is my favorite genre.

The world of Sacral is my own creation with magic, castles, horses and magical beasts. The ruling  people are telepaths but my sympathies are with the Mutes. These people have been outcast by the rulers simply because they have no psychic powers. The banishment has been going on for a long time and the Mutes now have many psychics in their midst. Sometimes the powers skip a generation, but also loved ones are not prepared to let their husbands, siblings, parents or children go into exile on their own. The aim of the Mutes is to combine the two peoples to become one again.

When Riley finds the Riddle of the Keys, she realizes if she solves the riddle she can bring the two factions back together.

I hope you enjoy the excerpt below and don't forget to leave a comment to be in to win an ebook of 'The Sixth Key' to be drawn at the end of the blog tour.


Blurb:
Knocked down by a truck Riley wakes on another world. Her ex boyfriend Jothur has transported her there to help his people learn to shield their telepathic minds, although he doesn't tell Riley this. She dreams of two Jothurs, the blond boyfriend and a dark mysterious man. Danger threatens Riley and she flees to the Mutes. The non-psychic Mutes, led by Tynan, will be destroyed if Jothur's people learn to mind shield. Riley must use the Riddle of the Keys to learn the truth of Sacra's past and decide who to support in the battle for the future. 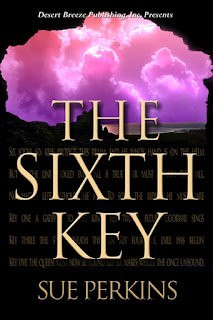 Riley expected to see a road. Zlora's huntress clothes indicated the planet might be lacking any technology for sealed surfaces, but she'd thought they would have tracks for carts and wagons. Traffic continuously using the same route eventually wears ruts in the ground to show the way. The earth in front of her lay undisturbed.
"Can you ride?" Zlora interrupted her thoughts.
"Horses? Yes I've ridden before." Riley neglected to mention she'd based her riding experience on a brief holiday on a dude ranch. Thank goodness I wore trousers to work today.
A vacant look appeared in Zlora's eyes again. Riley stood quietly, not wanting to interrupt the huntress. After a few moments Zlora relaxed and looked up at the sky. Riley followed her gaze but the sky looked empty. What were they looking for? A smudge at treetop level quickly turned into--
Riley stared in disbelief. Two flying horses headed in their direction. She gulped nervously. Zlora had asked about riding -- not flying. Her novice experience might have been able to cope on the ground, but flying through the sky with so much space below her? What about the gravity itching to drag her down to earth? A shudder of apprehension passed through her.
The flying horses landed and pawed the ground. Up close they looked completely different than the horses of Earth. They were twice the height of a normal stallion, but much finer boned. Once they had landed, the wings folded neatly along their sides. A glorious black stallion and a delicate golden-brown mare stood before her. Both sets of wings were pure white.
The black lifted his head and looked at her. Riley's eyes opened wide as he gazed intently at her.
I hope he's not my mount. He looks mean.
"I'll take the black and you can have the brown." Zlora headed for the stallion. The tension in Riley's shoulders relaxed as she moved toward the mare. Unfortunately her relief didn't last long.
The mare stood quietly while Riley used a large boulder to clamber on her back.
I wish I could spring up on her back, but I'd probably end on the ground on the other side.
Zlora took off immediately, and before Riley had time to think, the mare followed.
One moment she'd been settling herself on the mare's back, the next they were airborne. Riley tilted backward; she grabbed the mane and dragged herself down onto the neck of the mare, where she hung on for dear life. Luckily her mount didn't need guiding as Zlora's stallion led the way.


Sue Perkins is giving away a e-copy at the end of her blog tour.
Leave a comment to be entered into the draw! 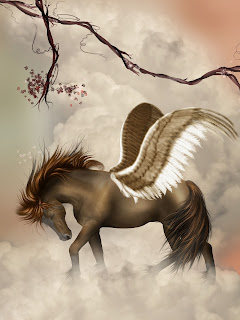