September 02, 2012
Well, here we are. It's September. Summer's gone (well, for us it never arrived in the first place), the nights turn cooler, and it's soon time to light the fire and snuggle on the sofa with a good read. So, here's another suggestion for you avid readers.

Today, I welcome romance author Lynn Crain to My Place. Her inter-galactic romance, The Harvester, takes the heroine from far away to Las Vegas, and beyond. Join her journey of discovery! ;-)

Thanks for having me, Cathie...boy was it hard to find pictures...LOL! You know when you live in a place, you don’t tend to take very many pictures unless it’s of family events or there’s something special happening. How much more special can you get than a girls night out (GNO) in Las Vegas, Nevada and that’s where my story starts. 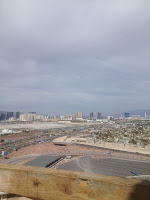 
This is a view of the strip from the airport tower. Yes, Vegas is nearly always brown since it’s a desert and hot. This particular day, it was cloudy and rainy. 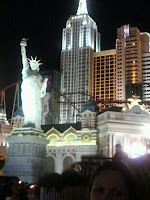 This one is of New York New York and is like many themed Vegas casinos. Across the street is the place where we saw the Thunder from Downunder that gave us the idea for our GNO series.

Now this one (below) is the kicker as it is of space. Yeah, the story starts in Vegas, travels the galaxy and ends up back on a private island. Go figure. 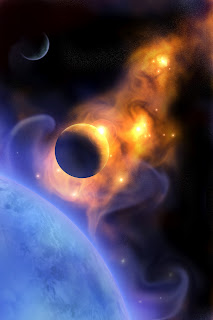 Blurb:
Princess Sky Xera Nerezsh came to earth to avoid the normal succession path to the throne. Being the oldest daughter, she will be required to murder her mother in order to secure her path to power. Sky loves her mother and refuses this path, choosing instead to disappear in the vast reaches of space. When her past collides with her present, she has to think quick on her feet, claim two men and a whole planet just to avoid the inevitable: a meeting with her mother. Along the way, she discovers true love and a burning need to be there for them always. Now if the other Harvesters can just keep to themselves, they’ll have no problems. But who said true love was ever easy.

Excerpt:
Suddenly one dark haired man was on the table in front of her, gyrating his sexy hips in her face, his package mere inches from her mouth. In another life, she would have leaned forward and planted her lips on his crotch, willing his body to perform. She really should have been paying more attention to the situation around her instead of wondering about where Angela had gotten herself.

Leaning down, his breath reminded her of the sweetgrass that grew on her home planet of Tyrsati, heightening her senses even more. “Sweetheart, I see how you want me...it’s written all over your face.” His voice purred in her ear. 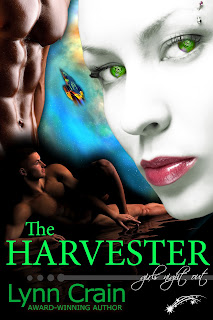 Sky gasped and pulled back to get a better look at the man in front of her. He reminded her of the gods of Vada. He was tall, well-muscled, dark hair brushing the top of his shoulders and had the most incredible violet eyes she had ever seen. Guess the optics weren’t wrong. He would fetch an exquisite price on Texra and her mother would be extremely proud for her acquisition. She shook her head to clear the cobwebs.
“Nice eyes, sweetie – hang around after the show – I’ll make it worth your while.” His voice hit a resonance with her and her whole body flushed. It had been years since she had reacted to any man. Now her emotions and body betrayed her for an insignificant being on an outer planet. She shook her head. This planet was no more insignificant than any other, including her own but she knew if she didn’t get herself under control, the Harvester in her would take over. Old habits die hard.
“Don’t let his demeanor fool you, luvey. He just wants to get into your pants.” Another deep voice reverberated close to her ear.
She glanced over her shoulder and again her breath was nearly taken away as she looked into the bluest eyes she’d ever seen in the galaxy bar none. The sky of Octa couldn’t hold a candle to the color that swirled in their depths.
“Ooo, Jaxon is right about the eyes. Very cool green.”
“Contacts,” Sky managed to get out for the second time this evening, her voice low.
“And a sexy voice to boot. Very nice.” He twirled away to join his companion on stage. He was just as nice looking as the first guy but just a little shorter. His shiny hair swung around his jaw line as he moved and her hands ached to run her fingers through it and over his body.
She sat there stunned as the people at her table laughed and clapped her on the back as if she’d done some sort of fantastic feat. While her time on this planet had been very thrilling, in her old life working for her mother, their performances had to be impeccable or their fate might be worse than death. She vaguely wondered just how she’d rate them.
Sky did her best to smile and act as if what happened was one of the most exciting things in her life when in reality it brought back some memories she’d rather forget. Folding her hands in front of her, she closed her eyes and steadied her breathing. She opened her eyes slow and caught a glimpse of a targeting laser. The light was in a part of the spectrum that no one of this planet could even see but her optics caught it.
Scanning the crowd, she allowed her eyes to whirl, not caring who saw. There were not supposed to be any Harvesters on this world as it had been declared too primitive to even be included in the Alliance of Planets. She came here because she knew this was the one place her mother wouldn’t think to look. Now, she knew another Tyrsatian walked the same world as she did, occupying the very same room.
Maybe it was time to see just what type of trouble Angela got herself into. Leaning across the table, she quickly gave Jayne her phone number and said her goodbyes to all the others present. Rising slowly, she didn’t want to alert the other Harvester but she was just far enough away and at a weird angle to not see who it might be. Moving quickly to the back wall, she moved to where she stood way behind the woman but close enough to see who it was.
Jesata Ardik. Of all the Harvesters to show up on her new home planet, one of the most relentless in the business had to land on her new home. This wasn’t going to be easy. She had to delay her from marking them because once they were marked, it didn’t matter wherever in the universe they were, they would be considered fugitives until captured and sold to the highest bidder. Meaning, she wouldn’t be able to get them off world without the help of her mother. 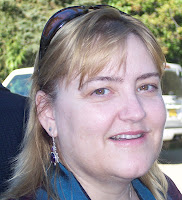 Lynn Crain has penned over 25 novels in romance in the genres of science fiction, fantasy and contemporary romance, erotic to tame in nature. She always knew that writing was her calling even if it took years at other professions to prove it. She has belonged to EPIC and RWA for more years that she cares to think about. Currently, she lives in Europe while her husband of nearly 30 years pursues his dream of working internationally. Her state-side home is in Nevada where family and friends wait patiently for their return. You can find her hanging out at A Writer In Vienna Blog (www.awriterinvienna.blogspot.com) and various other places on the net (www.theloglineblog.blogspot.com; www.twitter.com/oddlynn3 ; www.lynncrain.blogspot.com ;  www.facebook.com/oddlynn3 ) as well as her website www.lynncrain.com. Still, the thing she loves most of all is hearing from her readers at lynncrain@cox.net.