Because from today, Bad Moon Rising will be available in paperback! You know what that means? No excuses!


One more soul is safe.

Released earlier this year, the highly acclaimed story made it to the semi-finals of The Kindle Book Review 2012, it received raving reviews and rose high up the Amazon Kindle charts. New York Times bestselling author, Amanda Hodgkinson, called it, "Tense, fast paced and gripping. A brilliant debut.", whilst others have remarked on Frances di Plino's outstanding debut.


But just who is Frances?


Frances di Plino is the pseudonym of columnist, editor, non-fiction author, short story writer, poet and writing tutor, Lorraine Mace. Writing as Frances di Plino gives her the opportunity to allow the dark side of her personality to surface and take control. She is currently working on Someday Never Comes, the next in the Paolo Storey series following the highly acclaimed Bad Moon Rising. 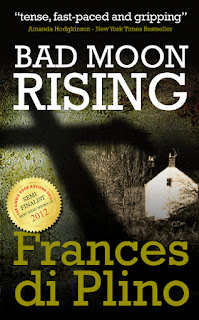 
One more soul is safe.

Brought up believing sex is the devil’s work, a killer only finds release once he has saved his victims’ souls. Abiding by his vision, he marks them as his. A gift to guide his chosen ones on the rightful path to redemption.

Detective Inspector Paolo Storey is out to stop him, but Paolo has problems of his own. Hunting down the killer as the death toll rises, the lines soon blur between Paolo’s personal and professional lives.

So, for you to get a taste of things, here's a bone-chilling snippet.

He sang softly as he cruised. Friday nights in this part of town never changed, thank God. It made his work easier. The whores plied their trade in streets where no respectable people came; only those who used their services knew where to find them. As he edged the car around into Beacon Street for the fifth time he finally saw the whore he’d been searching for. She was leaning against the wall, eyes closed as if in prayer. He hoped she prayed. If she did God might save her. Almost as if she knew he was there, she opened her eyes and looked over towards the car. She was perfect for his needs. Almost the image of the girl in his precious photograph. If God approved of his choice, he’d make sure that she’d never turn into the hag that girl became.

He slowed the car. It crawled forward a few yards and then stopped. He touched the button to lower the window on the passenger side. She stood up straight and smiled, a look of interrogation on her face. Why did they all look like that, as if they really wanted to get in the car and open their legs? His heart pounded and his hands felt slippery on the steering wheel. He could barely swallow. It was always like this when he came to collect one of God’s chosen.
If she turned and walked away that would mean God didn’t want him to take her. It’s up to you, Lord. She moved towards him, and he waited, shivering with anticipation. If she got in, then God had spoken and he would do His work. She reached the car and leaned in through the open window. He almost gagged as a cloying sweet scent filled his nostrils. Forcing himself to smile back at her, he nodded in the direction of the dashboard where a wad of twenty pound notes were resting on the leather in front of the steering wheel.
“Fancy a drive?”
She nodded and opened the door, slipping into the passenger side of the car.
“Like car,” she said.
He didn’t answer as he eased the vehicle forward and drove away. He didn’t need to make conversation.

Want to know what happens next? Here's where you can find it...