The indomitable amateur sleuths investigate crimes and usually manage to expose the culprits. And not just one, but two treats are in store for you this week as we post snippets from two releases, A Murder for Christmas (today) and Murder at the Murder Mystery Weekend (Friday).

So, I'm handing over to the man who created the team, murder mystery author, David W Robinson, to reveal the characters behind the Sanford 3rd Age Club (STAC) team. Here goes...

When reviewing The Filey Connection, the first STAC Mystery, one reader wrote, ‘The characters all seem like people you've met at some time’, and I feel that is part of the success of the series. The natural interplay between characters is one of the driving forces behind the tales, particularly the antics of the three central characters; Joe Murray and two of his staff, coincidentally, his two closest friends, Sheila Riley and Brenda Jump.

The three have been friends since the schoolyard, and the two women take great delight in mercilessly ribbing Joe at every opportunity. Not that Joe takes it lying down. He gets back at them whenever he can. And yet, beneath the ribaldry, there is a bond of genuine, lasting friendship which extends to mutual concern for each other’s welfare.


Joe owns the Lazy Luncheonette, a workman’s café which he inherited from his father. Tight-fisted, outspoken and irascible, he’s been happily divorced since his wife walked out on him. The drudgery of life behind the counter has seen Joe develop fine powers of observation. Little escapes his attention, as many a thief and murderer has learned to his cost. He is also the Chair of the Sanford 3rd Age Club, and makes good use of his fine negotiating skills when grinding down the price of the club’s many outings.

Sheila is the widow of the late Inspector Peter Riley of Sanford Police. A devoted wife and mother, she spent most of her life as a school secretary, and is the more serious of the three. Counter relief at the Lazy Luncheonette, she is a shoulder to cry on when it’s needed, able to deliver a stern lecture when the occasion warrants it, she can be hard and determined when she wants. Well-read, she is a mine of information and a useful advisor on police procedures. She also acts as Secretary of the Sanford 3rd Age Club, which role often includes mediating in disputes between Joe and other members.

Brenda, like her best friend, Sheila, is also widowed, but she has no inclination to turn her life into a shrine for her late husband. Assistant cook at the Lazy Luncheonette, she is a merry widow, who likes partying. She has a reputation for sleeping around, but both Joe and Sheila are aware that she is not quite as free with her favours as others imagine. More emotional than her two friends, she is courageous, yet soft-hearted, and her observations often point Joe in unexpected directions. A former senior bank clerk, she is treasurer to the Sanford 3rd Age Club.

There are other, regular characters in the series; people we meet in most titles. Captain Les Tanner, a former Territorial Army Officer, and supervisor at Sanford Town Hall, and his lady friend, the hypochondriac Sylvia Goodson. The charmer, George Robson, a gardener who works for the local authority, and his pal own Frickley, both of whom join the Sanford 3rd Age Club outings for the opportunities the present. There are the Staineses, Alec and Julia, a happily married couple who are always the first to close the blinds when they get to the hotel, and it’s not for sleep.

Back in Sanford, Joe’s nephew, Lee Murray is usually on hand. The head cook at the Lazy Luncheonette, Lee is a huge young man who was a prop for the Sanford Bulls Rugby league team until a knee injury ended his career prematurely. Detective Sergeant Gemma Craddock, Joe’s niece makes frequent appearances. A career cop who often orders her uncle to mind his own business, she never hesitates to ask when she needs guidance on a particular case.

The central characters in the STAC Mysteries may be in their middle years, but the series is not aimed at a senior audience. As they go on their travels, enjoying the best the British tourism can offer, this gang of born again teenagers will appeal to anyone who enjoys a light-hearted whodunit.

A Murder for Christmas is set in Leeds over the Christmas period. In the excerpt, Joe, Sheila and Brenda are on the bus making their way into Leeds, and Sheila is telling them about historian, Dennis Wright. 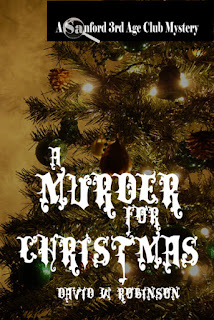 “I read about him in the Evening Post. He was born here, in Leeds, and moved to Leeds in Alabama when he was in his late twenties. Lived there ever since. Officially, he’s an authority on old coins but he also knows plenty of the history of both cities; Alabama and West Yorkshire.”

“Wait a minute,” Joe interjected. “He lives in Leeds but teaches in Birmingham? I wouldn’t like his petrol bill.”

Sheila tutted. “Will you forget England and think Alabama. From Leeds, Alabama, to Birmingham, Alabama is about 18 miles. It’s only like living in Sanford and working in Leeds.”

“West Yorkshire or Alabama?” Brenda asked with a cheeky grin.

Sheila sighed. “Don’t you start, too,” she warned. “I can’t see what’s so complicated about it.”

“It’s Christmas Eve and you’ve taken me away from the Lazy Luncheonette,” Joe grunted. “You can’t expect my brain to be in high gear, too.” He shook his head sadly. “I must have taken a wrong turn in life. I run a café and go nowhere; he looks into boring old cities and travels half way across the world for a Christmas party.”

“It’s worse than that, Joe.” Brenda smiled wickedly. “He’s happy and you’re as miserable as ever.”

Brenda’s dig and Joe’s responding grimace made Sheila giggle. More soberly, she went on, “He’s not just here for Christmas. He’s launching a book. Missing Pennies. It’s all about old and rare coins that have gone missing. One chapter of it is concerned with the 1933 Middleton Penny.”

“Nineteen thirty-three as in the year not the number? And Middleton here in Leeds, or somewhere on the outskirts of Scunthorpe, Alabama?”

“I don’t think there is a Scunthorpe in Alabama,” Sheila retorted.

Ignoring her sarcasm better than she had ignored his, he asked, “Who would want to read a book about pennies in Leeds?”

Sheila tutted and Brenda laughed derisively. “For someone obsessed with money you don’t know a lot about it, do you, Joe?”

“I know I pay you two too much of it every week,” he retorted. Concentrating on Sheila as the bus joined a long queue of traffic for the city centre, he asked, “So come on. What about these pennies.”

She licked her lips and Joe sensed a lesson coming on. “There were only about seven George the Fifth pennies minted in 1933. No one’s sure of the real number but the Royal Mint insists it was less than ten. Two of them were installed in the foundations of churches here in Leeds. St Marys at Hawksworth Wood, Kirkstall, and St Cross in Middleton. The Middleton Penny was stolen sometime around 1970, and in order to prevent the other one befalling the same fate, the diocese had it removed from the church foundations and put into safe keeping in a bank. A few years later, it was sold at auction to raise funds for restoration work. No one’s quite sure how much the missing penny is worth, but it’s estimated to be in the region of £100,000. As I told you, Dennis Wright is an authority on the history of rare coins, and it was the Middleton Penny that got him started.”

Passing the Brewery Wharf development on the final leg into the city centre, Joe observed, “He put together a career for tuppence.”

Sheila joined in the ribbing. “Of course he’s jealous. Even the Lazy Luncheonette cost more than tuppence.”


Enjoyed the snippet? Then read on!

A Murder for Christmas is available for download in a range of formats from Crooked Cat Books and Smashwords, and for Kindle and in paperback from Amazon US and Amazon UK.