Yes, it's again time for murder. If you haven't yet checked out my Murderous Christmas Treat #1, you should do so before you read on. Don't miss the chance to meet the amateur sleuths and discover A Murder for Christmas. Just don't forget to come back here!

This second excerpt comes from the fifth STAC Mystery, Murder at the Murder Mystery Weekend, which is set in Lincoln over the New Year. In the extract, Joe is in the bar and is talking with the lading actor in the murder mystery production, Gerry Carlin, fresh from playing one of the victims. 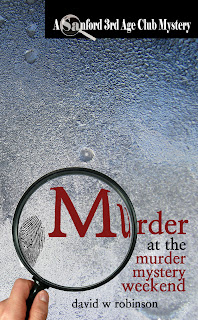 “Always been an actor, old son.” Carlin’s pride glowed through his words. “Nothing big. Rep, mainly. I’ve had a couple of speaking parts on TV, too. Ever see Inspector Hucknall?”

Joe shook his head. “I don’t watch much TV.”

“Pity. I played a serial killer in one episode.”


Ignoring the obviously ribald comment, Joe felt obliged to explain. “I run a café in Sanford. I have to be up at five thirty every morning, so I feel like a serial killer most of the time. It doesn’t leave me much time for any kind of entertainment, except when we get away on one of our weekend jaunts.” He sipped his lager again. “So is this all you do, now?”

“Occasional commercial, odd bit parts on TV, and last summer, I had to drop out of the Markham Murder Mysteries. I was cast as Davies, the old man in The Caretaker. Three week run in Leicester. Course, with rehearsals and what not, I was missing for a good deal longer than three weeks.”

“How does your wife deal with it?” Joe wanted to know. “I mean, actors are famous for, how do you say it, resting, aren’t they?”

“Not a problem, old son,” Carlin admitted. “Mrs Carlin is no longer an issue. Ran off with a kitchen salesman ten years ago.” He grinned.

Slow to realise that Carlin was taking a rise, Joe eventually smiled. “Yes, very funny. My missus cleared off to Tenerife ten years ago, too.”

“Same here. Norwich rather than Tenerife, but same principle. Mercifully, she didn’t leave with a kitchen salesman.”

From the corner of his eye, Joe caught sight of Sheila and Brenda as they came into the bar. He signalled to them. “My friends,” he explained.

“Two of them.” Carlin was impressed. “Lucky man.”

“Not as lucky as you think,” Joe said, and passed drinks from the bar to the women. “Ladies, meet Gerry Carlin, the late Colonel Haliwell. Gerry, this is Sheila Riley and Brenda Jump.”

“Ooh, a real actor,” Sheila said as she shook hands.

“Yes, but you’re dead, aren’t you?” Brenda complained. “We can’t ask you anything about the killing and Joe won’t tell us.”

Carlin half bowed and kissed the back of her hand. “Were it at all possible, my lady, I would return to the land of the living to aid you in your quest.”

Brenda giggled. “What play’s that from, then?”

Carlin frowned. “None as far as I know. It was a spot of improvisation.”

“It was very good, though,” Sheila commented, her face spelling out her admiration for Carlin. “I do appreciate thespians. I think the ability to cloak your own identity in that of other characters is a wonderful talent, and it must give you deeper insight into the human condition.”

“Er, yes,” Carlin replied. “Sadly, my dear lady, the condition of this human is starving. You’ll forgive me if I disappear to feed my face.”

“What a charming man,” Sheila commented as Carlin left them.

“I was gonna say, hot air.” He turned to the bar, quickly rolled a cigarette, and said, “Right, girls, I’m off for a smoke. If anyone wants me, I’ll be outside at the front door.”

“Anyone in particular?” Brenda called after him. “The Secretary General of the United Nations?”


If you've enjoyed this little teaser, why not try the whole novel:

Murder at the Murder Mystery Weekend is available for in a range of electronic formats from Crooked Cat Books and Smashwords, and for Kindle and in paperback from Amazon US and Amazon UK.