For Love of Sarah - Hazel Statham 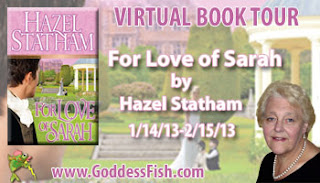 Hazel has offered some fabulous prizes - including jewellery! Tempted? Read on!

But first of all, here's Hazel telling us who inspired her writing...

Inspiring Authors of Regency Romance
When I first started writing I was influenced by authors such as the Bronte sisters, Austen and Sabatini but when I read my first Regency Romance, Regency Buck by Georgette Heyer, I knew I had found my era.  Heyer has remained my main inspiration ever since and I am never more pleased than when my writing is likened to hers.  I love her wit and humour and the ability she has to bring the romance and elegance of the period alive to her readers.  However, Regency isn’t the only era she portrays and all her books are as historically correct as she can make them whether it be The Peninsular War or the Battle of Hastings, with only a few minor errors here and there.  If I had to choose my all-time favourite hero of hers it would, undoubtedly, be Justin, Duke of Avon from These Old Shades
Published in 1847, Jane Eyre by Charlotte Bronte can’t be classed as Regency but, after Heyer, it has had the most influence on my work.  Edward Fairfax Rochester was the first hero I fell in love with between the pages of a novel and I think he has heavily influenced the heroes in my books ever since.    When Bronte created him more than 160 years ago, I wonder if she envisioned that he would still be as popular as he is today as he appeals to each new generation of readers.
Austen’s Fitzwilliam Darcy is another hero that ranks high on everyone’s list and I would have to include him as an integral part of my inspiration.  Of course, after reading literally hundreds of books over the years, many other authors inspire me to write without my being aware of their influence.  You don’t set out to knowingly emulate them, but their influence remains on a subliminal level.
No matter what the time period, as authors, we all have one aim in common, and that is to create characters our readers can relate to and care about.


For Love of Sarah
by Hazel Statham 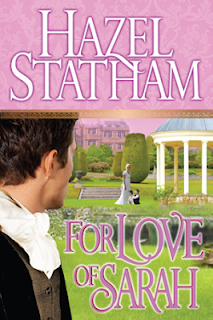 BLURB:
How many times can a heart be broken?  How many times can love be denied?  Sarah and Alexander were destined for each other but after just four short weeks of marriage, their lives were torn asunder.
Alexander, Earl of Thorne thought he had found his ideal mate but, when Sarah absconded shortly after their marriage, his world came crashing down.  Now, five years later, he discovers her in a remote Yorkshire village.
Sarah had thought she was safe, but when, severely injured in a freak accident, her husband is thrust once more into her life, she fears her dark secrets and the fact she has a son, will become known.
Despite her own desperate longings, she continually repudiates Alexander’s efforts of reconciliation. However, fate conspires against her, and when her home is made uninhabitable by floods, she and her young son are forced to accept his aid and return to her former home.
Discovery threatens and, despite her breaking heart, she plans to leave Alexander’s life.  What is this secret that makes it so imperative that she should abscond from him yet again?  Can two broken hearts cleave and emerge victorious or will life's cruel forces tear them apart forever?

Why now? Dear God, why now? After almost five years of schooling his body and mind from wanting her, the mere sight of her slight form across the crowded marketplace had brought back all the old emotions he’d worked so desperately to subdue, and he reeled with the impact.
He’d thought the stance of the young woman was familiar, as he had on numerous occasions, only to be disappointed, but when she moved into full view by the bakery stall, he immediately realized that it truly was his wife. Sarah, his senses cried, sweet, faithless Sarah. They had been wed but four weeks when she disappeared from his home and life. To find her now in a remote Yorkshire village defied all sense.
His impulse was to confront her immediately, but as he moved to tether his horse to the rail outside the smithy, the blacksmith came out to take the beast from him.
“Lost his shoe, has he, sir?” the man asked, casting an appreciative eye over the large chestnut. “Fine animal, if I might say so…”
Thrusting the reins into the smithy’s hands, Alexander Markham, Earl of Thorne, snapped, “Left side, fore,” effectively cutting short the blacksmith’s appraisal of his mount, and, turning on his heel, left the man to stare after him as he made his way into the throng of people in the marketplace.
Despite his advantage of height, he could see no sign of his wife. She had moved from the stall—but to where? Becoming frustrated with the press of people that milled around him, he strode toward the centre where the ground rose to provide a vantage point, but to no avail. Sarah was nowhere in view, and he began to doubt his own perception. 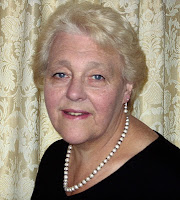 Hazel Statham began writing at the age of fifteen, finally committing to paper the stories she spun as a child. Writing has been her passion ever since, although marriage, motherhood, and career left time for little else. Once she retired, however, she was able to devote herself to writing full-time, publishing her first novel in 2007. A long time student of history, she writes mainly in the Regency and Georgian eras, though she has been known to dabble in the medieval as well. She lives in Staffordshire, England, with her husband, Terry, and their beloved yellow Labrador, Mollie.

Hazel loves to hear from her readers and promises to answer all mail.

Hazel will be awarding winner's choice of either a Cream Coin Freshwater Pearl necklace or
a digital copy of DOMINIC or HIS SHADOWED HEART (international giveaway)
to a randomly drawn commenter during the tour!

Follow the rest of the tour here for more chances to win!