March 16, 2013
Today, a wonderful writer is visiting - Jane Bwye, author of breathtaking drama Breath of Africa, newly released from Crooked Cat. Breath of Africa is a tale of life in Kenya, of love, danger and fate. And, most of all, of an incredible country.

WHAT A JOURNEY IT’S BEEN!

It all started in the early 1970’s. We’d sunk our savings into buying a mansion in the middle of a steeply sloping gum plantation in Tigoni. From the 11-acre plot you could see Nairobi on a clear day, fifteen miles to the south.

We knew we’d fill the double-storeyed house with our fast-growing family.

But the encroaching trees made everything so gloomy. And I wanted to have horses to ride with our five children over the hills and far away through the tea plantations of the Limuru highlands.

Tons of wood were chopped and stacked to stoke the roaring fires in the sitting-room, which often held hosts of children for parties and home cinema shows. Sacks of charcoal were filled and sold as the less steep land was cleared for paddocks and the debris piled up against the trees to create a barrier against erosion. Then, along the trickling stream at the foot of the valley which forked round two thirds of the property, the children discovered a gold mine. Of granadillas. Which provided us with delicious home-made juice for many seasons to come. The purple fruit, bursting with orange goodness, would literally jump into our kikapus (soft woven baskets) every season.

But I digress … the children went to school and I couldn’t spend all day hanging over the fence, watching the horses and cows, dreaming and planning the next improvement.

I’d written countless articles and several short stories. One, based on a wild and foolish school escapade, might make a promising beginning for a book. Another contained a vision of a lofty future growing out of the history of mankind’s past, and could provide a fitting end. All I had to do was devise a middle.

And so BREATH OF AFRICA was conceived. But very nearly nipped in the bud. For a whole week my mind was absorbed in writing the story. It would take me much longer than expected. And the family were beginning to complain. Meals were late, Mum’s mind was elsewhere, and she never answered questions. She even forgot to pick up somebody from school. This would not do. The typewriter was bundled back under its cover, and my notes hidden away in an untidy file. There is a time for everything…

… Until we moved to the UK thirty years later. A gigantic, scary culture shock. Time to look back and take stock, perhaps to pick up the threads of that story? But I’d got out of practice, and a strange reluctance held me back. Somewhere, I’d packed away a pile of blue air letters from my previous life – when I’d gone to Oxford, leaving behind someone special. We’d discussed everything under the sun and had kept each other’s letters. Maybe I could sort them into chronological order, and pick out bits which could be incorporated into a novel? For I had left Oxford prematurely to return home and marry him, much to the disgust of friends and family – only for him to die in a bizarre accident less than two years later, leaving me with a six month old baby, and unaware that I was pregnant again, with what turned out to be twins.

Again, the exercise took longer than expected. And the story developed a mind of its own. Countless edits and re-writes and over seventy rejection letters later, it has finally come to fruition.

Will I feel bereft? It’s too soon to tell. Relieved, perhaps, that at last a major goal in my life has been achieved. I can put it behind me. 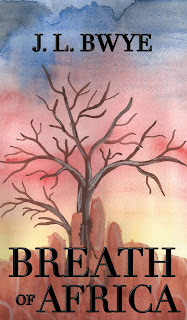 Thirty years of Kenya's recent history unfold through the lives of Caroline, a privileged woman from the fertile highlands, and Charles Ondiek, a farm labourer with dreams of an Oxford education.   Charles’s love for Teresa, daughter of a hated settler farmer, leads to a drama of psychological terror fuelled by Mau Mau oath administrator, Mwangi, who is held in detention for six years.

On his release, Mwangi forces Charles and Teresa apart, then turns his attention to Caroline. But she has inner resources, and joins with Charles to seek out a mysterious ancestral cave.

Against the backdrop of Kenya’s beautiful but hostile desert, the curse is finally broken. But when Caroline discovers the hidden reason for Mwangi’s hatred, she wonders if she'll ever, really, belong in the country she loves.

She tore her eyes away from the gaping hole before her and raised them towards the palm tree on her left. Its swaying trunk bent gently towards the grave. She looked up its ringed bark; up and up until the few green fronds swished against the blue sky. Her eyes squinted and watered at the merciless glare of the heavens, then found rest with a small white cloud.
Brian. Where are you? You know the Answer to Life, now. Can you see me here, my darling? Brian! Her heart cried out and tears welled. Brian – I love you.
Alone now.
The others were at the row of wreaths, reading the labels and standing in hushed groups. Nobody joined her at the graveside. She approached the flowers, and people started to pick them up and turn towards the mound of earth. She found a small wreath. Somebody had written on the label.
To my darling Brian, with love from Caroline and Paul.
Not alone. How silly of me. Thank God for little Paul.