Here's what Helen had to say when I quizzed her...

1) What inspired you to use tarot cards in your suspense novella?

I think the element of being able to see someone's past, present and future in the cards has always been intriguing. Having read tarot myself for a number of years, I thought wouldn't this make a great element to jump start a thriller with. I asked myself the question what if not only could the tarot reader see something terrifying about a client in the cards, but what if the client suspected she knew his secret - what then?  It was easy for me to fictionalise the tarot readings, having an understanding of their meanings,  I was able to use this in a very basic way to weave this story. So I guess my inspiration to use them initially came from the idea 'write about what you know.' ^_^

2) How did you get into tarot reading?

I have always had an interest in the mystical, magical and supernatural if you like. The tarot was just an extension of this interest. I got my first deck back in the 70s. It was the Swiss 1JJ Deck.  I still have it in its original box.  This is the only deck I had for years and years. The next deck to come into my home was Crowley's Thoth - but that's a whole different story.
I spent probably 3 years studying the tarot, spending two or more hours a day on the subject. I never grow tired of reading tarot and am still amazed at how they can get to the root of a problem.

3) What's your next writing project about?

Ah, my next writing project I am showing on my website as a serial at the moment. It's a fantasy fiction called Wizard and it's about  Micos, an apprentice sorcerer  who takes matters into his own hands to get rid of Lostan, a Dark Wizard. But to do so, he enlists the help of the wicked witch Octava. Little does Micos know that both Octava and Lostan each has something the other wants, their half of a sceptre that will make them all powerful, and both are prepared to kill to get it. Micos has in his possession a talisman the witch gave him, along with the spell to remove Lostan from his village, and she expects it to be returned. But Micos has other ideas, and he is intent on keeping it!

Who will win the battle, Lostan or Octava and will Micos live to tell the tale? 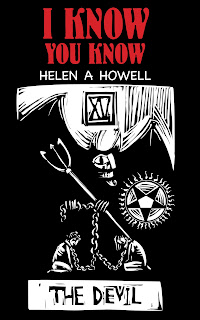 Blurb:
The darkest cards in the tarot deck reveal the darkest side of the man sitting opposite Janice—Mr. Edgar Kipp.She feigns an inability to read for him, but will he believe her?  His parting words indicate that he knows she knows he's a serial killer. And he plans to return. The voice of her dead grandmother urges her to be careful, warning Janice she might be seeing her own future in those foreboding cards. But Janice doesn't want to listen. Gran's dead. How can she possibly help her?

This is from Chapter 5  - Janice who is sitting in a café looks out of the window and spots Edgar Kipp across the road watching her - she turns away in a panic, when she looks back he's gone. - we pick up in this excerpt the same time frame from Edgar's point of view:

Edgar leaned against a wall, while he watched Janice sitting at the table in the café across the road. She’s not spotted me yet. He smiled to himself.
He had been out during his lunch break to buy some sandwiches and decided to walk up this street for a change. How lucky was it to see her in that café? I couldn’t have planned it better. He reached into his pocket where he kept the card and stroked it gently as he continued to watch her.
His lips felt dry; he wet them with his tongue. Out of all of them, she looks the most like her. He grasped the card tighter. “I should give this back,” he murmured. It would give me another chance to assess her. He squinted through his thick round glasses, trying to decide how difficult she might be to handle. The more he watched her, the more excited he became; he grew hard at the thought of what was to come. Only now did he wish he was alone with this feeling, so that he could relish and enjoy it to its climax.
Edgar pulled his grey overcoat tighter around him and released his hold on the card. I must remove my finger prints before I give it back. I was lucky to get away with the other two. That second one didn’t look right, though. This one’s perfect. Maybe I’ll be able to stop with her. Maybe she’ll be my catharsis. Edgar dropped his eyes to stare at his feet. His black shoes were polished to a mirror shine. He looked into them as images from the past emerged to fill the rounded toes. The look on their faces when they realised. They always realise too late. He returned his gaze to the shop. I will be cleansed after this one.
Edgar’s eyes met those of Janice as she stared back through the window. Does she recognise me? It amused him to think she might be scared. He watched as she turned her head away. Now’s the time to go, I think. He stood up straight and walked away whistling to himself.

Helen is a fiction writer, who writes in several genres which include fantasy, noir, horror and humour. 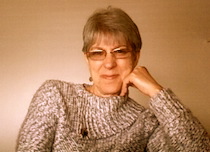 She has written several short stories, flash fictions and poems. Her work has appeared in both e-zines, anthologies and print publications. In July 2012 her debut Novella, Jumping At Shadows, a fantasy fiction for 9 years- adults, was published as an e-book. In February 2013 her Novella I Know You Know, a psychic thriller for adults, was published by Crooked Cat Publishing.
She is a member of Friday Flash Dot Org. and is a regular participant in writing Friday Flash.