The Visitor by Catriona King - promo

March 29, 2013
Congratulations to author Catriona King who today celebrates the release of The Visitor, the latest novel in a gripping new 5* crime series.

The Visitor is book three in the modern D.C.I. Craig detective series. It takes Craig and his team into a dark world of cruelty and death, in a place where people most expect to be safe. Things develop for Craig's team in good and bad ways, while Northern Ireland is stalked by a killer intent on revenge.


Blurb:
Belfast is in danger. 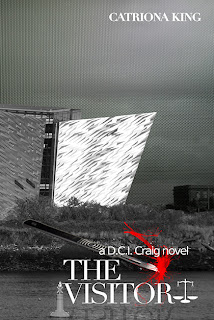 Murder in a closed Belfast world where evil goes undetected; where caring people have uncaring intentions. People should be safe in this place. They shouldn’t die unexpectedly.D.C.I. Marc Craig and his team hunt across Belfast for a psychotic killer who targets the vulnerable and leaves their children to pay. The Visitor. The third in the D.C.I. Craig detective series.


The room was in darkness when Evie woke, hearing a noise out in the corridor. She squinted at the watch her husband Brian had bought her for Christmas. Smiling at the thought of him with their new baby in two days’ time.
It was four o’clock in the morning and she was wide awake. Great. No-one had told her how boring hospitals were - her side-room felt like a prison. During the day there was company at least. But all you ever heard at night were bleeps going and babies crying. Or some poor woman screaming the place down. She was growing more grateful for Wednesday’s Caesarean by the day. She didn’t fancy a normal delivery one little bit.
She reached for the side-lamp and flicked it on, her eyes blinking as they adjusted to the glare. Then the door opened and she turned and smiled, glad of any company.
“I didn’t expect anyone at this time. Is it for more tests?”
“Just an injection.”
“Everyone here’s so clever. You all do everything, don’t you?”
Her visitor smiled, leaving the question unanswered. Evie held her arm out obediently, watching as the plunger emptied the syringe. She’d become used to the drugs and tests 24/7, and her Mum said it was rude to ask questions.
“That should take effect soon, Evie.”
“Can’t you stay and chat? I’m lonely here on my own.”
“Perhaps tomorrow.”
Evie smiled and reached for the remote, thoughtfully hitting the mute button. “Night-night then.”
An old Bruce Willis film was on Freeview. It was better than nothing. But it really didn’t matter, she wouldn’t see anything soon.
Her brown eyes closed softly and her right hand fell gently to rest, palm-up on the starched cotton cover. The remote control slipped down towards the floor, caught quickly by her visitor, just in time to keep the silence.
They held her hand calmly, curling her fingers over. And then stayed for a moment longer, leaning over the bed. Until Evie’s last breath left softly and they weren’t needed any more.


Catriona King trained as a Doctor, and as a Police Forensic Medical examiner in London where she worked for many years. She worked closely with the Metropolitan Police on many occasions. In recent years, she has returned to live in Belfast.

She has written since childhood; fiction, fact and reporting.

The Visitor is her third novel following A Limited Justice and The Grass Tattoo. It follows Detective Chief Inspector Marc Craig and his team through the streets of Northern Ireland in their hunt for a killer.

A fourth novel in the D.C.I. Craig series, The Waiting Room will be released on 31st May 2014. 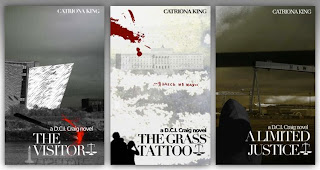