Promo Stop: The Folly at Falconbridge Hall by Maggi Andersen

May 21, 2013
I'm delighted to showcase another fabulous read by author Maggi Andersen. You might want to check out her latest release, historical romance The Folly at Falconbridge Hall. 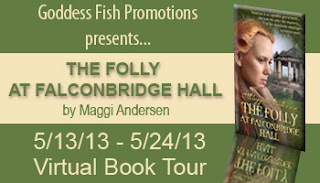 Vanessa Ashley felt herself qualified for a position as governess, until offered the position at Falconbridge Hall. 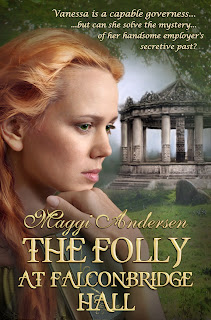 Left penniless after the deaths of her artist father and suffragette mother, Vanessa Ashley draws on her knowledge of art, politics and history to gain employment as a governess. She discovers that Julian, Lord Falconbridge, requires a governess for his ten-year-old daughter Blyth at Falconbridge Hall, a huge rambling mansion in the countryside outside London.

Lord Falconbridge is a scientist and dedicated lepidopterist who is about to embark on an extended expedition to the Amazon in search of exotic butterflies. An enigmatic man, he takes a keen interest in his daughter’s education, but Vanessa feels that he may disapprove of her modern methods.

As she prepares her young charge to enter into the modern world, Vanessa finds the girl detached and aloof. As Vanessa learns more about Falconbridge Hall, more questions arise. Why doesn’t Blythe feel safe in her own home? Why is the death of her mother, once famed society beauty Clara, never spoken of? And why did the former governess leave so suddenly without giving notice?

“Do you have a particular skill, Miss Ashley, which you can impart to my daughter?”

“No, my lord.” She drew in a breath. She had not expected such a question. “Sadly, I did not inherit my father’s artistic talent, but I have my mother’s enquiring mind and her interest in history and politics.”

“Politics?” He stared at her rather long, and she wished again that she’d had time to tidy herself. “We shall see how you get on. The rest of the day is your own. We will discuss your duties in the library tomorrow at ten. Mrs. Royce, my housekeeper, will show you to your room.” With an abstracted glance at his desk, he rose and went to pull the bell.

The mahogany desktop was completely covered with pens and papers, a microscope, a probe of some kind, a set of long-handled tweezers, a large magnifying glass and a small hand-held one, tomes stacked one on top of the other in danger of toppling, and the butterfly in its glass prison, its beautiful wings pinned down, never to soar again. Caught by its beauty and premature death, Keats’s poem Ode to a Grecian Urn, rushed into her head. “Thou, silent form, dost tease us out of thought…As doth eternity.”

The viscount swiveled, and his eyebrows shot up. “Pardon?”

Vanessa jumped to her feet as heat flooded her cheeks. She'd said the words aloud. She must have had too much sun. “Keats, my lord.”

“Are you a devotee of the Romantics?”

“Not especially.” Annoyed with herself and, irrationally, with him for pursuing it, she said, “Forgive me, it was a random thought.”

He folded his arms and studied her. “You are given to spouting random philosophical thoughts?”

She tugged at her damp collar. “Not usually. I’m a little tired, and it’s been so hot.”

Maggi Andersen and her lawyer husband are empty nesters, living in the countryside outside Sydney with their cat and the demanding wildlife. Parrots demand seed, possums fruit, ducks swim in the stream at the bottom of the garden, and the neighbors' chickens roam their yard providing wonderful eggs. She began writing adventure stories at age eight. Three children, a Bachelor of Arts degree and a Master of Arts in Creative Writing degree later, her novels are still filled with adventure and suspense, but are also passionate romances. Georgette Heyer among others, brought inspiration to her seductive Regencies and she also writes darker, Victorian novels, contemporary romantic suspense and young adult.

She supports the RSPCA (The Royal Society for the Prevention of Cruelty to animals) and animals often feature in her books.


Follow the tour for a better chance of winning: http://goddessfishpromotions.blogspot.com/2013/03/virtual-tour-folly-at-falconbridge-hall.html