Bound to the Highlander by Kate Robbins - Blog Tour

And we're back on air with a cracking hot read by Canadian author Kate Robbins. I recently had the pleasure of meeting her and her brother as they were touring Scotland. We sampled some of Edinburgh's culinary delights together. Needless to say, much food and drink was consumed during many hours spent chatting about, well, Scotland, history, Newfoundland, dogs and cats, and so much more.

So, of course, I'm thrilled to welcome Kate here! Her new release, Bound to the Highlander, is the first in the Highland Chiefs series published through the lovely folks at Tirgearr Publishing.

Take a peek and you'll know what I mean...

Book Blurb
Aileana Chattan suffers a devastating loss, then discovers she is to wed neighbouring chief 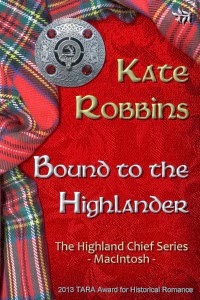 and baron, James MacIntosh—a man she despises and whose loyalty deprived her of the father she loved. Despite him and his traitorous clan, Aileana will do her duty, but she doesn't have to like it or him. But when the MacIntosh awakens something inside her so absolute and consuming, she is forced to question everything.

James MacIntosh is a nobleman torn between tradition and progress. He must make a sacrifice if he is to help Scotland move forward as a unified country. Forced to sign a marriage contract years earlier binding Lady Aileana to him, James must find a way to break it, or risk losing all—including his heart.

From the wild and rugged Highlands near Inverness to the dungeons of Edinburgh Castle, James and Aileana’s preconceptions of honour, duty and love are challenged at every adventurous turn.

Author Bio
Kate Robbins writes historical romance novels out of pure escapism and a love for all things Scottish, not to mention a life-long enjoyment of reading romance. Her journey into storytelling began with a short screenplay she wrote, directed, and produced which was screened at the 2003 Nickel Film Festival in St. John’s, Newfoundland. She has also written and directed several stage plays for youth.

Kate loves the research process and delving into secondary sources in order to give readers the most authentic historical romance possible. She has travelled to Scotland and has visited the sites described in her Highland Chiefs series.

Bound to the Highlander is the first of three books set during the early fifteenth century during the reign of James Stewart, first of his name.

Kate is the pen name of Debbie Robbins who lives in St. John’s, Newfoundland, Canada with her hubby, the man-beast, and her two awesome boys, the man-cubs.

Excerpt
The early morning mist was refreshing as she walked along the well-beaten
road leading north toward Inverness. The fog lifted just enough to expose the
stunning landscape. Out here, with the rolling green hills and explosions of colour,
she could spread her arms wide and feel free from the pain gripping her. The
tightness in her chest eased. In the distance, the sharp mountain peaks protruded
from the crawling mist towards the blue sky. The day would be lovely when the fog
burned off.

Aileana reached the crossroads and turned right, following a smaller path
leading east. Thick brush and oak trees framed the path, often giving way to vast
farmlands that lay beyond. Littered here and there were bluebells, lady fingers, and
cowslip. She knelt to collect some, pausing to inhale their sweet scent.

The flowers brought back memories of the many times her uncle had brought
them to her. Widowed and with no children of his own, he took guardianship of
Aileana after her father’s death and came to love and treat her as if she were his
own. All these years, they had only each other and she was lost without him.

Her hair prickled at her nape. She stepped onto the road and looked both
ways, her arms full of flowers. The thunder of hooves reached her ears at about the
same time her peripheral vision caught a flash of something white and very large
coming around the bend just ahead. She leapt out of the way to avoid being
trampled, landing on her backside. She strained her neck and viewed the largest
horse she’d ever seen. The dense fog had prevented her from seeing the horse or its
rider approaching at top speed. She was lucky to have avoided serious injury.

Aileana’s heart raced. She should have known better than to walk alone,
considering all the recent raids. Was the rider friend or foe? She recognized a small
path across the road. If she could get around the giant beast before the rider saw
her, she could slip through the trees undetected.

Within a split second, however, the rider dismounted and held out his large
hand. His deep chuckle made her cheeks burn.

“I’m sorry, lass. I didn’t expect to see anyone out at this hour, nor this far from
any dwelling.”

The tall man took in her appearance, his sweeping glance resting on the
embroidered stitching of her low neckline. His gaze lingered there before travelling
up her throat. She held her breath as his eyes trailed over her body.

“You can ride with me if you like.” His husky voice conjured images of silk
sweeping across her flesh.

She was entranced by the sight of him. Thick muscles flexed beneath a dark
leather jerkin which ended just above his knee and was secured at his waist with a
broad belt. In his current position, she could see his thigh muscle tense and her face
grew hotter. His plaid covered one shoulder and ran underneath his sword arm
secured by a large silver brooch offset with rubies and centered with a wildcat.
MacIntosh.

They supported the king. It wasn’t well known, but Uncle had speculated to
those he trusted. Anyone who supported a man who pawned his people like cattle
for his personal gain was no friend of hers.

It was clear from his inappropriate suggestion, she was better off not knowing
him. He was no gentleman, despite his expensive accessory and giant horse. No
decent man would speak that way to a lady. Couldn’t he tell by the way she was
dressed that she was no common wench? Then again, it would not matter to this
base sort of man. Either way, without a chaperone, she was not about to remain in
his company for one more second. His hand hung in mid-air, but she ignored it,
hoisting herself instead off the cold ground.

She mustered the most authoritative voice she could. “No thank you.” Aileana
lifted her chin and walked away.

“Wait lass. I’m sorry to have startled you. What are you called?”

Aileana turned on her heel intent to put this rogue in his place and ran into his
chest. She gasped. The thick, rich scent of leather enveloped her, sending an
unexpected shiver down her spine. She stumbled, but he was quick enough to catch
her by the arms before she fell. Her hands splayed flat against his chest. Bulging
muscles underneath his jerkin begged her fingers to stroke their curve.

His bright green eyes bore into hers. While his long brown hair was tied at his
nape, a few strands had broken free and fell loose across his face. She fought the
irresistible urge to reach up and tuck them behind his ear.

His deep voice was warm honey on her flesh. He smelled of sweet ale and
she was transfixed by his mouth which curved in all the right ways.
“Perhaps you’re a faerie come to steal me away.”

His raspy voice made her skin tingle.

“I bet you taste as delicious as you smell.”

Aileana pushed against his chest. He pushed back. The stranger pulled her
forward, his mouth now no more than an inch from hers. His hard body pressed
against hers, spreading heat to her very core.

His fingers brushed the side of her mouth and his lips parted. Her knees
trembled. His intent was clear and their proximity was inappropriate.