A sad farewell...and a new beginning

Seven weeks ago marked the end of an era in our household – we lost our beloved cat, Bob. We were distraught.

Rewind 9 years. In August 2004, hubby and I moved together into a mews cottage in Cardiff's oldest part, Llandaff. Along we brought my then 11 year old cat, Gizmo.

As Giz was used to cat company, and had been jealous and lonely, we brought Tiger home a couple of weeks after the move. Tiger was then barely 8 weeks old, a playful little kitten. But this time, Giz wasn't happy, and during his first outing, he vanished. Hubby saw him later that night, called out, and Giz turned to him, then turned away and off he went on his way. Posters went up, we called rescue centres, but no black and white male cat was found, alive or dead. A very sad time.

By November, we'd given up hope, when I spotted an ad for a black and white cat found by a colleague. She'd fed him in her garden shed but he kept going after her female cats. She brought him into work one day. Sadly, it wasn't Gizmo, but we couldn't turn him away. A scared, aggressive and raggedy-looking boy of about 3 years old. Hubby named him Bob.

That's how Bob ended up with us. His initial male cat aggression was cut short soon by the vet's scalpel. Over the years, he became more like a lapdog, so focused on hubby and me. And after the move to Edinburgh, he still stayed around the house, never venturing far for fear he'd be kicked out. He turned into the most affectionate and loyal cat, a quirky character yet a deep thinker at the same time.

When Bob's teeth caused him pain in September, we took him to the vet's who was concerned about a growth above his sore teeth. A week – and a dose of antibiotics – later, he had his dental op. The vet didn't dare take a sample of the growth as he didn't want to aggravate it, but told us to be concerned. At first, Bob seemed to recover, even taking food, but after several days, he stopped eating, even though his gums were healing, his breathing grew more ragged. A follow-up visit confirmed the worst. Bob had lung cancer.

On Monday, 14th October 2013, we had to send Bob to sleep. I cradled his head and looked into his eyes whilst hubby stroked him when the vet gave him the final jab. I'm crying just writing about it. Time hasn't been a healer just yet. 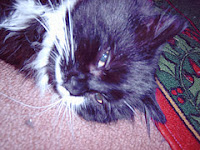 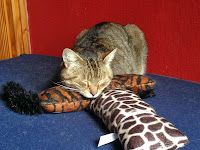 Although Bob sometimes bullied him, Tiger loved his brother and kept searching for him, and he felt lonely when we left him for work. He grew quieter, yet more confident. Sad, but also more cuddly.

But as it's not fair leaving a cat home alone for hours, we thought about getting him a companion closer to Christmas, when we're home. But we kept an eye on local rescue centres, just in case.

Then, just over a week ago, we spotted a lovely 1 1/2 year old black cat called Toby at the local SSPCA, who'd been at their centre for 5 long months! When we went to see him on Saturday 23rd November, we were told why he'd been there (a flea allergy causing a skin condition, and people not being keen on black pets) and found him a lovely, sweet-natured boy.

Bang went our idea of waiting, and two days ago we went to collect Toby. :-)

For the last 50+ hours, we have kept the boys apart, but gave them the occasional view of each other. We swapped blankets and food bowls to give each the other's scent. And this afternoon, for the first time, we had both with us in one room. Still wary (Tiger a bit grumpy, Toby appeasing), and by no means perfect, but it's a start.

Bob is still sorely missed. He played a huge part in our lives, made friends and family members smile, as he knew how to play humans; he loved snoozes in the sunshine or by the fire, and usually got the best tidbits. He's now resting in a wonderful pet cemetery in rural Fife, watching the sun rise over the Firth of Forth every morning, and probably has taken over control of the place, keeping fellow sadly departed cats & kittens, dogs tall and small and rabbits to play according to his tune. And not forgetting the living animals – horses and sheep, deer and squirrels – in the fields. We'll miss him forever.

Welcome, Toby! We're looking forward to your sharing your adventures with Tiger and us... 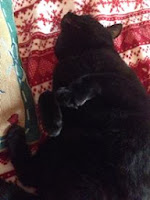