January 15, 2014
Today, I'm delighted to welcome another fabulous author, PJ Schnyder, through Buy the Book Tours. She chats about character inspiration for her latest release, Fighting Kat. She also offers some lovely gifts, so read on! 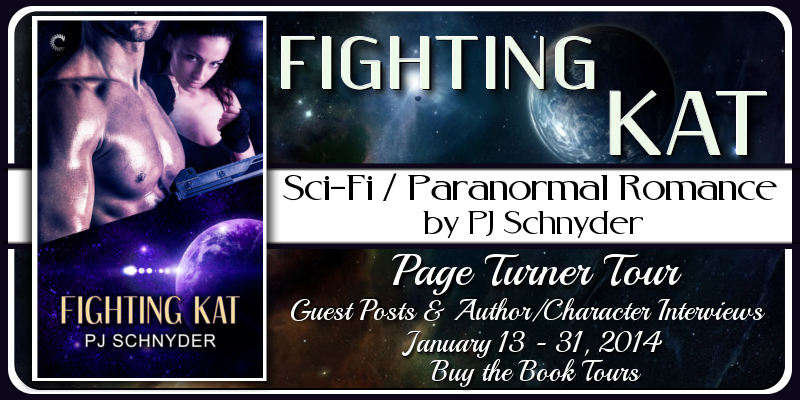 I’m often asked if I write the people I know into my books. In fact, several who’ve had a chance to read the advanced copy of Fighting Kat said they thought of me and my boyfriend, Matt/“itsOrD”.

Fun Fact: The Triton Experiment series began with Hunting Kat, which was written and published by Carina Press prior to my having met Matt. So Kaitlyn and Rygard are not me and my boyfriend.

My characters are inspired by bits and pieces of interactions though, from every person I encounter. A snippet of conversation, a facial expression, a funny anecdote…those are captured in my stories. Usually, I use those little snippets to give a character life and personality. I use favorite phrases, funny habits, and little idiosyncrasies to give depth and that extra spark to a character. Sometimes the snippets add to the overall story arc as well, but usually they lend towards character building.

In the course of creating my characters in Fighting Kat, I fell in love with many of them. I hope my readers do to.

Book two of The Triton Experiment
Intergalactic mercenary Kat Darah has been ordered to keep her shape-shifting ability a secret from everyone but those closest to her, for her own safety. She’s learned how to control the feral rage…for the most part. But when Lieutenant Rygard’s military unit goes missing, she’ll use every skill she has to find her man.
Lt. Christopher Rygard has witnessed his girl shift, and he still wants her. After Kat rescues him from alien clutches, he’d like nothing more than to wrap her in his arms again, but his first duty is to his men. And half of them have been shipped off-planet to be sold as slaves.
Kat and Rygard will need to form a new team to go deep undercover, posing as gladiators and learning to fight together in order to survive. In the arena, it’s all about who is the strongest predator…
See how it all began in Hunting Kat.
83,000 words
Buy Links: Barnes & Noble and Amazon
Chapter One
“Unless you are burnt, broken or bleeding, take yourself out of my medical bay.” Kaitlyn didn’t bother to turn as the footsteps paused in her doorway.
“No follow up threat?” Dev’s voice surprised her. The footsteps hadn’t matched her captain’s usual swagger and the air circulation carried scent up and away too quickly for it to reach her. Considering the multitude of aromas her enhanced sense of smell forced upon her when someone appeared in her doorway, usually shot and bleeding or in some stage of infection, the powerful circulation could be a blessing.
Even if it did allow her captain to surprise her. She didn’t turn away from the observation window. “The only people on board are crew. They all know I won’t hesitate to tear a man apart, even if I do have to put him back together again.”
They’d seen her do it. Course, it hadn’t been a crew member and that particular fugitive had tried to kill her. The bounty on the man required him alive so she’d still had to stitch him up afterward.
“Convenient, you being ship’s medic and all.” Dev stepped into her space anyway. “Course, this is my ship and I am captain, so I could make the point that it’s my medical bay and you are one of my crew.”
“You could.” But it’d be for a reason. Her captain didn’t play territory games without one. With her, territory meant a lot more than the average humanoid. Still, she had human logic, she could use it. “In response to your hypothetical point, I’d say you gave me this position when I became part of your crew and thus ceded this territory. Still my facility and personal space. Besides, you put in this window specifically for me.”
“We had a particularly good haul from before I got that installed, made a fair chunk of cred from almost dying. Made sense to invest it in the ship.”
She raised an eyebrow and watched his reflection in the window.
“Modification to the hull of a spaceship never comes cheap and a window isn’t an upgrade to the ship’s structural integrity unless you invested in extremely high quality materials.”
“Which I did.”
“It’s got a perch perfect for sitting and staring out into whatever.” She turned from the window and let her legs dangle over the edge as she faced him. “Too high for any normal human to get up here and enjoy.”
And she needed this space, needed this window. The view into infinity eased the pent up frustration of the beast within. Lately, she needed peace however she could find it. The panther aspect of her lurked restless and irritable beneath her skin. Ready to break loose.
Planting her hands on the ledge, she hopped off for a drop of several meters, landing on her feet with ease. The distance was farther than a human would willingly jump too. She hadn’t had to worry about that for almost four years now.
Straightening, she looked her captain up and down before locking her gaze with his. The predator aspect rose in a wave as the force of her personality crashed into his. Confidence, charisma, command presence, people defined it in their own way. It wasn’t something limited by words or descriptions. It was something a person experienced, a gut reaction, in any interaction with anyone else.
Her captain had won her respect and her trust years ago, but she still tended to…no, enjoyed butting heads with him on occasion.
~~~
About the Author:
Born and raised in the North East, PJ Schnyder spent her childhood pretending to study for the SATs by reading 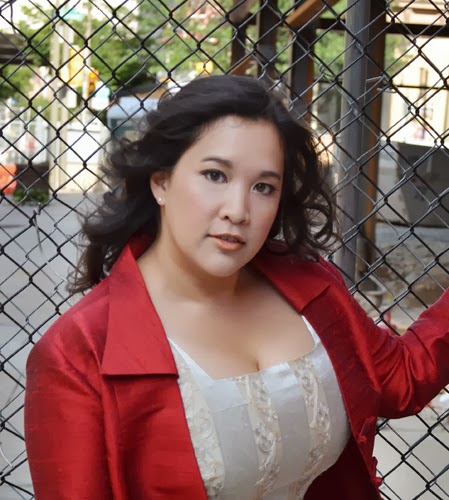 every fantasy and sci-fi novel she could borrow from the local and school libraries.

She scored fairly high in the verbal portion.
She was introduced to the wonderful world of romance a decade later by her best friend at an anime convention in Seattle.
She now lives somewhere temperate watching the seasons go by with her two dogs and super stealthy ninja kitty, writing her stories and gaming.
PJ recently received the Golden Leaf award for Bite Me, Book 1 of the London Undead Series, and is one of the contributing authors to the Parsec-award winning Tales from the Archives Vol. 2 of The Ministry of Peculiar Occurrences. In the past, she has also won honors from the Fantasy, Futuristic and Paranormal RWA PRISM awards for her novella, Hunting Kat, Book 1 of the Triton Experiment Series.
Find the PJ around the Internetz: 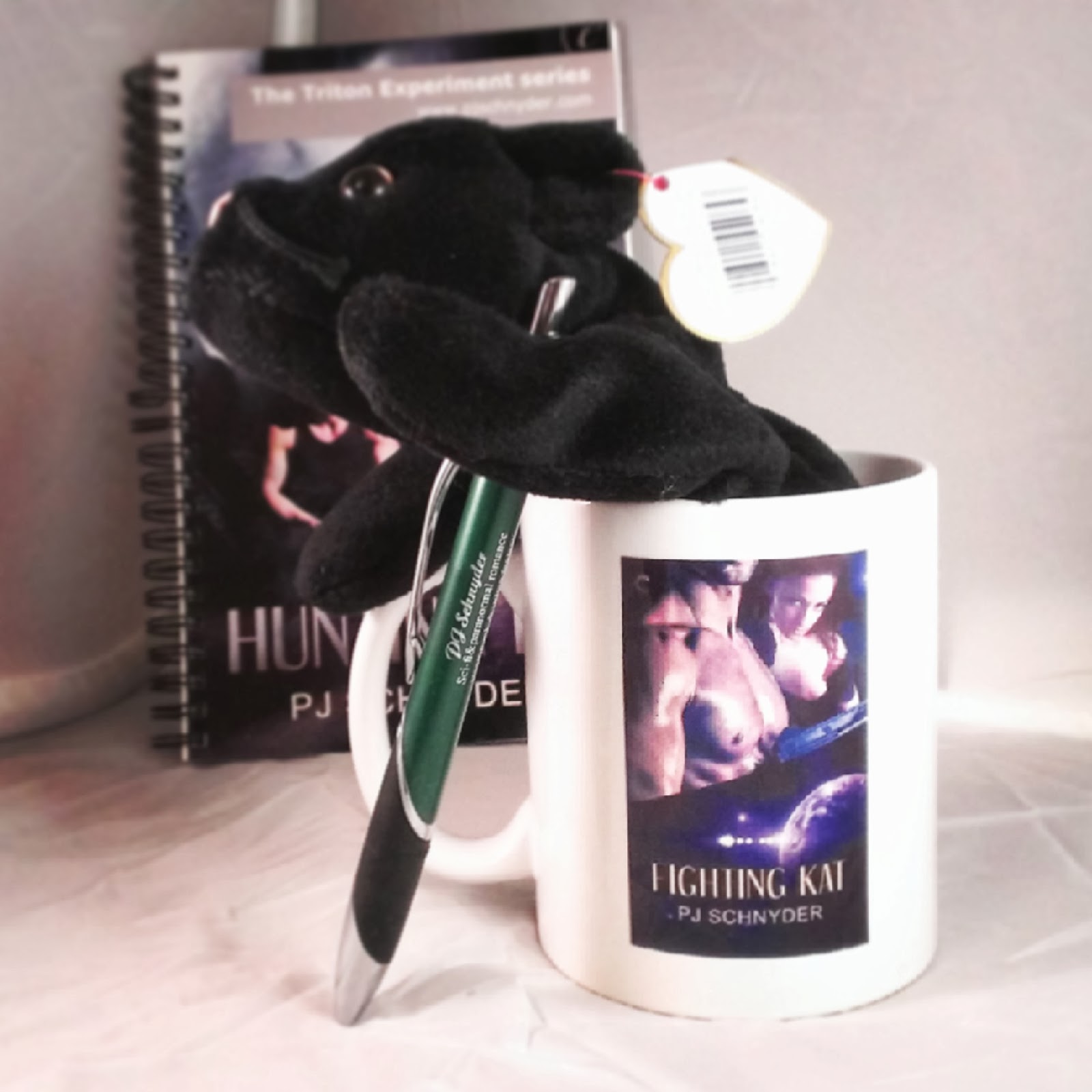