I have been tagged by author, Vanessa Couchman. Vanessa lives in France and has published a range of short stories, mostly in the much-acclaimed Writers Abroad anthologies. Her first full-length novel, The House at Zaronza, a tale of love and loss in Corsica during World War I, is due to be released on 29th July 2014 by Crooked Cat Publishing.

Right, diving it. I found it a tough one to choose between Rory Cameron, my Scottish hero in Highland Arms, or Geoffrey de Mortagne, troubled under-sheriff of Gloucestershire in  Dark Deceit.

Geoffrey won by a whisker… 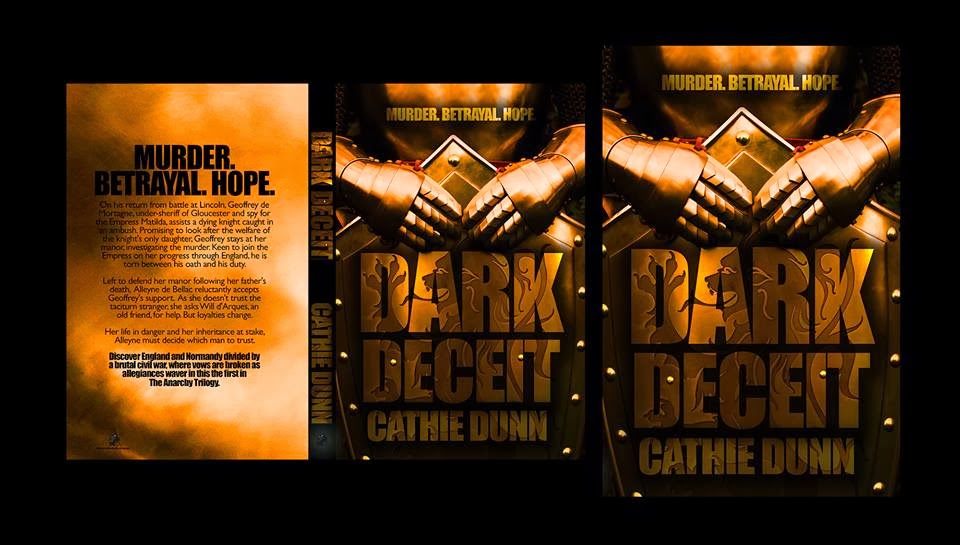 1)   What is the name of your character? Is he/she fictional or a historic person?
My male main character in Dark Deceit is Geoffrey de Mortagne. He is a fictional under-sheriff of Gloucestershire during an early English civil war also known as The Anarchy, raging between 1135-1154 between King Stephen and the Empress Matilda.

There have been real-life Geoffrey de Mortagnes, early knights in the region of Mortagne in Normandy. They are a fascinating bunch, going on Crusades and fighting the Moors in Spain, and my fictional Geoffrey is named after one of them.

2)   When and where is the story set?
Dark Deceit is set in southern England and Normandy. It begins in Gloucester in the year 1141, sees King Stephen captured as Geoffrey travels to Mortagne to his dying brother.

3)   What should we know about him/her?
Geoffrey has a chip on his shoulder. He left home in Mortagne early after his father had destined him for the Church, He goes into service to become a knight, then heads to England where he becomes under-sheriff of Gloucestershire. He works as a spy for the Sheriff – and the Empress – on the side, something very few are aware of.

4)   What is the main conflict? What messes up his/her life?
When he comes across an ambushed knight on his return from the Battle of Lincoln, he gets involved in the affairs of the knight’s daughter on his death. She distracts him from his duties, and he is keen to see her safe. To that effect, he takes her to Normandy with him.

5)   What is the personal goal of the character?
Geoffrey wants to lead his life without any complication. Ignoring his brother for years, he is now forced to seek reconciliation. Reluctantly!
His goals shift from pure politics, being the eyes and ears of the Empress, to resolve his family life. But then, he discovers more secrets…

6)   Is there a working title for this novel, and can we read more about it?
Dark Deceit is the first in The Anarchy Trilogy, with a sequel currently being at planning stage. Find out more about Dark Deceit here.

7)   When can we expect the book to be published?
Dark Deceit was published in 2012, with a sequel hopefully coming out in early 2015. Geoffrey’s adventures during The Anarchy aren’t over yet, as he delves further into supporting the Count of Anjou against King Stephen.

Dark Deceit is available as ebook and in paperback on a range of outlets, including Amazon.

So, now I’m going to tag multi-published author, Nancy Jardine, to next week’s historical My Main Character challenge. Nancy writes historical romantic adventure and contemporary romantic fiction. Her novels have been published by The Wild Rose Press and Crooked Cat.

Nancy is a finalist for The People’s Book Prize 2014 with her romantic mystery, Topaz Eyes. Keep your paws crossed for her! :-)