October 01, 2014
Today, I welcome author Rosanne Bittner, whose latest release, Desperate Hearts, is out now. Rosanne chats about reading and writing - she's on to her 60th novel! That's got your interest, hasn't it?! 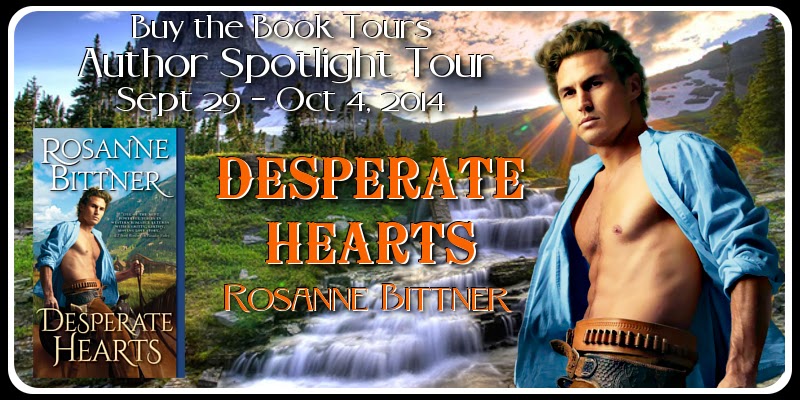 I am always happy to visit other blogs related to romance writing and reading, something we all love!  I hope you will pick up a copy of my September (2014) book, DESPERATE HEARTS, a great “wild-west” action romance set in the little gold town of Alder, Montana.  I know you will love the hero, Mitch Brady, a vigilante who is tough on the outside but so caring on the inside.  Mitch can be a ruthless, unforgiving lawman when it comes to men who harm others for no good reason, especially those who harm women, but on the inside he just wants to love and be loved and find a woman with whom he can finally settle.  Along comes heroine Elizabeth Wainright, who arrives in Alder under mysterious circumstances.  Beautiful and alone, Mitch decides he needs to watch out for this young woman who has managed to grab at his heart.  He wants her for himself, but little does he know that Elizabeth is running from the law and a cruel relative back in New York City!  Through the story Elizabeth has to learn to trust Mitch, and he in turn has to learn the truth about this woman with whom he’s fallen in love.
DESPERATE HEARTS is my 59th published novel.  I’ve been writing over 30 years and have won numerous writing awards.  Most of my books are about America’s Old West of the 1800’s, an era of unbelievable growth in America, and packed with food for plot, from the building of the Transcontinental Railroad to the discovery of gold, the settlement of endless untamed country, battles with Native Americans (and I’ve written stories about the history of Native Americans, told mostly from their point of view), the Mexican War, and even the Civil War touched on the West.  I have also written about the French & Indian Wars, the Revolutionary War, the War of 1812, and border wars that took place between states before the breakout of the Civil War.  My goal has always been to relate real American history through fictitious characters in an exciting way, and from reader feedback I receive, I know I have accomplished that goal.
I have lived in southwest Michigan my whole life.  It’s a beautiful state, and we are only about 10 minutes from Lake Michigan, one of the 7 wonders of the world.  Yes, there is a lot to be said for Michigan, but for some reason my heart has always been “out West.”  Maybe it’s because I grew up on TV westerns and lots of western movies and western heroes like John Wayne and Clint Eastwood.  All I ever wanted to read was books about pioneers and Indians.  If not for all my family being here and helping run a family business here, I would love to be living out in the Rockies.  Instead, my husband and I have traveled the west extensively for about 30 years, and I have visited every place I’ve written about.  I can tell that my love for American history and America’s West shines through in my stories, because so many readers tell me they feel like they were “right there” in my stories and that the characters seem so real.
The first book I remember reading that truly made me want to write about pioneers is A LANTERN IN HER HAND by Bess Streeter Aldrich.  It’s the story of a woman who gave up all her own dreams of being an artist and a singer to go settle in Nebraska with her husband, following his dreams of becoming a big landowner and farmer, rather than following her own dreams.  When they settle in Nebraska, there is absolutely nothing there and no  close neighbors, and this book really hits deeply at the heart with how lonely pioneer women were when having to live in such remote areas.  It’s just a beautiful story that is unforgettable.  I was 14 when I read that book, and it has stayed with me all these years.
I hope you will pick up DESPERATE HEARTS and let me know what you think – and watch for my 60th book next July – DO NOT FORSAKE ME.  It’s a sequel to OUTLAW HEARTS, and a fabulous love story – the saga of a wanted man and the woman who becomes his rock and his strength, and who teaches this man what love is all about.  DO NOT FORSAKE ME is a gritty, sometimes hard-to-read western that depicts the depths of love between a man and a woman who have to face danger and demons together.  The demons are things from Jake’s past that have haunted him all his life, and which he finally faces in DO NOT FORSAKE ME. You won’t want to miss this story, coming from Sourcebooks, with gorgeous, sweeping covers by Jon Paul!
Thanks again, and happy reading!

Thank you, Rosanne, for such a fascinating post. Many congratulations on reaching such an impressive milestone – 60 books! A fab reason to celebrate. :-)


SHE’S A WOMAN WITH A SECRET 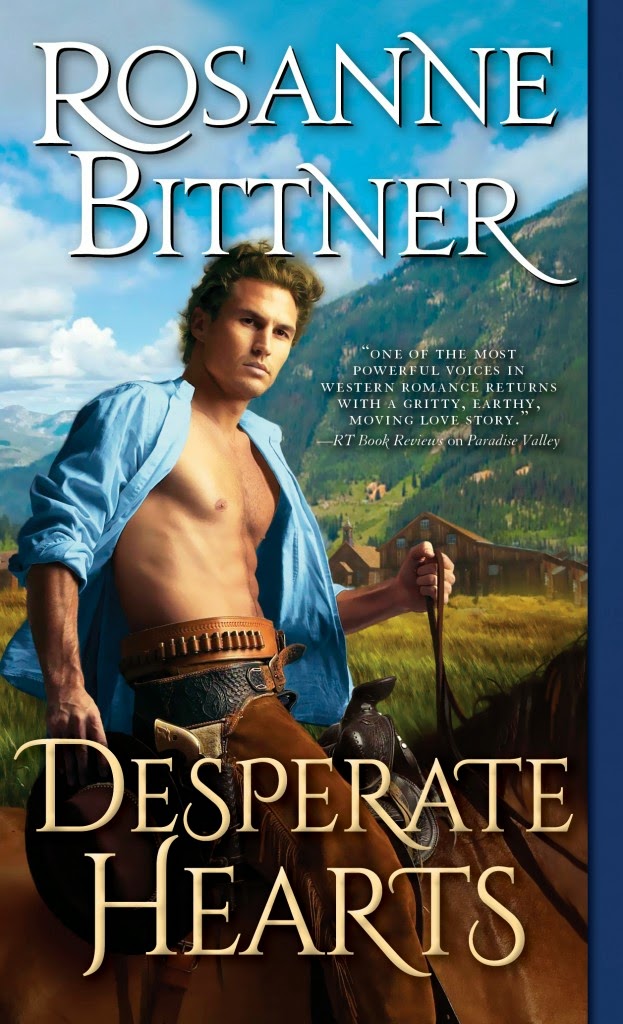 Elizabeth Wainwright is on the run. Accused of a murder she didn’t commit, she has no choice but to cut ties with her old life and flee West. The last thing she wants is attention, but when her stagecoach is attacked, she suddenly finds herself under the fierce protection of one of Montana’s famed vigilantes…whether she likes it or not.
HE’S A MAN WITH A CODE
Lawman Mitch Brady is sworn to uphold justice in the wild lands of 1860’s Montana. He’s never met a man he’s feared, and he’s never met a woman more desperately in need of his help. Something’s shaken the secretive Elizabeth, but as he gets to know the beautiful city belle, he finds the only thing he wants more than her safety…is her trust.
Buy Links: 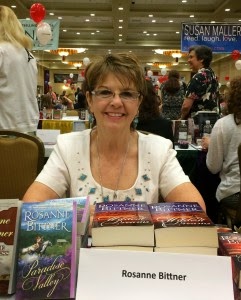 Click on the banner for more blog tour dates and information about Rosanne!