May 13, 2015
Are you suffering from the absence of Poldark? Do you miss Cornwall and its handsome hero? I might have something for you.

Silent Deception, a paranormal Victorian novella, is set in the beautiful, wind-swept county. So, take the beautiful Cornish countryside; an isolated, haunted manor; a young, headstrong heiress; and a handsome earl keen to uncover a family secret. You will discover a light, easy (though a little spooky) read for a cosy night in. 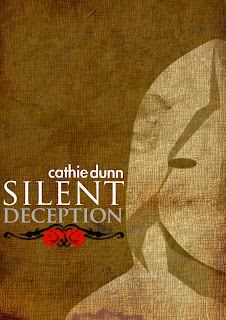 Can a ghost scare off a young heiress determined to make her new manor her home?

Having inherited a family estate she’d never heard of, Minerva Goodridge travels to Cornwall to take charge of her new home. But fatal memories lurk in the shadows of Trekellis Manor. As the locals keep away from the house, Minnie accepts the help of a stranger. Can she trust him?

Gideon Drake, 8th Earl of Rothdale, is on a mission to uncover a family secret linked to Trekellis Manor. But the arrival of Minerva, the new owner, disrupts his investigation. Attracted to the headstrong heiress, he decides to take action – and ends up uncovering more than he expected.

Gideon must weigh up his family’s reputation against Minnie’s, but will the revelations tear them apart?

Mr. Drake’s words reverberated through Minnie’s mind as she pulled off the crochet cover, shook it gently out of the window and folded it carefully. Was the manor really haunted? Placing the cover on the chaise longue, she grabbed the first of four pillows–once plumped up, now flat.
A sudden bang made her jump. “My God!” Her hands trembled, her heart drumming in her ears, before common sense took hold, and she gripped the pillow firmly.
Mr. Drake was somewhere in the house and it was blowing a gale, a natural explanation for slamming doors. Still, goosebumps rose on her arms. She rubbed them vigorously, ridding herself of any superstitious thoughts. A house was made of solid walls, floors and windows. It couldn’t be haunted. Humans died. They were buried. That was the end of it.
They didn’t linger.
Her gaze fell onto the portrait opposite the bed, now illuminated by the afternoon sun, and Minnie pondered, the pillow forgotten. She cocked her head, taking in the delicate beauty of the young blonde woman, her carefree expression, her expensive gown with its laced hem and soft layers. A hint of sadness in those deep blue eyes evoked her sympathy. Was this Henrietta Walker? The lady who had vanished; supposedly pushed over the cliffs by her husband? Minnie stepped closer but found no inscription. No name, not even of the artist. Yet, this vibrant canvas was of a high quality. How unusual.
Shaking her head, she shrugged off her suspicions. If this was indeed Henrietta, she’d later say a prayer and light a candle for her soul. But first, Minnie had to make this room habitable. Once the whole house was sparkling and as new, she could unravel the past.
“The study...”
“Pardon?” Minnie turned sharply, but the room was empty. “Mr. Drake?” Her whisper went unanswered. Silence but for the wind whooshing through the open windows. A shiver ran down her spine. She shrugged it off. Most likely, her mind was overwrought, tired from the long journey and the excitement.
With renewed effort, Minnie stripped the bed and, plumping the pillows one by one, laid them onto one window ledge for airing. The blanket went across the other. The fresh breeze would soon take away the smells.
She dumped the pile of threadbare linens in a corner. Later, once Mr. Drake was gone, she’d drag the lot downstairs. Certainly, a village such as this had laundry women?
“Talking of Mr. Drake, where is the man?” Voicing her thoughts out loud soothed her nerves. She went to the stairs. The house was quiet. At the bottom, she spotted her portmanteau. “Ahh, wonderful.” Picking up her skirts, she hurried downstairs. In her eagerness to open her trunk, she had to fiddle with the straps, but she finally managed to shove the lid off with a thump.
“Oh, there you are.”
Minnie shrieked, and turned quickly.