July 31, 2015
I'm trying to ignore the miserable Scottish summer. If you are too, I might have some fabulous reads for you...

Dark Deceit, my romantic medieval murder mystery, is featured on Crooked Cat Books this week, together with two other intriguing (and highly recommended!) novels. It's also available at 99p/c for the duration.

Originally entitled, A Norman Legacy, Dark Deceit began life at a South Wales train station during a time when I was active in a medieval re-enactment group which gave me great insight into life 'back then'.

Having visited the rolling Gloucestershire countryside, I spotted a tiny hamlet with a small Norman church. It was perfect for the setting of Bellac Manor. And on a holiday in Normandy, I found the real 'home' for the story, the picturesque area of Perche, then a county in its own right, but as part of the duchy of Normandy.

In the 1140s, England and Normandy were wrecked by two rivals to the English throne, Stephen – who had claimed the crown on the death of Henry I – and Matilda, Henry's daughter and intended heir to the kingdom (and formerly Empress of the Holy Roman Empire until her husband's death). Although Stephen was crowned, he could not enjoy his new status for long, as Matilda and her half-brother, Robert earl of Gloucester made his life very difficult. Now, Gloucester would've made a great king, but was one of Henry's 20 illegitimate children. So instead, he rose in support for his sister.

And so the civil war started, with supporters at time switching sides quicker than the wind. The people suffered as crops were burned, hamlets destroyed and castles besieged. And each man looked out for himself, first and foremost.

Such a man is Will d'Arques, nemesis of Geoffrey and Alleyne in Dark Deceit. Clever, charming, and utterly ruthless. But more about all the characters later... 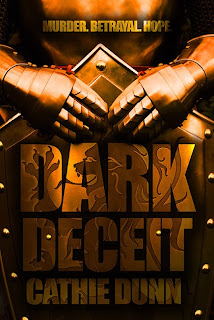 On his return from battle at Lincoln, Geoffrey de Mortagne, under-sheriff of Gloucester and spy for the Empress Matilda, assists a dying knight caught in an ambush. Promising to look after the welfare of the knight’s only daughter, Geoffrey stays at her manor, investigating the murder. Keen to join the Empress on her progress through England, he is torn between his oath and his duty.

Left to defend her manor following her father’s death, Alleyne de Bellac reluctantly accepts Geoffrey’s support. As she doesn’t trust the taciturn stranger, she asks Will d’Arques, an old friend, for help. But loyalties change. Her life in danger and her inheritance at stake, Alleyne must decide which man to trust.

Discover England and Normandy divided by a brutal civil war, where vows are broken as allegiances waver.

Dark Deceit is available in ebook and paperback formats: