September 27, 2015
Today, I'm extending a warm welcome to author Miriam Drori, who tells us about Jerusalem, the city she now calls home. It's also where her romance, Neither Here Nor There, is set. I'm intrigued!

Let's see what Miriam has to say...

Having the heroine come from the haredi community ticked all the boxes. It also made for an interesting topic – one that I was keen to explore. What better place to set my story than Jerusalem, my home town, where I see people from the haredi community every time I leave my house? Sorted, or was it?
I wasn’t sure about setting the novel in my home town. Writers often prefer to describe places further away from them, because that gives them a perspective that’s hard to gain in a place they see every day. But I think Jerusalem is such a special place that it can never become mundane, however long you live here.

Also, I had always refrained from setting a story in Jerusalem, or anywhere in Israel. I felt that readers expected any story set in Israel to involve terrorism and the ongoing struggles with our neighbours. I wasn’t sure anyone would want to read a story that didn’t mention this. I wasn’t sure readers familiar with our part of the world only through the news media would believe that there is life outside all the conflict. 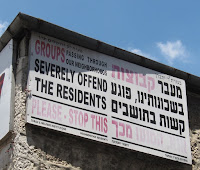 Despite this explicit and distinctive setting, I wanted my story to be relevant to readers anywhere in the world. My heroine, Esty, happened to grow up in the haredi world in Jerusalem. But a lot of her experiences could parallel those of anyone who had been brought up in a sect, closed off from the outside world.

It’s also no coincidence that my main characters visit London. This was the city where I was born and grew up. For the novel, I had to picture London for someone visiting this vast metropolis for the first time. As I haven’t lived there for ever so long, this wasn’t hard to do.

When I finished the novel, I still wasn’t sure how readers would react to it. I knew there would be some antagonism because, while I don’t denigrate the haredi community, of my two main characters, one has left it and the other is outside it, so naturally both are not completely in favour of that way of life.

Having received praise from my beta readers and later from many other readers, I think my novel works. Many have learnt a lot from it while enjoying what is essentially a light romance. Others have appreciated reading a story with a familiar background. And I got to wander around my beautiful town and see it through new eyes.
~~~ 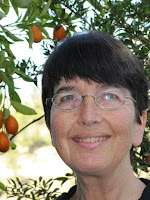 Miriam Drori left London at the age of twenty-three and lived briefly in the south and the north of Israel before marrying and settling down in Jerusalem to raise two sons and a daughter. Following professions in computer programming and technical writing, she now spends her time writing creatively and editing.

Miriam began writing in order to raise awareness of social anxiety. Since then, the scope of her writing has widened, but she has never lost sight of her original goal.
~~~

Neither Here Nor There: a romance with a difference 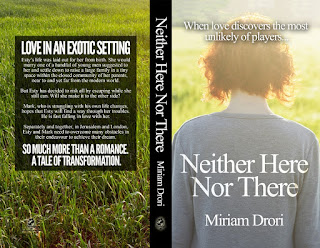