October 12, 2015
Today, I'm delighted to welcome back author, Emma Rose Millar. Her rip-roaring adventure, Five Guns Blazing, is out now. Plenty of drama, passion - and pirates. Well worth checking out!


London - A Forbidden Place Full of Vice and Temptation

We were taken after the final case of the afternoon was heard, on a waggon with ten others, through the cobbled streets, past the ramshackle pie shop, the confectioners and the apothecary. The air was filled with the stench from the sewers, and from discarded oranges and pears which lay blackening on the ground. There were clamorous cries from market traders selling off the last of their wares for the day and the hollow trotting of horses’ hooves upon the stones as they pulled along carriages, in which ladies sat holding handkerchiefs to their faces. It was nearly dusk, and the girls in their gaily coloured slammerkins had already begun to appear one by one, and gather in small clusters which fell open like the petals of a primrose. One of them leaned forward to take a closer look into our ambling waggon; her breasts swelling from beneath her stays like two round dumplings. As she came closer I could see her face was scarred with pox.
(Emma Rose Millar and Kevin Allen, Five Guns Blazing) 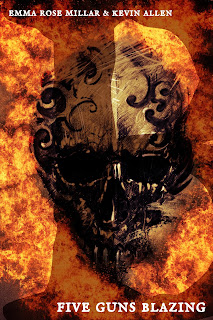 My mum’s from Kilburn in London and my grandparents lived there until I was ten. I used to love my monthly visits to places like St Paul’s Cathedral and The Tower. But eighteenth century London, with its unsavoury taverns, pickpockets and bawdy houses was a world away from the cosmopolitan city of the 1970s. Three hundred years ago London was a murky caldron of vice, whose sights and smells lend themselves wholly to vivid interpretations in historical fiction.

The Great Fire of 1666 had stolen the majority of the buildings and while many were left crumbling and falling down, the rest of the city was rebuilt in a hasty and slapdash manner and families were crammed into rooms above shops with houses being divided and then subdivided. Heavy shop signs jutted out of commercial properties on large iron bars. In high winds the signs would swing so pendulously that they could bring down the whole façade of the building down. Between the hovels and shacks was a labyrinth of stinking alleyways which concealed criminals at their every turn.

Filth ran down the cobbled streets: horse manure, raw sewage, animal guts and household waste. Cesspools collected in puddles everywhere and London was filled with the vile stench of dead dogs, cats and rodents, and to add insult to injury, in wet weather, horse drawn carriages would often splash pedestrians with putrid muck from the gutter. Bodies of those executed were sometimes gibbeted or hung in chains as a macabre warning to all, and cemeteries for the poor had open pits, deep enough to house seven tiers of coffins. They would not be filled in until the pit was full; the stench of rotting human corpses also permeated through the city’s streets.

Drinking water came directly from the Thames whose murky depths were filled with animal remains and debris from ships. As a safer alternative to water, gin shops sprang up everywhere, advertising that patrons could get ‘dead drunk’ for the sum of 2d. It was a wonder anyone survived at all! Disease, primitive medicine and food shortages meant that the mortality rate was high. Half of all children born in the early part of the century died before they reached the age of two. If they did survive, many poor children were packed off to workhouses where they were subjected to backbreaking regimes and abuse. Children would be employed in many occupations including stocking making, domestic service and as chimney sweeps or hawkers.

The population was vast and diverse and for their recreation, London offered an array of entertainment to suit every taste. For sex tourists, a guide book, Harris's List of Covent Garden Ladies (1773) told visitors where to find the best prostitutes. So called freak shows featured hermaphrodites, dwarfs, bare knuckle fighting, conjurers, quack doctors and animals who were professedly capable of fortune telling, gambling and arithmetic.
There was even an art exhibition in Fleet Street which undoubtedly would have outdone this year’s Dismaland; a complete exhibition of historical figures and horrific tableaux, all made out of wax.

With its lawlessness and its colourful characters, the underbelly of eighteenth century London society completely drew me in, immersing me in a world of thief-takers and vagabonds while I was writing Five Guns Blazing. I hope you will enjoy that seedy world as much as I did:

I thought then how strange it must have been for your whole existence, your whole world to be confined to those four walls on Florence Street, shut out from the whole city with its fogs and its sometimes orange skies over St Paul’s Cathedral, pedlars with ribbons stuffed in their coats, pickpockets, drunks, ladies that looked like whores and whores that looked like ladies. Even the view from the dormitory window was as distant and still as if it had been an oil painting hanging on the wall; Danish timber barques drifting on the river with their sails at half-mast and dockers poised ready to drag their cargo onto land. The Danish ships were a queer kind of whisper to the world outside the frame, the river and the sea which had brought them here and a peaceful far off land in the north where waterfalls froze and people spoke in foreign tongues. But there was no outside world here, just this self-contained little realm, with its own rules and doctrines, with our blue flannels and shoes that pinched.

“Have you seen it? London?” I asked him in such a covert way I may well have been asking if he had seen a ghost or a den of criminals. And that was how it seemed now I realised, like a forbidden place full of vice and temptation from which we must inexorably be shut away – for our own sakes.
~~~
Five Guns Blazing is now available from Amazon & Smashwords!