November 11, 2018
Today, I welcome historical fiction author Janet P. Reedman to My Place. She tells us a little about a town called Amesbury, in beautiful Wiltshire, England, close to the impressive site that is Stonehenge. An ancient place, there is much to discover.


Amesbury, in Wiltshire, is not the most beautiful English town or the one with the most ancient buildings. However, its history goes back into the mists of time, and it has a claim on the title of oldest permanently occupies settlement in the British Isles, with the first inhabitants living and feasting during the Mesolithic. It is the nearest town to Stonehenge, and also the burial place of a medieval Queen and a princess who had a claim on the English crown….
The main areas of interest fall on High Street and Church Street. Starting on the old High Street, you immediately notice a large white inn with a sign that reads ‘The George.’ What you see today dates from the 1500’s-1600’s, when a timber-framed building was constructed on the site. Earlier still, though, The George provided lodging for travellers to the nearby monastic houses in the reign of Henry II. General Fairfax stayed there for a night during the Civil War. It may also have been the inspiration for Charles’ Dickens’ Blue Dragon Inn in Martin Chuzzlewit. 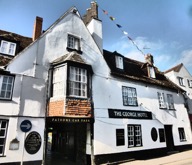 Further down the street, as it becomes Church Street, you find The Antrobus, a 17thc coaching inn. Its claim to fame is that the Beatles stayed there while filming on Salisbury Plain in the 1960s.
Now you will see the church of St Mary and St Melor rising up against a backdrop of trees on your right. You will immediately notice how large it is for a parish church. That is because it was once a monastery originally founded in 979 AD. What is visible today is all from later medieval periods.

Inside, the abbey church has some interesting carved corbels, including Jonah being swallowed by a monstrous whale, and a rare late medieval clock. A female figure depicted in a panel of surviving medieval stained glass is most likely the Virgin Mary—but has acquired the name ‘Guinevere’ due to the legend that King Arthur’s wife retired to Amesbury Abbey after the King’s death to become a nun.

Next to the church is a private drive that leads to ‘Amesbury Abbey’, nowadays a nursing home. Here was the site of Amesbury Priory, founded as a daughter house of Fontevraud by Henry II. At the same time, the Benedictine order which used the present church was dissolved.
Sadly, due to the Reformation, not one stone of Amesbury Priory now stands above ground.
Somewhere in the spacious grounds lies the lost tomb of Queen Eleanor of Provence, the wife of Henry III. The princess Eleanor of Brittany, sister to Arthur, who was likely murdered by King John, also willed her bones to Amesbury after spending most of her life in captivity. It is unclear whether her remains are in the lost priory or the abbey church, which has a Breton dedication to the boy-saint Melor, who was murdered by his wicked uncle in a similar manner to Arthur!

The grounds of Amesbury Abbey are private but there are occasional open days and archaeological work continues at the Mesolithic site of Blick Mead, which lies across the priory’s fields in the shadow of the Iron Age hillfort called Vespasian’s camp.
Following the Stonehenge road past the bridge over the River Avon and onwards up the hill you eventually come to the busy A303 and in the fields beyond rise the weathered grey monoliths of Stonehenge and the hundreds of burial mounds that surround them.

~~~
About the Author:
J.P. Reedman was born in Canada but has lived in the UK for 26 years, 12 of them in Amesbury, Wiltshire. Several of her historical novels have taken place in the Amesbury region.
Follow her here:
Blog
THE STONEHENGE SAGA
THE CAPTIVE PRINCESS: ELEANOR OF BRITTANY
MY FAIR LADY:ELEANOR OF PROVENCE

~~~
Thank you very much for this fascinating post, Janet. I've never been to Amesbury, or Stonehenge, but the site has been on my bucket list for years.
The story of Eleanor and Arthur of Brittany is so tragic. Those were perilous times.
author fiction histfic historical historical women history J.P. Reedman medieval Middle Ages queens writer