December 09, 2018
Today, I'm delighted to extend a warm welcome to historical fiction author Derek Birks, whose novels are set during the Wars of the Roses, when the Houses of York and Lancaster fought for the English throne. A fascinating era!

With that historical background in mind, Derek introduces us to the market town of Ludlow, a strategic place during those uncertain days.


Where my stories come to life: Ludlow

I discovered Ludlow during a major flood in July 2007 - the year Tewkesbury was virtually cut off by flood water and many other areas were also severely affected. One of the main roads into Ludlow was closed because the bridge had been washed away! It was not a very auspicious start to my association with the town.

Under normal circumstances, Ludlow isn’t exactly a town that makes the headlines, so why did I go there at all?

Well, I was researching my first historical novel, Feud, set in 1459 during the Wars of the Roses. Although the book starts and ends in Yorkshire, Ludlow plays a pivotal role both in the historical events of that year and in my fictional story. It’s a place in the story where important and, in some cases, lasting bonds are formed or strengthened. 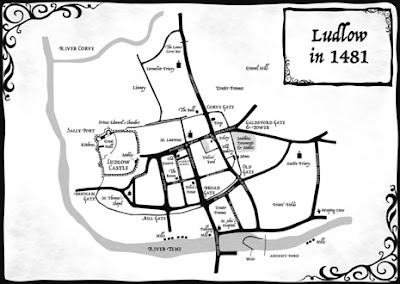 My hero, Ned Elder, arrives in the town in September 1459 with a few random followers and a badly wounded girl that he rather hopes is going to stay alive long enough for him to tell her that he rather fancies her. Circumstances have led him to join the Richard, Duke of York’s army, but things don’t go that well for York in Ludlow and the army is routed without much of a fight. As a result, the Lancastrian king’s army swarms into Ludlow and ransacks the town – an experience from which Ludlow took decades to recover. Without the need for a spoiler alert, suffice to say that my hero, pursued by a variety of villainous chaps, leaves the town – with said girl - in a hurry.

The shape of Ludlow town centre is almost unchanged since the Middle Ages and the line of the old town wall that enclosed it can be discovered with little difficulty. Thus a reader could wander around the modern town and follow where the events in the book happen – even without a map like the excellent one above of medieval Ludlow – for which I am indebted to my daughter Katie – who also designs my book covers by the way. This map was produced for a later book but a similar one exists for 1459.

Such maps I believe enhance the reader’s experience and understanding of the books. Many of the place names also have a story to tell – for example, Weeping Cross Lane, which marks a site where medieval penitents would go to seek forgiveness. The latter in particular but also Ludlow as a whole, figures quite prominently in Scars from the Past, the first book of my second series, The Craft of Kings.


When I was writing the remaining three books of the first series, entitled Rebels & Brothers, I revisited Ludlow from time to time.
Over the years my research has also taken me to areas outside the town, for example the battlefield of Mortimer’s Cross, which was fought some miles south of Ludlow. That first year I visited was, as you can imagine, very wet indeed and the conditions were not ideal for trudging around a battlefield – I even filmed some of it – not the actual battle obviously, but the site… and yes, it wasn’t so difficult to imagine defeated men at arms drowning in the nearby freezing cold River Lugg! I also visited, several times, the nearby fortified manor of Stokesay Castle which I used as a model for a similar, though fictional manor at a different site in the Corve valley.


Each time I visit Ludlow, I enjoy the place more because it is saturated with history – especially medieval history. Some buildings survive from medieval times including the castle which despite being ruined still has some magic to offer the visitor. Inside St Laurence’s church we find stained glass representations of some of the key members of the Houses of York and Tudor who had a close association with the town: Richard, Duke of York, Edward IV, Edward V and Prince Arthur Tudor.

Being able to explore the physical environment of medieval Ludlow, despite all the modern trappings and distractions, has helped me to achieve a sense of place in my novels.

Oh, and it’s also a relatively relaxed and tranquil town to visit – though it gets a little more hectic during the Beer Festival!

Derek was born in Hampshire in England but spent his teenage years in Auckland, New Zealand, where he still has strong family ties.

For many years he taught history in a secondary school but took early retirement to concentrate on writing. Apart from his writing, he spends his time gardening, travelling, walking and taking part in archaeological digs.

Derek is interested in a wide range of historical themes, but his particular favourite is the late medieval period. He produces podcasts on the Wars of the Roses for those interested in the real historical background to his books. These can be found on his website.

Derek’s fiction is action-packed and rooted in accurate history. His debut historical novel, Feud, is set in the period of the Wars of the Roses and is the first of a series entitled Rebels & Brothers which follows the fortunes of the fictional Elder family.

The fourth and final book of the series, The Last Shroud, was published in the summer of 2015 and Derek then embarked on a new Wars of the Roses series, entitled The Craft of Kings, and comprising so far: Scars from the Past andThe Blood of Princes. The latter is available in December 2018 on NetGalley for reading and review.

The Elders will return in the third book of the series, Echoes of Treason, in Spring 2019.

Thank you for visiting My Place, Derek. Sadly, I've never had the chance to explore Ludlow, but I'm now curious about your series set in this fascinating era.