January 20, 2019
Today, I'm delighted to welcome back historical fiction author DK Marley, who is telling us about a place with an intriguing name: Jekyll Island! A place full of history – and bittersweet memories!

Let's find out what it is about...

You Will Always Come Back by D. K. Marley
Jekyll Island, Georgia, U. S. A.
There is a favorite saying about Jekyll Island. Many of the locals say “You will always come back, once you step your foot on the island.” For me, this proved true, for I first set my foot upon Jekyll Island over twenty-five years ago and have returned year after year until the Fall of 2012 when I took the plunge and moved to the area. 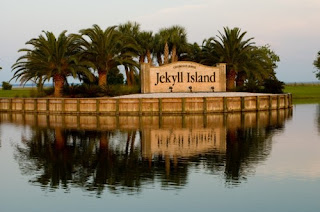 What can I say about the beauty of this place? Sometimes words fail me when I think of Jekyll. I have so many memories here. Year after year taking my kids to play at the beach, watching them splash in the waves with their little Scottie dog running after them. We would laugh and laugh as he bit the waves and rolled in the sand until he looked like a dirty little scrounger dog. We knew every inch of the island, riding our bikes down every trail, wandering through the old Victorian houses in the Millionaire's village from days of long ago, eating ice cream at the parlor near the Jekyll Island Club, gathering bags full of sand dollars, cowries and tiny conchs, and snapping hundreds of pictures of sunrises and sunsets. 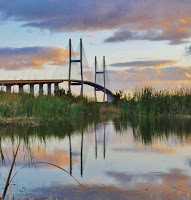 Along with the personal affection I hold for this place, the history behind the island is simply amazing. My own novel “Child of Love & Water” deals with the history during the early 1700s, when the island was still known as Ospo to the Mocama Creek Indians who used the island as a hunting ground. This was before the colonization of Georgia, but soon the sands felt the footsteps of settlers when General Oglethorpe founded the forts of Frederica on Saint Simons Island, Fort King George near Darien, and Fort Saint Andrews and the small town of Berrimacke on the island south of Jekyll called Cumberland. Jekyll Island sat in the midst, protected by this strong arm of Britain poised to drive out the Spanish southward to Saint Augustine and Captain William Horton built a brewery and plantation near the Northwestern edge of Jekyll to brew ale for the men at the nearby forts. But Jekyll saw her fair share of bloodshed and violence during those days.

When the battle of Bloody Marsh took place in 1742, the Spanish left a trail of destruction as they fled Oglethorpe's troops, scorching Horton's plantation, but it was the last battle fought between the British and Spanish for the Coastal islands of Georgia. The colony was secured and Oglethorpe returned to England with the towns of Savannah and Frederica growing and thriving. The regiment at Fort Saint Andrews moved further south on Cumberland to Fort Prince William, and the town of Berrimacke faded into history, and the Creek Indians pushed further West and North away from these foreign intruders onto their homeland. Things changed. Georgia changed, but Jekyll remained secluded and isolated, except for the DuBignon family who reestablished a homestead at the Horton place. Plantations popped up all along the coastline, the mainland city of Brunswick emerged, and slavery took hold of Georgia. Still, Jekyll remained safe and unspoiled until the early 1900s when the wealthy elite of New York, such as William Vanderbilt, J. P. Morgan, Frank Goodyear, and Joseph Pulitzer, founded the exclusive Jekyll Island Club in the early 1900s. The famous Victorian houses of many of the elite families (Vanderbilt's “Indian Mound” house, Goodyear Cottage, Moss Cottage, DuBignon House) still remain on the island as museums, bookshops, art galleries and wedding venues, to this day; as well as the turreted clubhouse, which is now a luxury hotel for the island, complete with the ambiance of those old “Gatsby” days. 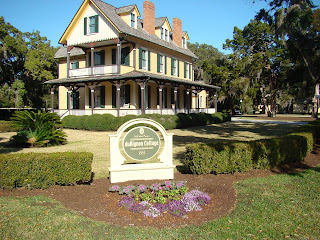 For me, there is something magical about the island. Maybe the attempt to keep the majority of the island protected from commercialism, thus when you walk the trails or wander along the beaches you know it is just the same as it was hundreds of years ago. For twenty-five years, the island was a part of our family. My son and his wife's first child, my granddaughter, was born at the hospital a few miles from the island. My daughter's fiancé proposed to her on the island. I still visit today, although sadness follows me like a shadow now.

The picture of my daughter sitting on the beach reading her favorite book, the wind tussling her curly blonde hair, and our little Scottie covered in sand, are now only memories for me. Jekyll Island was her favorite place, where she spent her childhood, where she spent her honeymoon with her husband in 2009. My husband and I moved only a mile from Jekyll, in 2012, visiting there every chance we could to soak up the magic, until the day our lives changed. A drunk driver took our daughter and her husband away from us, and two weeks later, our little Scottie closed his eyes.

I still visit the island. It still brings me back. Even the painful memories, for I pause at the bench where my son-in-law proposed to my daughter, I gaze over the spot where she splashed in the water with her little brother, I touch the ground where our sweet doggy is buried, and somehow realize that now we are part of that history of this beautiful island. I still return, time after time, year after year. I am not unique in my happiness or sadness. History before me was made here, history during my lifetime was made here, and will continue on to the horizon. I will smile and I will cry, the same as all the other people from the past and in the future who touched, and have yet to touch, their feet to these golden sands. But, just like the constant waves beating incessant against the shore, she draws me back like a healing, again and again, and will do the same for you. 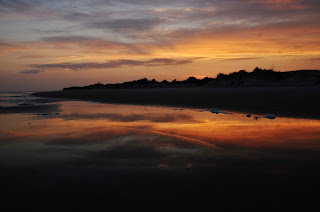 Blurb for Child of Love & Water:

The year is 1722. A child is born on the isolated island of Ospo off the Georgia coast. In the midst of General Oglethorpe's vision for this new land, and the emerging townships of Frederica and Savannah, four lives entwine together on this island like the woven fronds in a sea-grass basket - the orphaned Irish girl born free of hate or prejudice, a war-ravaged British soldier seeking forgiveness and absolution, a runaway Gullah slave girl desperate for a word of kindness on the wind, and a Creek Indian warrior searching for answers about this intrusion onto his homeland. What they learn from this wild innocent girl, and from each other, will change their lives forever.

A new birth, a new country, and the elements - Water, Wind, Fire, and Earth - entwine to teach one thing: Love conquers all. Love sees beyond borders. There is no ignorance in love. 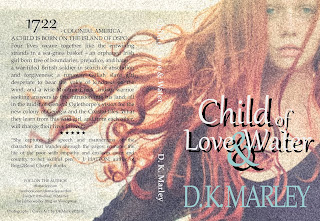 D. K. Marley is a historical fiction author and blogger specializing in Shakespearean themes in her novels. Her grandmother, an English professor, gave her a volume of Shakespeare's plays when she was eleven, inspiring DK to delve further into the rich Elizabethan language. Eleven years ago she began the research leading to the publication of her first novel "Blood and Ink," an epic tale of lost dreams, spurned love, jealousy and deception in Tudor England as the two men, William Shakespeare and Kit Marlowe, fight for one name and the famous works now known as the Shakespeare Folio.

She is a true Stratfordian (despite the topic of her novel "Blood and Ink"), a Marlowe fan, a member of the Marlowe Society, the Shakespeare Fellowship and a signer of the Declaration of Intent for the Shakespeare Authorship Debate. Her new series titled "The Fractured Shakespeare Series" will tackle adapting each play into a historical fiction novel. She has traveled to England three times for intensive research and debate workshops and is a graduate of the intense training workshop "The Writer's Retreat Workshop" founded by Gary Provost and hosted by Jason Sitzes. She is also writes for "The Jabberwocky Blog" on Wordpress. She lives in Georgia with her husband and a Scottish Terrier named Maggie. 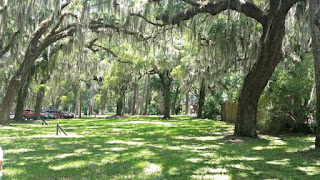