January 02, 2020
I'm so thrilled to share that I brought Dark Deceit across to Ocelot Press.

“Layered with authentic detail that will delight any historian, Dark Deceit is a well-written tale of romance, intrigue and dastardly machinations.”
~ 5* review, Suzanne Rogers, author

The novel began life at a small train station in south Wales where I lived at the time. In early 2012, it was published through Crooked Cat where it stayed until late 2019.

The sequel is as yet unfinished (I know – and I apologise for the continuing delay), but I hope to get it done (yesss!) by the summer. This coming summer, 2020, to be precise. Watch this space!

But in the meantime, if you haven't yet read Dark Deceit, maybe I can entice you to do so. Find the blurb and a teaser below!

A blend of murder mystery and romance, Dark Deceit takes you to medieval England and Normandy. The time was called the ’anarchy’ by chroniclers as the civil war between King Stephen and the Empress Matilda, designated heir to the throne, rages on for nearly two decades. A fascinating era, well worth reading more about.


Dark Deceit is available on Amazon, and *free* to read with Kindle Unlimited. 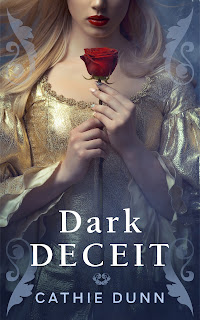 On his return from battle at Lincoln, Geoffrey de Mortagne, undersheriff of Gloucester and spy for the Empress Matilda, assists a dying knight who had been ambushed. Promising to look after the welfare of the knight’s only daughter, Geoffrey stays at her manor, investigating the murder. Keen to join the Empress on her progress through England, he is torn between his oath and his duty.
Left to defend herself and her manor following her father’s murder, Alleyne de Bellac reluctantly accepts Geoffrey’s support. But as she doesn’t trust the taciturn stranger, she asks Will d’Arques, an old friend of her father’s, for help. But loyalties change, and she is no longer able to tell truth from lie. Her life in danger and her inheritance at stake, Alleyne must decide which man to trust.


Discover England and Normandy divided by a brutal civil war, where vows are broken as men switch allegiances between two sides.

Geoffrey slid from the saddle. Winding the reins loosely around a low branch, he moved forward. The moon slid behind the clouds again and he sent up a quick prayer of thanks. As he drew nearer to the fire he crouched, mud muffling his steps. The voices became clearer. They spoke with heavy accents.
Flemish accents?
Another voice stood out – speaking with the clear intonation of a Norman lord. It sounded vaguely familiar but he could not put a name to the speaker. Cursing his luck, he crept forward. He must get closer.
Sweat trickled down his temples. His veins pumped with the thrill. Although he was used to risking his life on and off the battlefield, the rush always felt the same – exhilarating and dangerous. The pounding of his heart echoed in his ears. This was what his life was all about.
He took cover behind a large oak tree. By now, he was too close to the camp for any mistakes. Chancing a glance around the thick trunk, he saw the fire and four figures huddled around it. He made out the faces of three men, their rough, dirty mail proving him right. Mercenaries. They appeared deep into their drink, swaying and grunting. One fellow threw an ale skin to another and began imitating a stabbing motion, grinning wildly. His comrades guffawed and fell over with laughter.
Geoffrey went cold. Were they talking about Lord Raymond’s murder? He held his breath. The shouting grew louder. His skin crawled but it gave him confirmation of their origin. They were indeed Flemish mercenaries.
He turned his attention to the man sitting with his back to him, head hidden in the depth of a hood. He spoke in Norman French and held himself differently, more upright, sober. While he did not join in the hilarity, neither did he stop it.
Geoffrey was sure this Norman lord was the leader. He must catch a glimpse of the man’s face. The distinct voice still echoed through his head, vaguely familiar yet unknown. He had to take a wide circle around the camp to identify him. He crept back into the undergrowth and wound his way around another large oak trunk.


Geoffrey sensed the movement rather than saw it. His hand grabbed for his sword belt. Only it was missing. Damn! He had removed it for the funeral. His mind whirling, he dodged the blade of the axe aimed at his skull. The edge grazed his left arm. Pain seared through him.

“Readers of historical fiction will love every page of this exciting story.”
~ 5* review, Readers’ Favourite