I’m so excited to share this novel. Beathan the Brigante is the fifth in Nancy Jardine’s gripping Celtic Fervour Saga series set in Roman Britain. You have adventure, historical events, romance and drama, all in a cleverly-created historical setting.

Oh, and if you haven’t caught up with the early books in the series (which I can highly recommend), now’s your chance, as they’re only 99c / 99p until tomorrow!

Thank you for inviting me today, Cathie, to share a little about Beathan The Brigante, the 5th book in my highly acclaimed Celtic Fervour Saga Series. I’m getting really excited now since it officially launches tomorrow with Ocelot Press! It will be available in e-book and paperback from Amazon, and in paperback format via Ingram Spark for bookstore and library ordering.

Something different for your early readers – who might not yet have heard about my series, or haven’t yet read it – is that the e-book versions of Books 1-4  in the Celtic Fervour Saga series are reduced to only 99p/99c each, for the 5 days prior to launch day (20th Aug 2020) in a Big Bonanza SALE! The link for my Amazon author page to get access to each e-book is included below.

Book 5 Beathan The Brigante brings a number of the themes of the whole series to a full circle. These themes are intertwined across all 5 books, and they develop as my characters age and a new generation grows to maturity.

In Book 1, The Beltane Choice, Nara of the Selgovae, gives birth to a son who is prophesied to become a famous tribal leader. That son is Beathan which means ‘life’. Beathan’s clan flee northwards to Caledonia, to avoid the tyranny of Rome, when he is only seven years old. By the time he is nearly 13, he is warrior-trained. He goes to war at Beinn na Ciche where the Caledonian allies fight a pitched battle against the Ancient Roman legions of General Agricola, and readers of the series learn that he cannot be found after the confrontation! (Book 3)

Beathan The Brigante is Beathan’s story and what capture by the Ancient Romans has in store for him. Remember, though, that his name means ‘life’ and he really does do a lot of living between the ages of 13 and 17. However, Beathan the Brigante also continues the fate of the Ancient Roman general, Gnaeus Iulius Agricola (a main character in Book 4). Agricola drags Beathan, and some other high-ranking hostages, in chains all the way to Rome. Their journey is not a simple one, however, since Agricola has his own enemies.

The Celtic Fervour Saga series explores different themes of love: romance; family relationships; comradeship and even reluctant admiration for an enemy. In some form, all of these are to be found in Beathan The Brigante.  So… Does romance blossom for Beathan? Does he manage to find his kin again? (Which has been a desperate hope during all the years of his imprisonment.) He certainly does meet a feisty young Brigante woman named Torrin, though lasting love has never come easily for any of my Garrigill warriors.

But… isn’t that often the case in normal life?

I’ve loved creating my Garrigill warriors. I’ve continually endeavoured to create believable characters in credible situations, even when little is really known of what daily life was like almost 2000 years ago. I truly hope that readers love my Beathan in Beathan The Brigante. 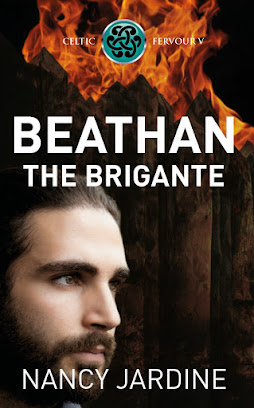 How can young Beathan of Garrigill – held hostage by General Agricola and dragged in chains to Rome – escape and wreak vengeance on his enemies?

Torrin is a strong-minded Brigante warrior-woman who forges her own future. She willingly takes care of him in a time of need, but her own plans are paramount.

Agricola's career is in tatters. Attempts on his life are plentiful, having lost favour with Emperor Domitian. His gods have abandoned him, though assistance comes from a surprising source.

Will Beathan gain his freedom to return to his kin in Caledonia? Will Torrin be by his side? And how will Agricola survive without the emperor's benevolence?

Beathan the Brigante is the fifth in the bestselling Celtic Fervour series.

Nancy Jardine writes historical fiction, time travel historical adventure and contemporary mysteries. When not writing or researching (a compulsion she can’t give up), she’ll be with her grandchildren, gardening, or reading novels. She loves to interact with her readers when regularly signing/ selling paperback versions of her novels at local Craft Fairs, and at larger event venues. She enjoys presenting author talks and gives formal presentations on her novels, and on Ancient Roman Scotland, to groups large and small.

She’s a member of the Historical Novel Society, the Scottish Association of Writers, the Federation of Writers Scotland, the Romantic Novelists Association and the Alliance of Independent Authors. She’s self-published with Ocelot Press.

You can find her at these places: