Today, I'm sharing an intriguing excerpt from The Devil's Crossing by Hana Cole as part of her blog tour with the Coffee Pot Book Club.

We're heading to medieval France. There's just so much history! And this one looks very interesting. I'm going to look it up.

I hope you enjoy the enticing excerpt from The Devil’s Crossing! 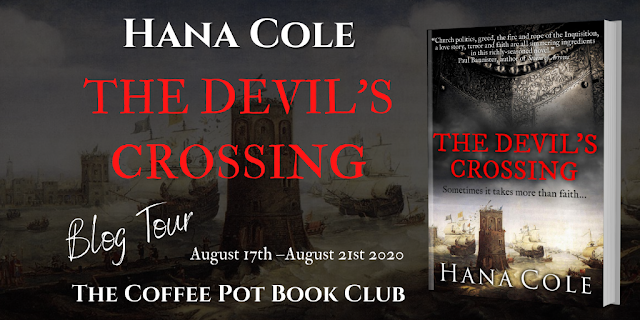 That evening, drawn by the noise from the streets below, Gui laid aside his manuscript and peered over the balcony. Three men shuffled in irons behind a plough horse. The prisoners had been sentenced to suffer for their own good. The purifying flame would cleanse their souls, and bestow a last chance of salvation before the fires of Hell. Although he had been clerk to the inquisitor for weeks now, this was the first time that he had witnessed a blood punishment and seen the faces of the convicts; faces just like any other. Among them, he knew, was Estève Le Coudray. A salt merchant from the Languedoc with a kind face and a hearty laugh who had been condemned by a testimony the Inquisition had paid for.

As the procession drew level with the balcony, someone in the crowd threw a chunk of masonry. It struck Le Coudray with such force that Gui heard the man’s jaw crack. Large crimson gobs spilled from his mouth. Gui felt his legs yield beneath him. A fist squeezed inside his stomach, releasing a wave of nausea - I did this.  Staggering backwards onto his bench, he sat, heart racing, as the jeers of the crowd built to a crescendo. Any moment now he would smell the smoke.

Transcription scattered at his feet, Gui ran his fingers through his hair, trying to chase out the images from the morning’s trial. But all he could think of was the girl as they took her away, eyes locked onto his as though there were no other living soul in the world. He jumped up and closed the shutter. The noise of the crowd dulled. Gui paced the cell. The day after next, Agnes Le Coudray would be in shackles, stumbling along the cobbles below to her final agony. So whoever knows the right thing to do and fails to do it, for him it is sin. The words of St James had his heart pumping hard against his better judgement.

The wooden shutters muffled the din, but they did not impede the vapours of oak moss, garlanded by spectators to veil the stench of burning flesh.  It was the same perfume that his mother used on her deathbed to disguise her decay.  Gui felt his gorge rise. He reached for the rosary attached to his belt. It was his mother’s gift to him just months before he entered the Cathedral.  On his twelfth birthday he had sat at her bedside, her icy hand in his, as death made its mask of her face.

‘Deliver the weak and needy from the hands of the wicked.’ She pressed the rosary into his palm. ‘For the love of God, may you never falter in your devotion to His mercy.’

Her last words told him of her pride at his calling. He wondered now, as he recalled that beautiful girl blinking back her tears, if his mother would still be proud.

Outside the crowd exalted. Plumes of smoke curled over the rooftops. Blood thrummed urgently in his ears. He pressed his palms together and drew a deep breath. Deliver the weak and needy. Fist clenched tight over the coral beads, he fled the room before the screams began. Sandals slapping on the stone, he hurried to the chapel and he prayed. First, for those poor souls who burned for denying Rome, then, head lifted to the Heavens, he remembered his mother.

Gui crossed the courtyard hooded in the cloak of a cathedral canon. He knew the corridors well enough to walk them blind. Palms slick with sweat, he stole into the scriptorium, a jumble of standing desks, loose parchments, and ribbon-bound ledgers. He tugged at a locked drawer of the Abbot’s desk until it yielded, rummaging through the seals and scrolls to find the key to the Cathedral’s prison. Then, fingers moving light, he thumbed through his documents until he found the pages he had transcribed from Agnes Le Coudray’s interrogation. The urgency of his endeavour pressed the air from his chest. Still, he paused to tear them up before stuffing them into his cloak. He peered out into the empty hallway. Quickening his pace, he glided over the cold quarry tiles to the courtroom, and the cell that lay below.

There was an hour to go before the Canons roused for Lauds - the noose of time was tightening around his neck. In a matter of hours her bones would be ash. He tasted bile at the thought. Before him, narrow steps spiralled down to blackness. Rust from the stolen key scratched at his damp palm. Barely breathing, he placed one foot on the stone, as though he were testing its solidity. Then he squeezed his eyes shut in prayer to a merciful God, and, heart in free fall, stepped down into the abyss.

Gui squinted through the door’s grille. Agnes was hugged into the corner of the cell, a shadowy outline in the near dark. She started at his presence, inching back further against the wall, as though there were succour to be found against the wet stone. A word of reassurance pressed at the base of his throat, but it would not come. Not in this place, with the Devil at his back.

One hand steadying the other, Gui weaved the crudely-cut key into the keyhole and hunted for the lock. Voices from outside echoed above.  A moment of panic: if I fail we will both die here. It summoned brute force and, clunk, the door yielded. Agnes inched forward until she was close enough for him to hear her breath. In a moment that seemed to stall the world, he felt her searching his intention. Then, bobbing her head, she pushed at the door. He reached for her hand. 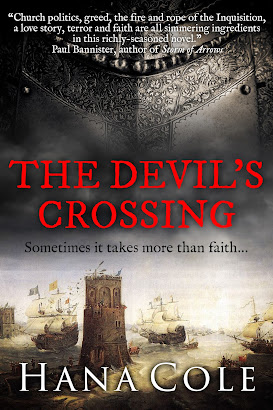 Gui is a troubled priest who has been shielding his secret family for years.

Agnes, his beloved, is a falsely-accused heretic he rescued from the Inquisition’s pyre.

Their son Etienne, unaware of his father’s true identity, is coming of age. Tired of his lowly shepherd’s life, he seeks adventure. The Crusade is the perfect opportunity to prove himself to the world.  He has no reason to suspect the men offering him passage overseas are not what they seem.

Discovering that Etienne has been sold into slavery, Gui and Agnes set off to find him. If Gui is ever to tell his son the truth, he must give up his comfortable compromises and fight the battle of his life against the institution he has served devoutly.

Meanwhile, Agnes guards a secret of her own; she must face her past in a confrontation with the venal Amaury, Lord of Maintenon, that will either set her free or claim her life.

If they are to save their son and expose the slave trade, they must risk everything to overcome the powerful enemies who will stop at nothing to protect their positions and silence them.

The Devil’s Crossing can be read for FREE with Kindle Unlimited subscription. 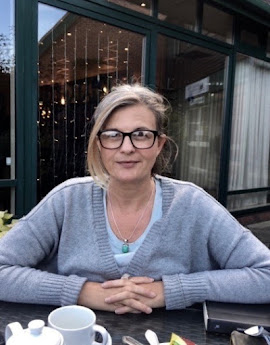 Hana Cole is a novelist and historian. Born in Essex to an Anglo-Italian family, she studied economics at the London School of Economics and history at Oxford where she gained her Masters.

After living in Italy for several years, she travelled widely in the Middle East and India before returning to the UK. She has worked as a film subtitle translator, financial analyst and a yoga teacher.

She now lives in Manningtree, Essex in the UK with her husband, daughter and two cats.