Today, I’m delighted to welcome historical fiction writer, Tony Riches, to my blog. He shares a fascinating post about the Golden Hinde, the ship that carried Francis Drake across the seas.

Prepare to discover an intriguing new series of novels, a treat for keen readers of Tudor fiction! 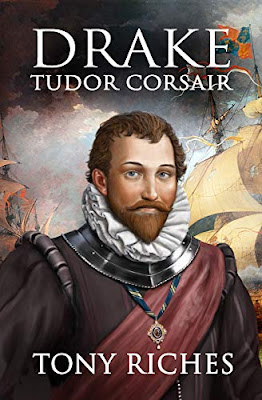 Francis Drake and the Golden Hinde, by Tony Riches,

I’d been planning an Elizabethan series for some time, as my aim is to tell the stories of the Tudors from Owen Tudor’s first meeting with Queen Catherine of Valois through to the death of Queen Elizabeth.

I decided to show the fascinating world of the Elizabethan court through the eyes of the queen’s favourite courtiers, starting with Francis Drake. I’ve enjoyed tracking down primary sources to uncover the truth of Drake’s story – and discovering the complex man behind the myths. 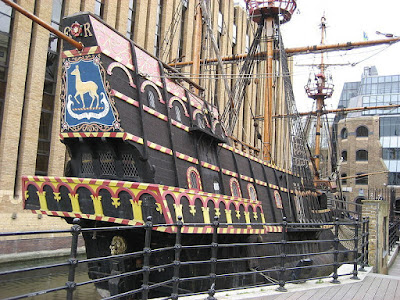 The scale of his achievement was brought into focus for me when I visited the replica of the Golden Hinde – Drake’s flagship, and the only one to survive his circumnavigation. Made to the same measurements as the original, the replica is only 121 ft 4 in long, and must have seemed vulnerable in the many storms Drake encountered.

Originally named the Pelican, (the symbol of Christ’s sacrifice favoured by Queen Elizabeth) Drake’s flagship was ahead of its time, and included everything he’d learnt from sailing ships of all shapes and sizes. Sleek and fast, she was renamed the Golden Hinde during his circumnavigation, after the emblem of his sponsor, Sir Christopher Hatton.

The only ship of his fleet to survive the voyage, the Golden Hinde was nearly wrecked on a coral reef, but Drake returned on the 26 September 1580, laden with enough gold, silver and jewels to make him one of the richest men in the country.

An appreciative queen ordered the Golden Hinde to be put on public display in a dry dock at Deptford on the south bank of the Thames in London. It was there that she had Drake knighted by the Ambassador of France – and a party of dignitaries fell into the dry dock when the walkway collapsed.

Francis Drake was a self-made man, who built his fortune by discovering the routes used by the Spanish to transport vast quantities of gold and silver. He had a special relationship with Queen Elizabeth, and they spent long hours in private meetings, yet was looked down on by the nobility even after he was knighted. His story is one of the great adventures of Tudor history. 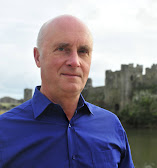 Drake – Tudor Corsair is available in paperback and eBook editions from:

Thank you, Tony, for such an enlightening article. Sadly, I've never had the chance to see the Golden Hinde, although I have been to visit the Vasa, the pride of the Swedish king, in Stockholm, and it was fascinating. The Hinde looks truly small, compared. It must have been a tight squeeze on board. 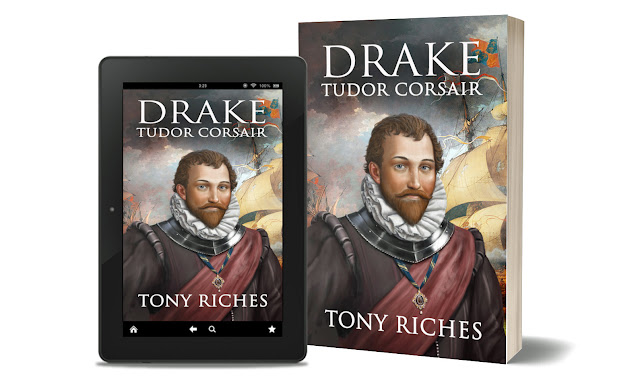