Today, I'm excited to take part in a fabulous cover reveal for The Mystery of Montague House, the first in a brand-new mystery series by Emma Davies.

Thank you to Rachel's Random Resources!

Here's the gorgeous cover! What do you think? I'll be looking into this, as I love a good mystery. And what’s even better? It features a Basset hound called Hamish!

The Mystery of Montague House

With enough rooms to fill a Cluedo board several times over, Montague House has often been the subject of rumour and gossip. Tales of strange goings on, an owner who disappeared one day and was never seen again, not to mention the treasure that rumour has it lies at its heart... But now the present owner has died and the house is to be sold. It looks as if the opportunity has come to finally settle the stories once and for all.

Clodagh Wynter doesn’t believe in ghostly goings on and tall tales of secrets. She has her feet very firmly on the ground and, tasked with the job of valuing and cataloguing the house and all its contents, she’s simply looking forward to working in such a glorious setting. And if she happens across a priceless painting, well, that’s just icing on the cake.

Andie Summer is a Finder of Things and desperately needs this job; she’s down to her last few tins of baked beans. So looking for hidden treasure sounds right up her street, even if there was something very fishy about the mysterious Mr Mayfair who hired her. Because it’s just like she said to her faithful Basset Hound, Hamish; I saw something out of the corner of my eye as I was leaving, and you know what that means. It’s never good news when I see something out of the corner of my eye...

As the unlikely pair are thrown together, it soon becomes very clear however that they are not the only ones searching for the treasure. And they’re going to need all their ingenuity, resourcefulness, not to mention chocolate biscuits, if they’re ever going to untangle the web of secrets that surrounds Montague House. One that reaches even further than they ever thought possible... 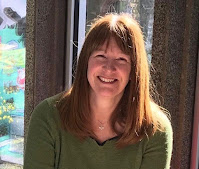 After a varied career, Emma Davies once worked for a design studio where she was asked to provide a fun and humorous (and not necessarily true) anecdote for their website. She wrote the following: 'I am a bestselling novelist currently masquerading as a thirty-something mother of three.'

Well, the job in the design studio didn't work out but she's now a fifty-something mother of three and is happy to report the rest of her dream came true.

After many years as a finance manager she now writes full time, and is far happier playing with words than numbers. She lives with her husband and three children in rural Shropshire where she writes in all the gaps in between real life.